Recording of the week: how to avoid being puked on by a fulmar

It’s always advisable to keep your distance from wild birds, particularly during the breeding season. The main reason, of course, is to avoid causing any distress to the birds. Chicks are being born, predators are lurking and emotions are running high. So the last thing they need is to worry about pesky humans getting in the way.

Staying away from nesting birds is also a good idea from a self-preservation point of view. Now you may be thinking, ‘But what could they do to me? Start making those annoying alarm calls? Maybe try to fly at me? I can cope with that.’ These responses are true for many birds. But if you happen upon a pair of Northern Fulmars, you can expect something much worse. They will puke on you.

I’m happy to report that no puke was involved in the making of the following recording. Our recordist, Ian Christopher Todd, respectfully kept his distance and was rewarded with this tranquil scene. The cackling calls of nesting fulmars are joined by the gentle lapping of the North Sea and the gruff barks from a nearby Great Black-backed Gull. 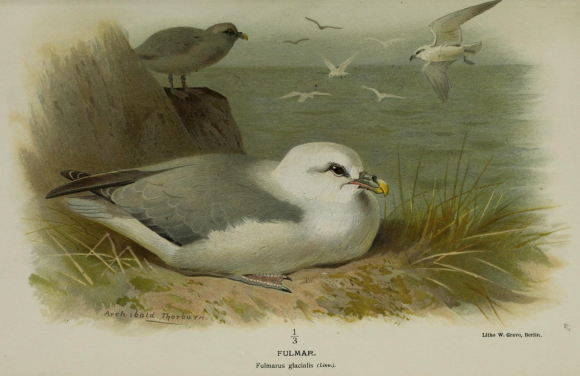 Fulmars nest on steep cliff edges and so you probably won’t need to worry. But do keep this is mind when you next visit the British coastline. For if you get puked on by a fulmar it will be oily and smelly and nobody will want to sit next to you on the journey home.

Recording of the week, Save our Sounds, Sound and vision, Wildlife sounds