Recording of the Week: The world’s rarest traditional musical instrument? 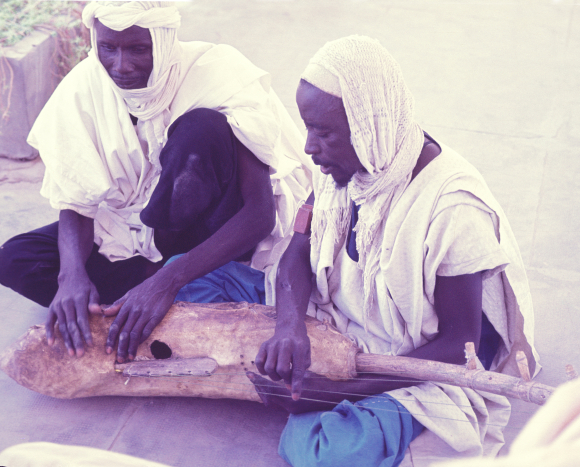 The focus of this week’s recording is unusual in a few different ways. It’s a recording of the biram, made in the city of N'guigmi in Niger, probably in the mid- to late-80s. The biram is a large boat-shaped arched harp played by the Buduma people, traditionally fishermen and cattle-herders on the shores and islands of Lake Chad. While similar harps are fairly common in Central Africa, the biram is the only one of its type in West Africa, and may have even evolved from an instrument of the Ancient Egyptians1.

For most instruments, the relationship between object and operator is simple – one instrument has one player. The biram is not quite so simple. In fact, it has two players, both making a completely different sound. One musician, the master, holds the neck of the harp and plucks the melody on its five strings. The other musician, usually a pupil, holds its body and drums a rhythm on the instrument’s skin soundboard and wooden trough. The combination of the deep thrum of the strings and the sharp clack of the body means that often the biram doesn’t sound like a harp at all, but more akin to the ngoni bass-lute of the Malian Bamana people. The biram is both a string instrument and a percussion instrument, literally depending on where you sit. 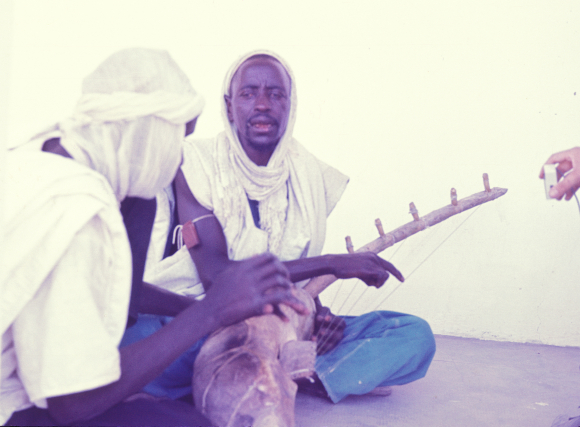 Since this recording was made, however, the biram very nearly became extinct. As Lake Niger shrinks and its shores recede, the Buduma people are dispersing and their traditional culture and music are being lost. By the early 2000s, there was just one biram player left, a man named Boukar Tar. With no young Buduma musicians interested in learning the instrument, it seemed as if it would die with him. However, in 2002, Tar was approached by Mamane Barka, a Toubou musician already famous as a player of the gurumi lute. Tar taught Barka all he knew in the four years before his death on the condition that Barka would show the biram around the world. And he did: he performed the biram across Europe and the US2 and released the instrument’s very first album3. Barka himself died in 2018, but not before teaching the art of playing and making the biram to several students – this fantastic instrument has been pulled from the brink, although its future remains in the balance. Only time will tell if the biram will continue to recover.