'The most important thing is to hear the voice of the Earth': revisiting a Buddhist temple in Fukushima

This week (29 April – 5 May) in Japan welcomes the arrival of a cluster of national holidays known as Golden Week. Today (4 May) is celebrated as Greenery Day or Midori-no-hi (みどりの日). This is a day that encourages the people of Japan to embrace the environment and take a moment to reconnect with the natural world. 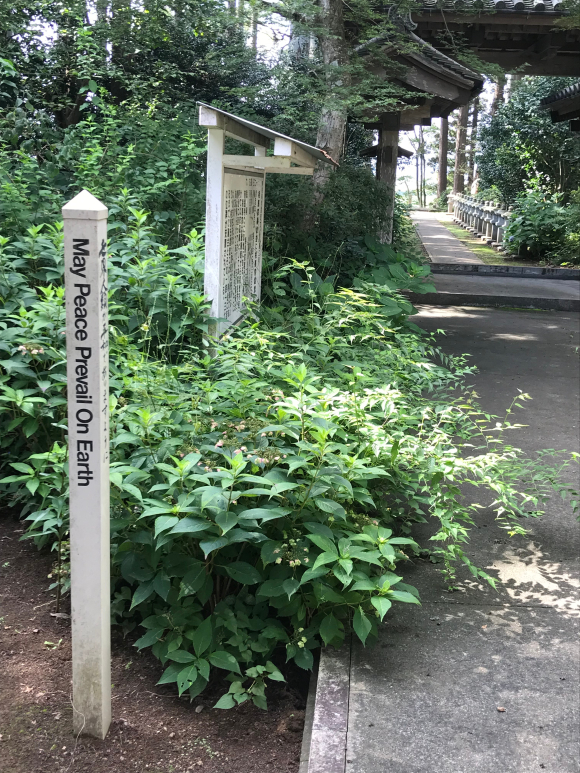 'May Peace Prevail On Earth' - An inscription written in both Japanese and English on a sekitō (石塔), a stone pagoda that welcomes visitors at the entrance of Dokeiji Temple, a Buddhist temple located in Minamisōma, Fukushima Prefecture, Japan.

'The most important thing is to hear the voice of the earth', says Tokuun Tanaka – head priest of Dokeiji Temple, an 800-year old Sōtō Zen temple situated in the Odaka district of Minamisōma, roughly 20km from the site of the Fukushima Daiichi Nuclear Power Station on the north eastern coast of Japan. After the Tōhoku earthquake struck on 11 March 2011, the tsunami and nuclear disaster which followed devastated this region.

A 30km mandatory evacuation zone left many residents with no choice but to leave immediately. Their homes, their communities and their environment were all damaged irreparably. The evacuation order was lifted in 2016 but there remains a great deal of uncertainty as to the long-term effects of the radiation damage there, much of which is still present in the towns and villages surrounding Fukushima, as well as in the marine and forest environments. The forests occupy 75% of the fallout zone and are still considered too dangerous to begin the process of decontamination. What is certain is that it could take many years, if not generations, before the regenerative healing powers of nature begin to take effect.

With this humble song, titled Itsukushimi (慈しみ) - a word that can be interpreted as compassion, love and mercy - Tokuun brings together Buddhist scripture from the Sutta Nipata, an ancient text considered to be over 2500 years old, with the modern stylings of folk spirituals on his acoustic guitar. 'The singer-songwriter is Buddha' he tells me in a friendly, jovial tone whilst seated on the tatami floor of Dokeiji temple’s Butsu-dō (main hall). It is a song that Tokuun sings alone at night, surrounded by a gentle chorus of night crickets on this particular late summer evening of 5 September 2019.

I had the opportunity to visit Tokuun and make this recording whilst doing field work supported by the World and Traditional Music section of the British Library Sound Archive. The resulting recordings can now be browsed on the Sound and Moving Image catalogue as the Mat Eric Hart Japan Collection (C1872).

Slowly, the members of this temple community are returning, some after many years of having been displaced, but sadly there are also those who will never return. Every month, Tokuun welcomes visitors to Dokeiji Temple, inviting them to sing together with him this song of compassion, love and healing.

In Tokuun’s own words: 'Our way of life is being challenged. From growth to maturity, let us be part of the change. Let us take the right path without concern for profit or loss. It is time for the whole of humanity to evolve based on solidarity and harmony beyond self and society.'

The Mat Eric Hart Japan Collection (C1872) explores contemporary practices and rituals of spiritual Japanese individuals and communities, and further aims to examine, from a sonic and artistic perspective, the relationship that exists between nature and spirituality within Japanese culture. The collection includes field recordings of both traditional, contemporary and classical Japanese and Ainu music, Buddhist chants, Shinto rituals, Shugendo and Yamabushi ceremonies. These recordings were made between August and November 2019 at various locations across Japan and her islands.