Recording of the week: A Yanomami ceremonial dialogue

In 1978, the writer, musician and scholar David Toop travelled to the Upper Orinoco region in the Venezuelan Amazon to record the Yanomami indigenous people and their songs, rituals and ceremonies.

While these recordings were released on the album Lost Shadows: In Defence of the Soul (Yanomami Shamanism, Songs, Ritual, 1978), Toop also kindly donated the unedited field recordings to the British Library, where they have been digitised through the Unlocking Our Sound Heritage project. Toop writes:

I’m very happy that my Yanomami recordings will be available for digital access for two reasons. One is that the Yanomami are again undergoing a crisis due to the combined effects of the pandemic and a ruthless encroachment into their territory by illegal mining, so any attention focused on the Yanomami is a good thing. The second reason is connected to the first. I believe all people can benefit from exposure to the rich and diverse forms of encounter, counsel and negotiation that exist or have existed in world cultures, unfamiliar or strange as they may seem, because they can suggest alternate ways of listening to others, gaining understanding and resolving apparently intractable problems. Any narrowing of listening models is a bad thing. 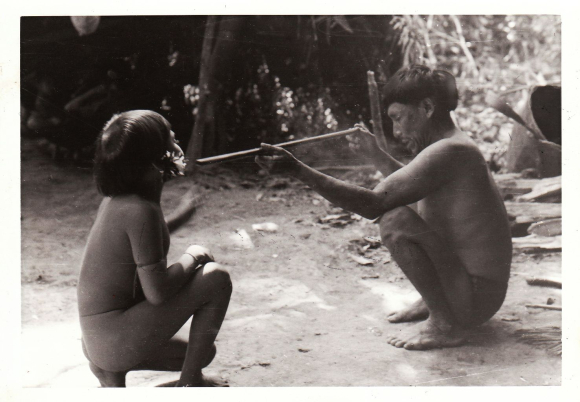 Torokoiwa (a Yanomami shaman) and daughter. Photograph by Odile Laperche.

One of the recordings that stood out to me was his recording of wayamou – a type of ceremonial dialogue that the Yanomami use to negotiate relationships, maintain peace and resolve conflicts between different communities.

Wayamou is conducted at night and is performed in pairs, with one member from each community taking part. One participant will lead, and depending on whether the communities are on good or bad terms, he will criticise and reprimand the other participant, or submit requests and proposals to them.

The speaker will adopt a heavily metaphorical manner of speaking to conduct these conversations diplomatically and avoid addressing sensitive subjects too directly. The other participant will then repeat the phrases, words and syllables uttered by the speaker – sometimes identically and sometimes with slight variations – to show agreement with the speaker or at least an understanding of his point of view.

Afterwards, the participants swap roles so both have a chance to speak. The pair is then replaced by series of other pairs and discussions continue throughout the night.

It is a duel of persuasion and negotiation, where participants have the opportunity to put words, ideas and desires in each other’s mouth. Ideally, by dawn, solutions or compromises to the communities’ problems will have been reached.

The controversial anthropologist Napoleon Chagnon once described wayamou as: “something like a fast game of Ping-Pong, with the melodic, staccato phrases as the ball.”

We hear how the speakers throw these words and phrases between each other, creating colliding rhythms and echoing crescendos that are abruptly punctuated with sharp accents.

At certain points, you can even hear the respondent replying so fast that he is speaking at the same time as the lead participant, guessing what the lead is saying before he has even said it.

I was so enthralled by this amazingly fast and complex dialogue that I didn’t even stop to think about what they could be saying. However, when reading the liner notes to Lost Shadows, I was surprised to learn that there was a false start to the recording:

The recording seems to be going well, but Emilio jumps up, clearly angry, and stops them. What they have been saying is that the foreigners are stupid to want to record their music and they are going to trick us out of many gifts.

Perhaps this should not come as a surprise. Here the wayamou had been stripped of its social function: there was no relationship to negotiate, no conflict to resolve or peace to maintain. When asked to perform under these conditions, what would there be to speak about?

Even if they are just talking about how foreigners are stupid to want to record their music, it is still an undeniably captivating recording ... and I don’t think we are stupid for wanting to listen to it!

If you are interested in learning more about the Yanomami, photographer Claudia Andujar’s exhibition The Yanomami Struggle will be running at the Barbican from June 17 to August 29 2021. Filmmaker and anthropologist Luiz Bolognesi’s film A Última Floresta (The Last Forest) will also be showing at the Berlinale on 19 and 20 June, 2021.

Americas, Digitisation, Recording of the week, Save our Sounds, Sound and vision, World & traditional music