Recording of the week: Louis Moholo-Moholo’s first encounters with jazz

This week we take a look at an interview with legendary jazz drummer, Louis Moholo-Moholo. 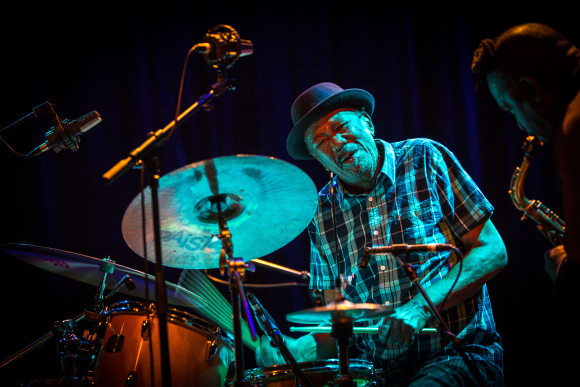 Born in Cape Town, 1940, Moholo-Moholo has had an illustrious jazz career spanning over 50 years. He is known for his influential band, The Blue Notes, formed with Chris McGregor, Johnny Dyani, Nikele Moyake, Mongezi Feza and Dudu Pukwana in 1960s Cape Town. Leaving South Africa to tour Europe in 1964, the sextet was characterised by their experimental and creative approach to the genre, establishing themselves as one of the most important free jazz bands of the time.

Forming a band like this under an apartheid government had its challenges, not least because Blue Notes was an interracial band during a time of segregationist policies. Also, the state of emergency imposed by the government in 1960 limited the number of people in gatherings to four. As a sextet, this was risky – and Moholo-Moholo has stated in past interviews that he would sometimes play behind a curtain when the band met.

Read the transcript for the interview.

In this extract, Moholo-Moholo provides insight into his formative musical education. His early encounters of rhythm came from running his ruler against a fence on his way home from school. The influence came from BBC Radio, playing from the naval base in Cape Town, featuring American greats such as Charlie Parker, Sid Catlett, Ted Heath and Duke Ellington. Although jazz had reached South Africa in the early 20th century, the local scene was dominated by local media controlled by the white minority.

Who could have imagined that a ruler and BBC Radio would help unlock the raw talent of Louis Moholo-Moholo?

This recording comes from the Oral History of Jazz in Britain Collection digitised by the Unlocking Our Sound Heritage project. It can be found alongside treasures from the sound archive, featured on our brand new website, History of Recorded Sound. Visit the site to discover more.