Since the end of August 2021 a new British Library audio exhibition 'Listen: The Story of Recorded Sound' has been open to visitors to Pingshan Library, Shenzhen, China. It will run until 20 February 2022.

Visitors will be able to hear an eclectic mix of sounds from the British Library’s collection of over 6.5 million recordings of spoken word, music, wildlife and the environment. Recordings date from the 1880s to the present day.

The exhibition was brought to Pingshan Library in partnership with the China-Britain Business Council (CBBC) and Pingshan Media Centre (PMC), alongside Pingshan Global Promotion Centre (PGPC), and was sponsored by the Publicity Department of the CPC Pingshan District Committee of Shenzhen (PDCPC).

This is the first time that the British Library has brought an audio exhibition to China to be experienced by Chinese audiences. Please see our Chinese-language page about the exhibition for more. 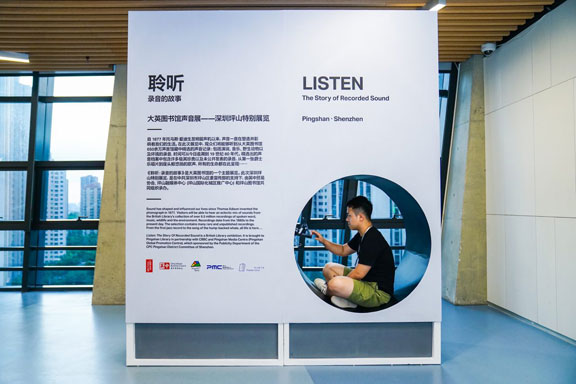 In a novel initiative to help publicise the exhibition, the CBBC collaborated with students from the Innovation Lab of Art and Technology, Shenzhen University. The students were invited to develop a set of 10 promotional postcards. The results were quite striking and original, and a selection is reproduced here. 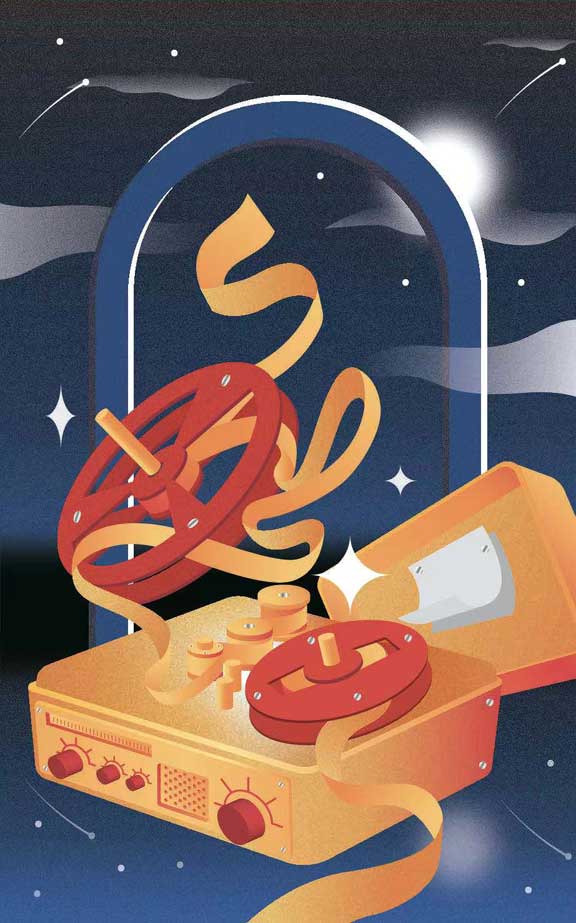 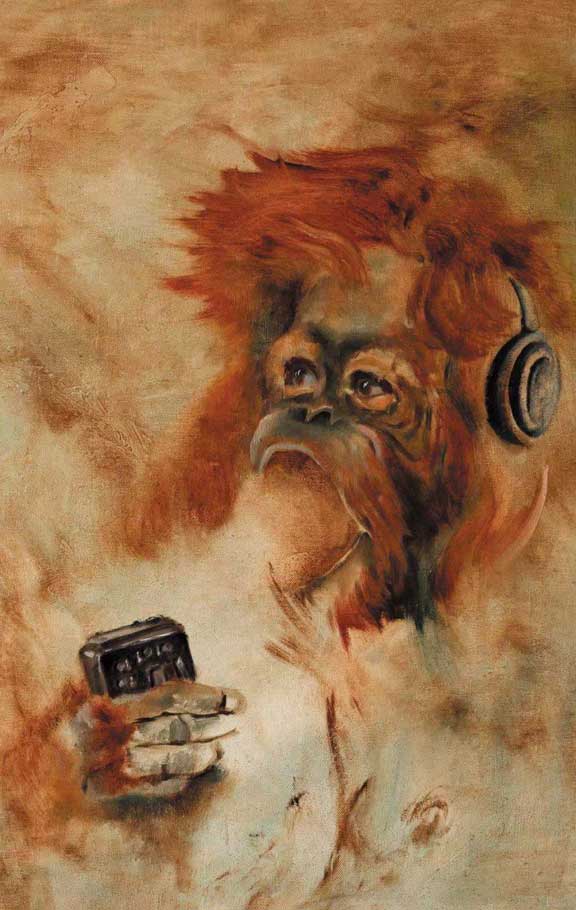 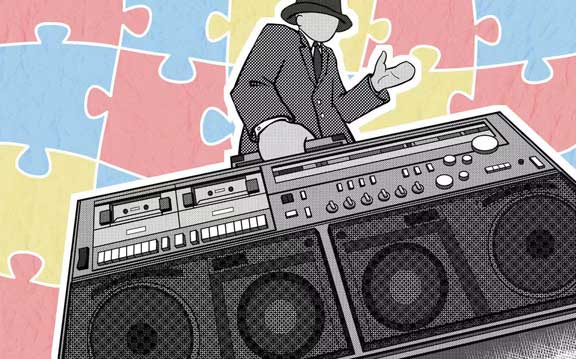 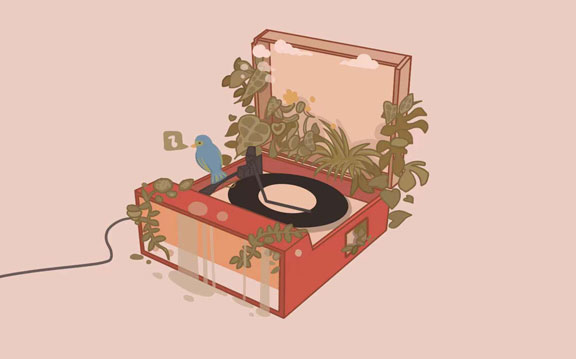 Recording of the week: I nearly went bozz-eyed when I saw this!

After a summer in which most of us have holidayed in the UK, I’ve been fascinated on my travels to note a growing enthusiasm for commercial products that celebrate local speech and identity. Gift shops and craft stores now frequently sell souvenirs such as tea towels, T-shirts, mugs, beer etc. featuring local phrases or playful re-spellings of everyday expressions to reflect local accents – a phenomenon linguists call ‘dialect commodification’.

During a recent trip to Ashbourne, I was delighted to spot this framed poster of ‘The Derbyshire Periodic Table’. The display replicates the layout of the conventional periodic table, but chemical elements are replaced by a local expression with a correspondingly made-up symbol and atomic number. The entry I find particularly striking is located at the bottom of the red group on the left-hand side – the symbol Bz with the atomic number 73 representing boz-eyed [= ‘cross-eyed’]. 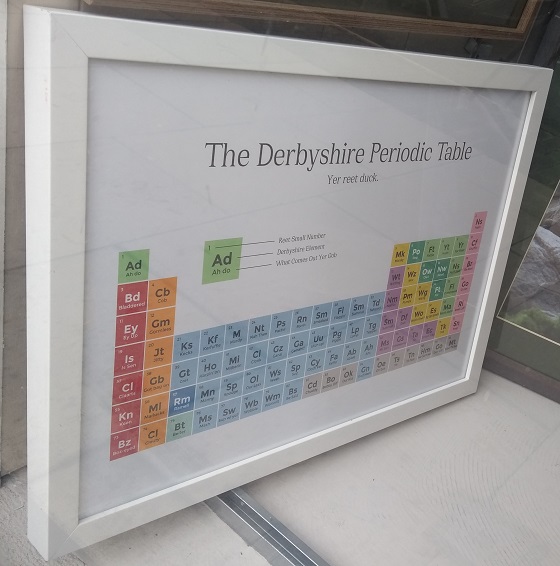 The 1950s Survey of English Dialects (SED) documented several regional variants for ‘cross-eyed’ including glee-eyed in the North East, skend in Lancashire, squint-eyed in East Anglia and the West Country and boss-eyed in the Midlands and South. This regional distribution of boss-eyed is confirmed by a contribution to the Library’s WordBank by a speaker from Barnet, Hertfordshire, who was surprised when she moved to Merseyside to discover that speakers there were unfamiliar with the term:

Intriguingly, although ‘boss-eyed’ was recorded frequently in the SED across the southern half of England, there were only two localities where informants supplied a pronunciation with a medial <-z-> sound – one in Lapley, Staffordshire, the other in Kniveton, Derbyshire – a village just outside Ashbourne, which is a convincing explanation for the alternative spelling in the Derbyshire Periodic Table. 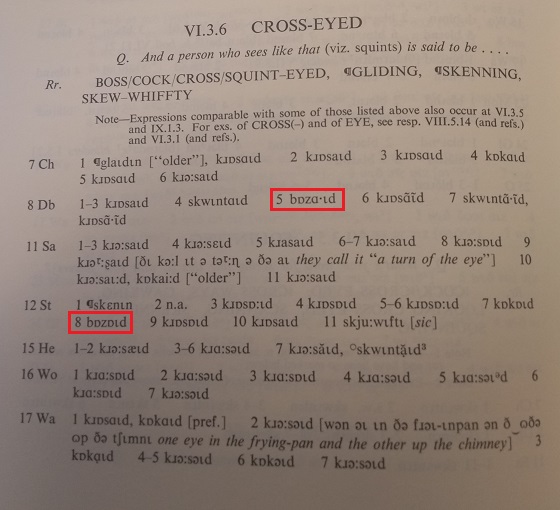 Accents & dialects, Recording of the week, Save our Sounds, Sound and vision