Recording of the week: Dog team or engine power? Sleds and other subjects in 1940s Alaska

During my time working as a cataloguer on the Unlocking our Sound Heritage (UOSH) project, I have been fortunate to catalogue a diverse range of oral history collections. The majority of the interviews in these collections are several hours long, recorded across a number of tapes and over a number of days. Occasionally, you will come across a short but sweet recording like this one.

This recording is a ten minute conversation between Abraham Lincoln, an Inuit fisherman (not the 16th president of the United States) and Pete Severnay, a Norwegian sailor. It took place in the city of Kotzebue, Alaska, just above the Arctic Circle, in the winter of 1948.

Despite its short length, the recording covers quite wide ground.

We discover that Abraham has been staying with Pete, who has been travelling across North America for the past few years.

The men discuss several topics. Pete thinks that he might stay in Kotzebue, but it all depends on the fishing. He also complains about the lack of employment opportunities in the area, and that any available jobs pay too little - one dollar an hour.

Abraham has a different outlook; one dollar an hour is a perfectly reasonable wage for the locals to live on. Pete is fishing to keep himself busy, but his main interest is gold prospecting – he believes that there are large amounts of gold in the area.

Unsurprisingly, the two men discuss the weather. Pete isn’t too bothered by the cold. After all, he’s been travelling in wind and storms during his entire time in Alaska, with visibility so poor that he hasn’t been able to see his hand in front of his face at times. He has also built his own sled.

In the audio excerpt below, Abraham amusingly mistakes Pete’s sled for a table, and they start a lively discussion about dog team sleds versus engine-powered sleds.

You will be able to hear a slight hum in the background which comes from the recording device: 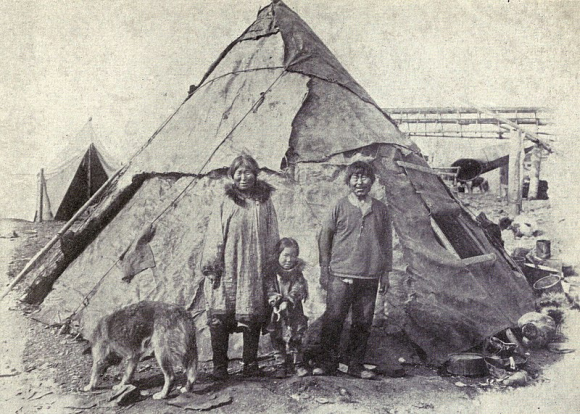 An Inuit family with an Alaskan Malamute, c. 1915. Photograph from Wikipedia. Original source: W. E. Mason. Malamutes are the sled dogs that are mentioned by Abraham.

I could not find any information about Pete Severnay online, although I did find some more information about Abraham. He lived in Kotzebue with his wife, Blanche, where they raised two sons and two daughters. His birth date is listed as around 1887, so he would have been in his early sixties at the time of this recording.

The fact that we know so little about the two men and the recording is irrelevant. In fact, the anonymity adds to the overall appeal. The important thing is that the two men have come together to share their unique knowledge and experiences. They may be different in terms of age and culture, but it is clear from their words that they have respect for each other’s differences.

This recording offers a glimpse into what life was like for the inhabitants of Alaska during the time but also gives insight into the life of an outsider venturing into an isolated community. Who knows? Perhaps this conversation was the start of a friendship lasting the rest of their lives.

Digitisation, Oral history, Recording of the week, Save our Sounds, Sound and vision