The Eric Raff 1924 Efate, New Hebrides Cylinder Collection (C83) is a set of twelve black wax cylinders recorded in 1924 on the island of Efate in Vanuatu. The collection was previously known as the RAI Vanuatu Cylinder Collection as the cylinders came into the Library from the Royal Anthropological Institute in 1983, but with no documentation as to when they were recorded or by whom. 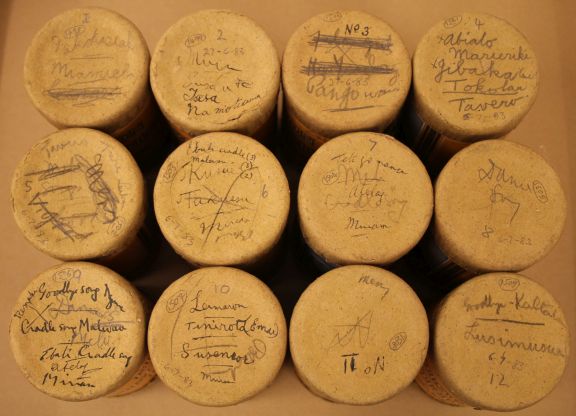 Above: The cylinders of the Eric Raff 1924 Efate, New Hebrides Cylinder Collection (C83)

The cylinders were accompanied by 28 sheets, formerly held together by small rusty pins, but there was no information about the recordist or the date. The papers are carefully typed out translations and transcriptions of songs and stories from various villages on Efate. 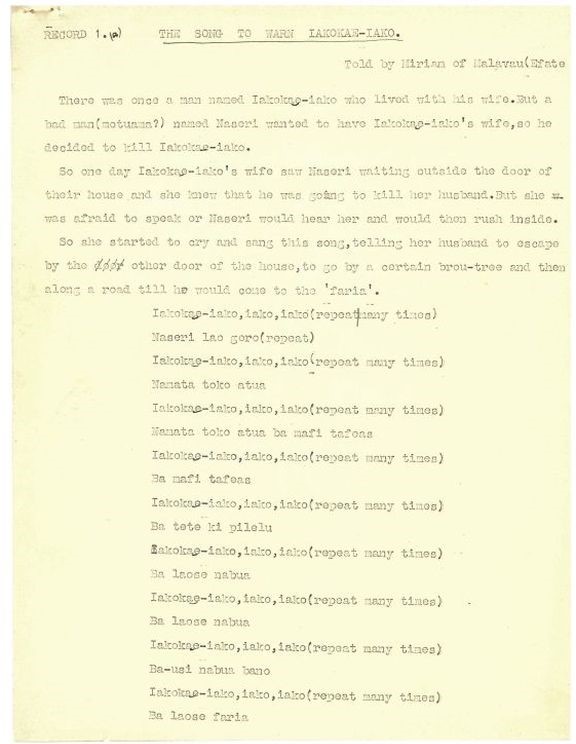 Above: A transcript of the recording "The song to warn Iakokae-Iako" as performed by Miriam of Malavau. This is the third page of the original documentation for the cylinder collection. Held by the British Library's World and Traditional Music section.

We started the historical research by compiling a document of everything we knew about the collection, and a list of any possible recordists, from anthropologists to government officials, from missionaries to traders, who spent time on Efate between 1898 and the 1930s. We circulated this document to researchers working in Vanuatu today.  We looked at handwriting, and other likely characteristics of the recordist. Chris Ballard at the Australian National University helped us to deduce who the recordist was. We can now say that the cylinders were recorded by Eric Maitland Kirk Raff (1892–1927), an Australian Presbyterian missionary who was based at Vila on Efate from 1917 to 1924.

Eric was born in Victoria, Australia, on 29 March 1892. He was ordained in the Presbyterian Church in Melbourne on 18 October 1916, and formally appointed as minister of the Margaret Whitecross Paton Memorial Church in Vila on the same day. On 9 December 1916, he married Ruth (née Baird), and on 17 January 1917, they left Australia for Vanuatu, then called the Anglo-French Condominium of the New Hebrides.

Sarah Walpole, archivist at the RAI, found correspondence from 1927 between Ruth Raff and Sir Everard im Thurn, a former President of the RAI, which gave us a much better understanding of this collection. Ruth noted that Eric made thirteen 4-minute Edison phonograph records “in Vila … early in 1924” (Raff 1927b). The collection only comprises twelve cylinders now; we do not know what happened to the thirteenth. The cylinders are unusual as they hold 4 minutes of recording as opposed to the more usual 2 minutes; the phonograph used to record them operated at a faster turning speed. These particular kind of cylinders were very fragile, which explains why three of the twelve surviving cylinders are badly broken. We do not know how or where Eric obtained the phonograph or the cylinders.

The Raffs left Efate in 1924 due to Eric’s ill health, and travelled to Scotland. Later that year, Eric wrote to both the Edison Bell Works and the Gramophone Company as he wanted to have permanent copies of the cylinders made; neither company could help. Ruth also noted that they tried to enlist the help of Alfred Cort Haddon – “a friend at Cambridge (an ethnologist whom we had met in the Islands) tried to interest Dr Haddon, but apparently nothing came of it – I think they said their funds were low!” (Raff 1927b). Haddon led the 1898 Cambridge Anthropological Expedition to Torres Straits and the cylinders produced during this expedition are now in the collections of the British Library’s Sound Archive. Further information on this collection, known as C80, can be found in this Sound & Vision blog post.

In July 1926, Eric received a reply from Thomas Joyce, Deputy Keeper of the Department of Ceramics and Ethnography at the British Museum, indicating that he would purchase Raff’s “New Hebrides Records” at 5 shillings a piece (Joyce 1926).

Eric died on 22 March 1927 in Bournemouth at the age of 34. Ruth was determined that the “valuable phonographic records of old native songs (both legends & songs fast dying out)” collected by her husband should not be lost to science (Raff 1927a). During a stay in Edinburgh in April and May 1927, she typed up all of the legends to give to Thurn; she mentioned “more interesting notes on early Efate” that she could send to him later (Raff 1927d). It is not clear whether this material has survived. It is also not clear what happened to the cylinders. Ruth may have sold them to the British Museum when she visited London in early June before her departure for Australia on the 16th June (Raff 1927c).

The level of detail on the accompanying documentation, including corrections on the covering List of Records as well as on the transcriptions and translations, indicates that both Eric and Ruth were familiar with the languages represented in the collection.  This documentation indicates that there were originally 30 songs recorded. Six performers are noted by name and village: Miriam of Malavau, Meny of Fila, Turi of Leleppa, and Kaltaban, Leiboni, and Tavero of Meli. Four songs were performed by “Pango women.” Nganga, probably a chief of Meli, is noted as the translator of three songs. Initial research indicates that most of the songs are from the languages of North Efate (Nakanamanga), South Efate (Nafsan) and Mele-Fila (specifically the Meli dialect). 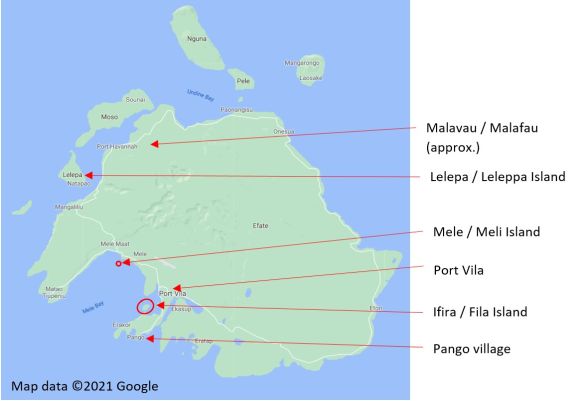 Above: A map of Efate highlighting Port Vila and the villages of the C83 Vanuatu performers. Map data ©2021 Google.

The clip that we would like to share with you today is from the first song on cylinder C83/1498, Iakokae-Iako, by Miriam of Malavau.

Research to find out more information about the performers and the genres of the songs and stories told, as well as the languages featured in the recordings, will be done by our project partners at the Vanuatu Cultural Centre / Vanuatu Kaljoral Senta (VCC / VKS). Ambong Thompson is Manager of the National Film, Sound and Photo Unit that manages the Vanuatu Cultural Centre’s collection of film and audio recordings and photographic collections of cultural events, ceremonies, celebrations, performance, practices and activities. Through the True Echoes project, digital copies of Eric Raff's 1924 recordings will be accessioned into the VCC collection. 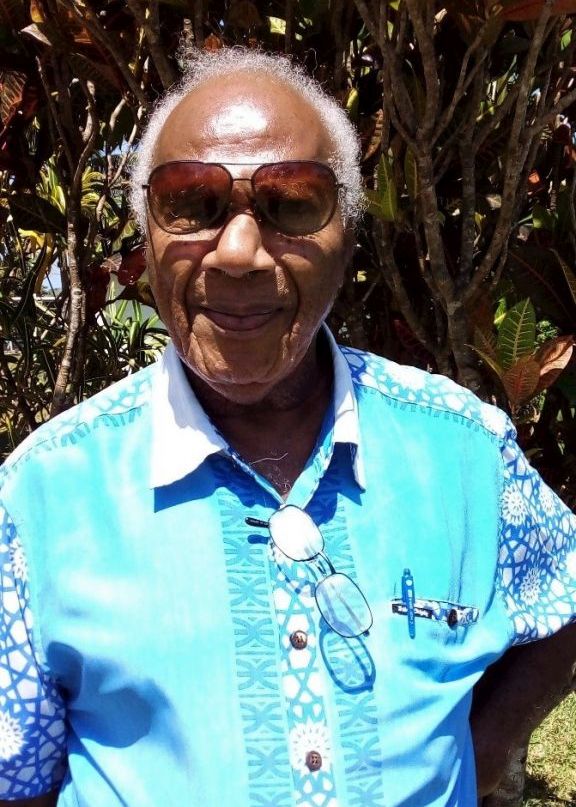 “We have already identified three fieldworkers from Mele, Ifira and Pango to work with staff from Vanuatu Cultural Centre… We have already spoken to, and had a good response, from Mele village. Some people from Mele Village have heard about the project and were very delighted.”

The VCC is working to identify the right people and equipment to undertake participatory research for this project. Ambong noted that these are “very old recordings and will make a major contribution towards our collections”.

Posted by Rebekah Hayes at 9:45 AM