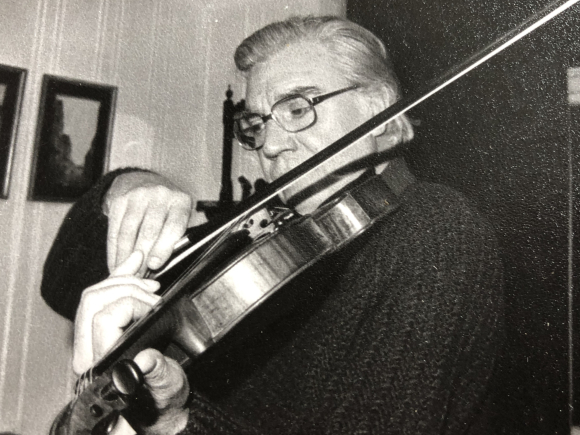 The violist Ken Essex has died aged 101.  Millions unwittingly heard him playing the music to the television series ‘Fawlty Towers’ and it is inevitable that obituaries have highlighted his recording of the Beatles song ‘Yesterday’ on which he was part of the string quartet, but these were a very small part of Ken's incredibly illustrious career as a musician.

In 2015 I interview Ken about his life and work.  At the age of 94 he collected me from the station in his car, drove me to his home and talked for two hours in great detail without the aid of notes of any kind.

Ken was born in Hinckley, Leicestershire in 1920.  He studied the violin and viola with various local teachers and won some local competitions.  In those days, as soon as children were able to work, they were responsible for contributing to the family income.

He then had the opportunity to audition for a scholarship at the Royal Academy of Music in London.

Benjamin Dale (1885-1943) was the first in a long line of important musicians that Ken played with.

His father could only afford to pay for one term at the Royal Academy of Music, but during his time there Ken was awarded many grants and bursaries to continue for a full course of tuition.

After service during the Second World War Ken joined the London Philharmonic Orchestra.  At his first rehearsal he played Stravinsky’s Petrushka under Ernest Ansermet.

Ansermet also directed the first production at Glyndebourne after the War - Benjamin Britten’s new opera written for Kathleen Ferrier, ‘The Rape of Lucretia’.  Ken was allowed to break his contract with the LPO to do this job.

Another great conductor Ken worked under during his first few weeks with the LPO was the Italian Victor de Sabata (1892-1967).

One of the first recording sessions he took part in was for Decca when Eduard van Beinum (1900-1959) conducted Brahms's Symphony No. 3 at Walthamstow Town Hall in March 1946.

Here is the opening of the third movement of that recording.

For many years Ken was violist in the Hurwitz Quartet and part of the String Trio of Amaryllis Fleming.  He often played in the Goldsborough Orchestra, London Chamber Orchestra with Anthony Bernard, the Riddick String Orchestra and the very successful Boyd Neel String Orchestra.

In the early 1950s young artists could appear on BBC radio once they had passed an audition.  Ken relates his extraordinary first experience of being on the air.

Another great conductor that Ken worked for was Leonard Bernstein (1918-1990) who came to London for a television recording of his new work ‘Trouble in Tahiti.’  Ken had previously played Mozart's Sinfonia Concertante in New York whilst on tour.

During the late 1950s Ken joined the London Symphony Orchestra playing under Malcolm Sargent, Basil Cameron, Josef Krips and John Barbirolli.  Although he continued to play in chamber ensembles and string quartets such as the Amadeus Quartet, Aeolian Quartet, Gabrielli Quartet, Amphion Quartet, Allegri Quartet and Delmé Quartet, he decided in 1960 that, with his excellent sight reading skills, freelance and session work was preferable to being contracted to a symphony orchestra.  This was how the Beatles job happened.

International stars from the popular field that Ken worked with included Frank Sinatra and Bing Crosby.

Ken also played on hundreds of film scores from the early 1960s onwards.  Dimitri Tiomkin (1894-1979) and Bernard Herrmann (1911-1975) were two composers that came to London from the United States to conduct their scores.  Ken played on the score to 'The Guns of Navarone' and also recorded Herrmann’s Clarinet Quintet in 1974 with Robert Hill and the Ariel Quartet for Unicorn-Kanchana.

One of his most fruitful collaborations was with Carl Davis.   Ken remembers recording scores for television and film productions by Davis as well as those he wrote for many of the restorations of the great films of the silent era.

Posted by Jonathan Summers at 1:31 PM