Recording of the week: Preserving the Peruvian jarija

Last autumn, while cataloguing the Neil Stevenson Collection made in Peru in the early seventies, I gradually started to develop a mental image of Santiago de Chocorvos, a village in the central Peruvian highlands. A few weeks ago, this image was unexpectedly brought into focus by an email containing photographs and accompanying comments sent by Neil himself. It was surprisingly moving to put faces to the voices that had become so familiar. 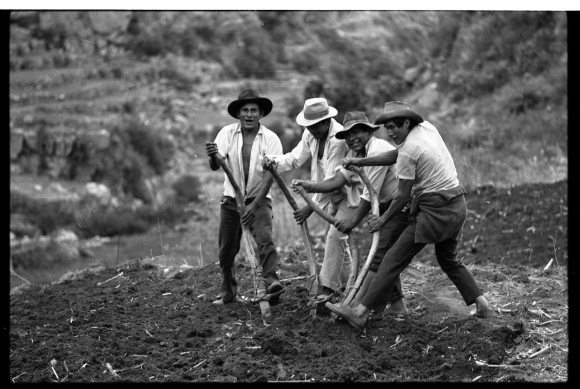 Maize sowing on terraces in Peru. Men work in groups of three or four turning the earth with a foot-plough - the leaf of a lorry spring lashed to a wooden stick. They chant in rhythm to synchronise the back-breaking work. © Neil Stevenson

The collection consists of Dr Neil Stevenson’s field recordings recorded in and around the village of Santiago de Chocorvos, Huaytará, Huancavelica, Peru, between 1971 and 1972. He was there conducting research on concepts of disease and the recordings mostly document the music and traditions of the region’s various annual agricultural ceremonies and religious festivities throughout the year.

Today’s recording of the week is a jarija work chant, sung during ploughing as part of a Minga ceremony in October 1971. Minga, or Minka, from the Quechua word 'minccacuni' means 'to ask for help promising something in return'. This is a tradition of community work dating back to the Incas. The Minga recorded by Stevenson is the annual maize sowing ceremony held in September and October, to coincide with the rainy season.

The terraced plots on the valley sides are ploughed and sown by a system of reciprocal labour, carried out cooperatively by the landowners. Each owner's plot is ploughed and seeded by his relatives and neighbours. The men plough in groups of three or four, using an Andean foot-plough, called a chakitaklla. The song is intoned by the captain who receives responses from his 'soldiers' [1]. The continuous rhythm of the jarija work chant, along with the chewing of kuka (Quechua for coca leaves) and ‘frequent nips of cane alcohol’ [2] enables the ploughing to carry on at a vigorous pace for several hours.

This excerpt of a jarija, recorded in 1971, is chanted by Faustino Gutiérrez, Justiniano Bautista and accompanying workers:

Meanwhile, women follow the ploughing, breaking up clods of earth with heavy sticks called maqana. They pause from time to time to stand in a group and sing a song called the yarawi into their cupped hands. 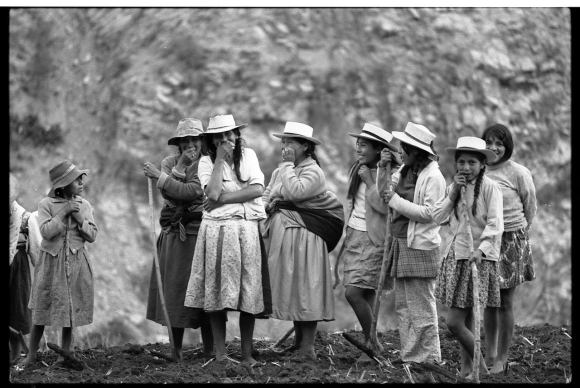 Maize sowing on terraces in Peru. Following the men's ploughing women break up the clods of earth with wooden sticks. Periodically they pause to sing a traditional call and response entreating the fertility of the seeds. © Neil Stevenson

When the ploughing is completed, the workers gather in the corner of a terrace for a maize seed ceremony, during which the women sing the yarawi de semilla (semilla means seed in Spanish). This is followed by a fertility rite, involving the exchanging of flowers. As Stevenson puts it, ‘from this point on there is a general air of licentiousness about the proceedings’ [3]. The men then dig furrows to the rhythm of a slower jarija chant and the women sow the seed.

The work is completed by nightfall and, after further rites, the workers carry the plot owner ‘perched on top of a platform made from crossed foot ploughs’[4] back to his home where they enjoy a large meal of traditional dishes, including one example of each food that the earth provides [5]. After the meal, there is a party involving a singing and dancing competition called the jachua, recordings of which are also in Stevenson’s collection. The songs and joking continue well into the night.

In a letter to the BBC Sound Archive written in 1974, Stevenson indicated that these are rare and ‘probably unique’ recordings of the Minga tradition at this time: ‘the ceremony was previously widely celebrated in this form in Peru but is now found only in a very few places and the complete form, as I have recorded, has not been discovered anywhere else.’ [6]

The ceremony has in fact continued to this day in Santiago de Chocorvos, as this video demonstrates. In this other YouTube video, made by the organisation ‘Quechuata Rimay’, Juan Huachin gives further insight into the tradition. Juan and the interviewer demonstrate a jarija chant at 8 minutes 06 seconds.

Stevenson’s recordings inspired my contribution to the British Library Sound Archive’s NTS radio programme on work songs from around the world. The hour-long selection includes the jarija work chant featured in this post, followed by the equally haunting, yet energetic women’s yarawi song. Like in this modern recording of the ceremony (at 2 minutes 02 seconds), we can hear the men’s jarija in the background whilst the women sing.

Should Dr Neil Stevenson see any of these videos, I can’t help wondering if he might recognise some of the families from fifty years ago. Thank you Neil, for the wonderful recordings, photographs and insights.