Recording of the Week: The musical pillars of a medieval Indian temple

In the British Library's sound archive collections, we have a lot of recordings of temple music – various types of song and music in dedication to any number of religions across the world, performed in a holy space.

Today’s Recording of the Week is temple music with a slight difference –music performed not only in a temple, but also on a temple. 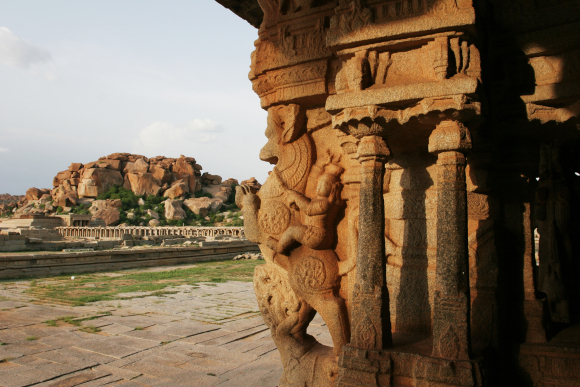 Some of the musical pillars of the Vittala Temple. Photo by Tom Vater’s travel companion Aroon Thaewchatturat.

The Shri Vijaya Vittala Temple sits among the breath-taking and sprawling ruins of the ancient city of Hampi, in Karnataka, India. Dedicated to Vittala, a manifestation of the god Vishnu and his avatar Krishna, the temple began construction sometime in the 15th or 16th centuries but was never finished – the city was destroyed in 1565.

The impressive temple is famous for many reasons, including a giant stone shrine in the shape of a chariot, which is pictured on the ₹50 note. It is also known for its 56 musical pillars.

Each of the temple’s eight main pillars are surrounded by seven smaller pillars. When these small pillars are struck with the hand or a wooden beater, they ring in a clear, bell-like tone. Not only that, but each pillar in a set is tuned to a different note, meaning that together they sound a scale on which music can be performed.

This recording – which can be found in the sound archive's catalogue, was made by Tom Vater in 1995, and it’s one of the clearest and most detailed recording of a ‘performance’ of the Vittala Temple pillars. While most other recordings demonstrate the sound of just one or two pillars, Vater’s captures the sound of several sets of notes, while insects and birds fill the soundscape behind.

The entirety of the ruined city of Hampi is a UNESCO Heritage Site, and in order to protect the temple and its pillars, it is no longer permitted to play the musical pillars. Vater’s recording gives a valuable insight into this fascinating monument of the medieval world as well as being an outstanding and intriguing document in its own right: where temple music meets 'architecturomusicology'!