Written by Val Harding and Julie Begum from the Swadhinata Trust ahead of their British Library event 'Songs of Freedom: Celebrating Fifty Years of Bangladesh' on 16 December 2021.

In 2016 we set up an oral history project at the Swadhinata Trust aiming to document multi-generational experiences of Bengali music in Britain. The Swadhinata Trust is based in East London and is a secular group that works to promote Bengali history and heritage amongst young people. To date we have collected 30 interviews and various musical recordings that are now available to listen to in British Library Reading Rooms as the 'Bengali music and musicians in the UK Collection' (BL REF C1796). 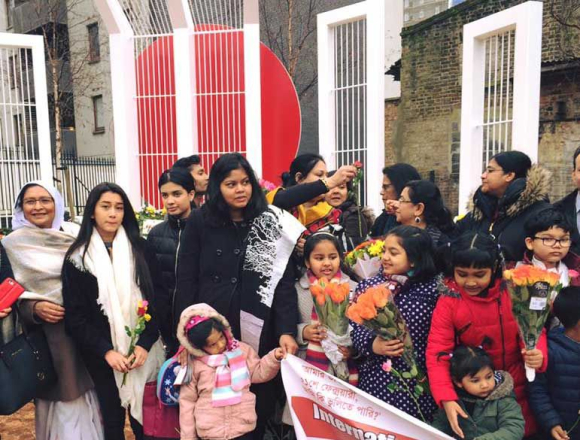 There has been a South Asian presence in Britain for over 400 years, and music has inevitably played a part in this presence. In the first half of the 20th century lascars and seamen from the north east of India who worked for British owned ships and the Merchant Navy began to settle in London’s East End, the Midlands and Northern cities. The Bangladeshi community of today grew from these roots.

In 1971 the nation of Bangladesh was born after a war of liberation from the rule of West Pakistan, and this year, 2021, marks the 50th anniversary of independence. The suppression of Bengali language and culture by West Pakistan was a key trigger in the liberation struggle. The celebration of Bengali language and culture is thus an essential and prominent aspect of Bengali identity in the UK today.

In his interview from our 'Bengali Music and Musicians in the UK' collection, Mahmudur Rahman Benu tells the story of the troupe of artists he led singing liberation songs in 1971. Like many of the interviews in this collection, it is in English and Bengali language and includes many musical demonstrations.

The history of 1971 is again reflected in an interview with singer and songwriter Moushumi Bhowmik who wrote the well known song 'Jessore Road' - inspired by Allen Ginsberg’s 1971 poem 'September on Jessore Road'. Other stories from 1971 come from two sisters, Yasmin Rahman and Rumana Khair, whose parents were activists in London during 1971.  Yasmin and Rumana sang as children at meetings and rallies supporting the war effort. They describe their experience in this excerpt from an interview:

From the mid-1950s through to the 1970s Bengali migrants to the UK faced many barriers. The late 1970s saw the emergence of community activism to fight racism, and with it, a gradual emergence of music that hitherto had been kept hidden behind closed doors. In her interview, Julie Begum explains how her experience of music started when she was a teenager in London, living in Tower Hamlets in the late 80s and early 90s. She describes how her and her Bengali friends were part of the community around the 'Asian underground sound', going to raves in warehouses where artists such as brothers Farook and Haroon Shamsher began to DJ as 'Joi'.

Since then, there has been a prolific growth of music making. Our interviews document migration and musical development in the UK, annual cultural events such as the Boishaki Mela (Spring Festival), music history from Bangladesh and West Bengal, theatre, and the music of the younger generations in the UK and in Bangladesh itself.

These areas are illustrated across various interviews in the collection. An interview with Mukul Ahmed, director of the theatre group Mukul and the Ghetto Tigers, demonstrates the integration of Bengali music and song into theatre. Present-day interest and innovation from the younger generation is illustrated in the interview with a ten-year-old performer, Anvita Gupta. The sound artist Abdul Shohid Jalil talks about his composition of Bengali inspired electronic music. The history of music in Bengal itself is also reflected in the interview with sarod player Somjit Dasgupta.

Bengali music is a broad term that encompasses musical practices in both Bangladesh and West Bengal in India. Before partition in 1947 this was one region, Bengal, sharing the same language, culture and music. The music of this region includes classical, folk and modern traditions, and notable composers of songs such as Rabindranath Tagore and Kobi Nazrul Islam. Our interviews include those who learn and perform these genres, and even present-day songwriters and composers, and the younger generation who are producing a fusion of music that reflects their Bengali and British backgrounds.

Our aim is to document music in the community and the culture that surrounds music. Our interviews are with community members and community music schools. The more professional and well-known musicians that we have interviewed are musicians working with the community, running classes and teaching, and involved in everyday community music making, such as Himangshu Goswami, Mahmudur Rahman Benubhai, tabla player Yousuf Ali Khan, singer Alaur Rahman, and teachers at the Udichi School of Performing Arts. Some of our interviewees are also people from other South Asian and non-Bengali backgrounds who participate and enjoy Bengali music.

Amongst those interviewed who migrated to this country, either as children or adults, there is often an expression of the hardship of psychological adjustment to living in the UK. For some who were practicing musicians or students of music back in Bangladesh and or India there was a period of time on arrival here when they could not find their voice and found themselves unable to express themselves through singing or music in the way they did back home. The process of overcoming this has been gradual, and only achieved through the encouragement of friends and family. These processes are succinctly expressed in interviews with Alaur Rahman, Moushumi Bhowmik and Nadia Wahhab.

We hope you will enjoy the interviews in the 'Bengali Music and Musicians in the UK' collection both at the British Library and also at the Swadhinata Trust. Please get in touch as we are always happy to hear from you regarding any aspect of our project.