This Disability History Month, staff from across the British Library have collaborated on a series of blog posts to highlight stories of disability and disabled people in the Library’s collections. Each week a curator will showcase an item from the collections and present it alongside commentary from a member of the British Library’s Disability Support Network. These selections are a snapshot insight into the Library’s holdings of disability stories, and we invite readers to use these as a starting point to explore the collections further and share your findings with us.

Dr Madeline White, Oral History Curator, has selected this fascinating self-recorded memoir by Geoff Webb. These recordings tell the story of one man’s experience of the polio epidemics of the twentieth century. Polio is the colloquial name for poliomyelitis, an infectious disease that at its most severe can cause spinal and respiratory paralysis. In the late 1800s the disease began to spread across the world, leading to frequent outbreaks and global epidemics which persisted until the development and widespread distribution of effective vaccines in the late 1950s and 1960s. Some people – like Geoff Webb – experienced life-changing impairments as a result of contracting the disease. 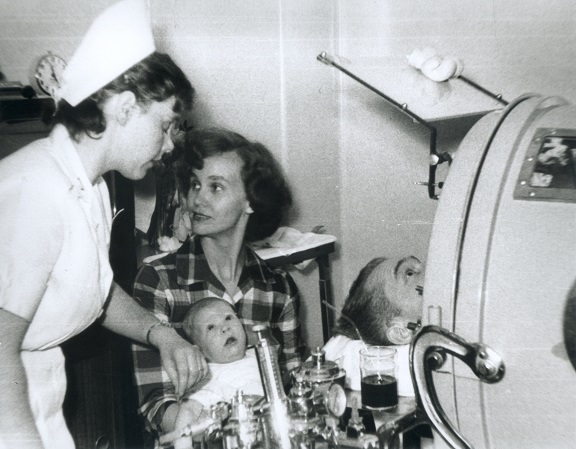 Polio patient in iron lung, courtesy of National Museum of Health and Medicine/Wikimedia

Geoff Webb was born in 1927 in Peshawar on the northwest frontier of India. His father was in the Indian army so he spent his early years moving between India and England with his parents, until starting boarding school in England in 1934. His self-recorded reminiscences – recorded in the 1970s and deposited at the British Library in 2009 – preserve a detailed life history, the story of a life which (in his own words) would be ‘distinguished only by its ordinariness’, were it not for the virulent polio infection he contracted in 1959 at the age of 32.

For a man who had rarely been ill, the infection came as a shock. He recalls his doctor telling him he would need to spend a few days in hospital and remembers being carried from his home to an awaiting ambulance. Several weeks later he woke up, paralysed, eyelids sewn down, unable to talk or to breathe independently. He remained that way for several months. In the following extract, he describes the slow pace of his recovery:

Geoff remained on a mechanical ventilator for the rest of his life. You can hear the regular movement of the ventilator in the background of the audio and his speech remains controlled by its movements, so he delivers his reminiscences in the same four-words-at-a-time rhythm that he describes in the extract. In this way, the audio is a rich, dynamic record of polio-induced disability – it is not just what he says but how he says it that gives us an insight into his lived experience.

These reminiscences are a very real, very honest account of the realities of living with permanent disability, but – perhaps contrary to how Geoff himself perceived his reminiscences – they are more than just a technical record of symptoms, therapies, and physical and legislative challenges. They are also powerfully human. His account demonstrates one of the key strengths of the life history recording, displaying the moments of reflection that occur when people consider their experiences in the context of their whole lives. Here, he reflects on how for him finding humour in the everyday was the key to finding meaning in life:

One of the chosen themes of UK Disability History Month 2021 is ‘Relationships and Sex’, which is a topic on which Geoff Webb reflects in his reminiscences. Throughout the six hours of his recordings, Geoff places a powerful emphasis on his various relationships – including many platonic relationships as well as romantic and sexual ones – exploring how those interactions were both defined by his disability and in turn shaped his identity as a disabled person.

He talks about his wife and negotiating his relationship with her as they both reckoned with a future that neither of them had anticipated, and his children, who were born before he contracted polio. He discusses his parents, his friends and his carers and the roles each of these people played – or ceased to play – in his life before, during and after his hospitalisation. He describes the people he met through his disability activism, which involved rallies, petitions, visits to Westminster, and writing articles and contributions to the publication The Responaut, a magazine for people dependent on mechanical breathing aids. He also references the women who enabled him to have fulfilling sexual encounters following the dissolution of his marriage.

And then there is Annie. The following extract concludes his reminiscences and needs very little commentary: it is an emotive description of love, companionship and the power of human connection.

DSN member Barbara, provide us with her thoughts that were provoked by Geoff’s story and hearing him speak about his life with Polio:

Geoff astonishes me. Not his circumstance, but him. The charisma, the insightfulness. No wonder Annie fell for him. She didn’t stand a chance.
Listening to Geoff speak made memories form (or misinform) thanks to Hollywood - the iron lung, the plucky cripple. Outside my local chippy, a plaster statue of a sad eyed boy in callipers, holding aloft his collecting box. The prophylactic sugar cube.

Contemporary parallels: Post-polio syndrome, often presenting years later; symptoms such as fatigue, joint pain, brain fog. The eradication of polio in richer countries by the 1960s, yet it still ripped through poorer regions two decades later and can, even today, be found in small pockets. All this despite the availability of a cheap, easily administered vaccine. Sound familiar?

Analogies between polio and the Cold War. There are allusions to fighting the 'unseen enemy', the 'enemy within'. Who’s the Knight in the shining wheelchair? Why it’s a polio-paralysed Roosevelt, leading the free world, indomitable, in the face of all evil, Nazi, Soviet, viral.

FDR’s prominence, the frustrations of injured veterans and a population recently touched by epidemic seem to have coalesced opinion and change, albeit slow. No coincidence, I think, that the Design for All and the Disability Rights movements gained momentum at this time

Most of all, I am haunted by Geoff and his miracle drug, redemptive love. He refers to Annie as the 'bomb-shell' arriving (more conflict metaphors). I chuckled. I cried. I imagined a sexy Shirley Eaton á la Carry on Nurse sashaying into his life. His words 'From that day onwards, it was no longer Geoffrey, the independent cripple, but it was to be Annie and Geoffrey and their exploits, inseparable from one another'.

Posted by Charlie Morgan at 9:09 AM