In October this year many of us at the British Library were distressed to hear of the death of Ian Rawes. Best known to the wider world for his field recording project London Sound Survey, Ian once worked at the Library. He was here for a period of 13 years, leaving in 2014.

In earlier times, when some of us were based in the British Library building in Micawber Street, Ian worked as a Sound Archive Vaultkeeper. He was unfailingly hard-working and helpful to all. A great loss.

After he left, Ian returned as a researcher, working in the Reading Rooms on projects such as his 2016 book of 'forgotten sound-words' Honk, Conk and Squacket. Ian was well-liked among his former colleagues and would often join some of us for a pint in the Boot or the Skinners Arms on a Friday night, after work had finished and the Reading Rooms had closed.

The London Sound Survey is a web resource presenting over 2,000 recordings of everyday life in London and beyond. Most were made by Ian between 2008 and 2020. Some guest recordists are also featured, including Richard Beard, with a selection of his Hackney wildlife recordings. The site also includes many related articles on the theme of urban sound.

Ian used a variety of techniques to make his recordings. I recall him demonstrating his headworn binaural microphones. To the casual observer, these looked much like headphones, and didn't attract public attention. These were used to make stereo recordings in many different urban environments. Here is one from 2010, made at an anti-capitalist protest encampment by St Paul's Cathedral. And here is another, featuring the gentlemen who stand outside the restaurants in Brick Lane trying to drum up custom.

Discretion was advisable in certain settings, but other kinds of recordings, such as these environmental recordings made along the Kent and Essex sides of the Thames Estuary used a more traditional field recording approach. The now-disappeared sound of the Coryton Oil Refinery siren served as a moment of reflection during Ian's memorial service.

Some highlights from the collection - among them the memorably titled 'Cigarette Ponce' - were issued on vinyl on the Vitelli label under the title 'These Are the Good Times'. The collection itself is archived permanently at London Metropolitan Archives.

Ian's second published LP Thames was issued by the Persistence of Sound label. This contained a mixture of industrial and environmental recordings, from the inner workings of Tower Bridge to the sounds of the Essex shore. There are plans for the label to release some of Ian's last recordings on a new LP in 2022.

Online tributes to Ian included a very well-informed piece by Tony Herrington in The Wire and another from Susannah Butter in the Evening Standard, and there were many comments on both public and professional forums from those who had worked with Ian and/or known him personally. All testified to his generous, affable nature and healthy sense of humour. Ian was great company and was never in the slightest pompous or pretentious about his work. He will be very much missed. 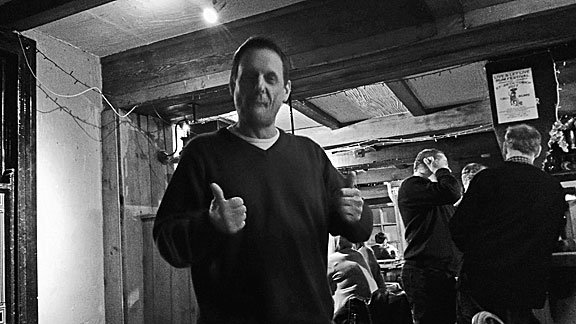