Recording of the week: Recollections from a political activist

The British Library recently launched its new website Speaking Out, an online learning resource exploring the power of public speaking, protest and debate through its sound archive.

Featured in Speaking Out, is an interview with Lou Kenton (1908 – 2012), captured by Louise Brodie and Roy Gore as part of the Labour Oral History Project. Kenton was a big player in the campaign to suppress fascism and anti-Semitism in interwar Britain. As someone who knew little about the British anti-fascism movement in the 1930s, I found it fascinating to listen to Kenton’s recollection of events, and learn about his rich and intriguing life of political activism.

In the 1930s, British fascism had a short-lived rise that mirrored that of Nazi Germany, but lost momentum and died out at the beginning of the Second World War. The fascist movement was ushered in by Oswald Mosly, a Conservative-then-Labour MP who, taking inspiration from Hitler and Mussolini, formed the British Union of Fascists (BUF) in 1932. The party similarly adopted virulent anti-Semitism and exploited widespread unemployment and poverty to gain traction. Its uniformed paramilitary group, the Blackshirts, brought violence and intimidation to the BUF rallies often in held in London’s Jewish neighbourhoods.

Lou Kenton, born in Stepney to Ukrainian Jewish parents, left school at 14 to work in a paper factory, where he experienced such anti-Semitism first hand. This led him to join the Communist Party in 1929. As a printer, he also galvanised his trade union in anti-fascist work. As far-right sentiment grew, Kenton participated in two major events that helped to stifle the rise of the BUF. In the clip below Kenton talks about an attempt to disrupt a rally at the Kensington Olympia in June 1934. The Blackshirts responded to hecklers brutally, but they received a torrent of negative press as a result.

Lou Kenton on the BUF rally at Kensington Olympia 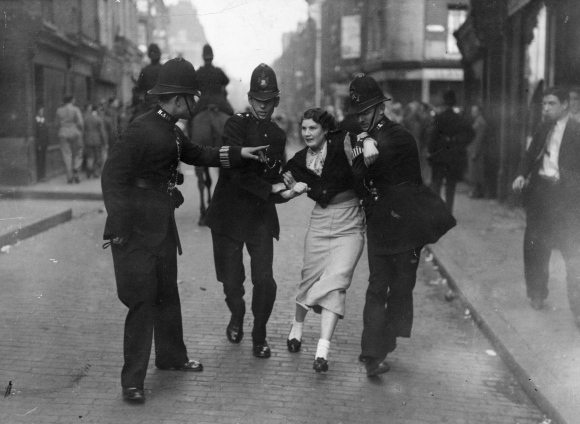 On 4 October 1936, Mosly had planned a march in the East End of London, an area with a distinct Jewish community. This led to the Battle of Cable Street, in which 6000 Metropolitan Police officers worked to clear a path for the BUF’s march of some 3000 people – but thousands of anti-fascists and local people outnumbered them and successfully blocked their route. Kenton was one of the people behind organising this, and during the event, he sped on his motorcycle to relay police movements to the crowds.

Mosley called the march off, and the Public Order Act of 1937 was passed, which banned the wearing of political uniforms in public. The British Government finally banned the BUF in 1940.

Kenton continued to be a remarkably dedicated campaigner and activist for the rest of his life. In 1937, he rode his motorcycle to Spain during the civil war and joined the International Brigades (IB) as an ambulance driver on the front lines; in 2009, he was awarded Spanish citizenship for his contribution. Following the brutal Nazi massacre of the village of Lidice, Kenton joined the ‘Lidice Shall Live’ campaign and served as its chairman.

After the Second World War, he helped organise the Homes for Heroes campaign, which helped homeless veterans and their families take residence in unoccupied properties. He worked for the communist party until the Soviet Union invaded Czechoslovakia in 1968, after which he was a member of the Labour party for the rest of his life. He worked for the Financial Times as a proofreader into his 70s, but even well into retirement, Kenton supported his causes, creating commemorative pottery for trade unions.

Speaking Out has been delivered as part of Unlocking Our Sound Heritage, a UK-wide project supported by the National Lottery Heritage Fund, that will help save the nation’s sounds and open them up to everyone.