Recording of the week: A new year song from Vanuatu

In early 1924, just before leaving the island of Efate due to ill health, the Presbyterian missionary Eric Raff used a phonograph to record around 30 songs on wax cylinders. The performers of these songs came from villages around Port Vila on Efate, the capital of what was then the Anglo-French Condominium of the New Hebrides, now the Republic of Vanuatu. 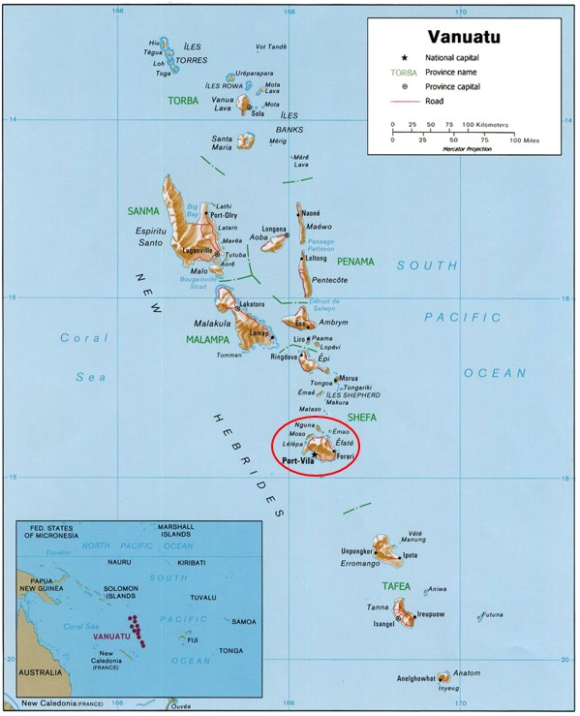 These twelve cylinders, now digitised, form the Eric Raff 1924 Efate, New Hebrides Cylinder Collection (C83) at the British Library Sound Archive. The collection is being researched as part of the True Echoes project. Fieldworkers from the Vanuatu Cultural Centre/Vanuatu Kaljorel Senta, a project partner, have recently started to take the recordings back to the communities from which they originate.

The second track of cylinder C83/1502 was described as a New Year song, sung by Tavero and Leiboni from Meli, and Turi from Leleppa.

Eric Raff’s widow, Ruth, typed up the translations and transcriptions of the recordings shortly after her husband’s death in 1927. The relevant section for this song includes a translation by Nganga, who was probably a Mele chief at that time: 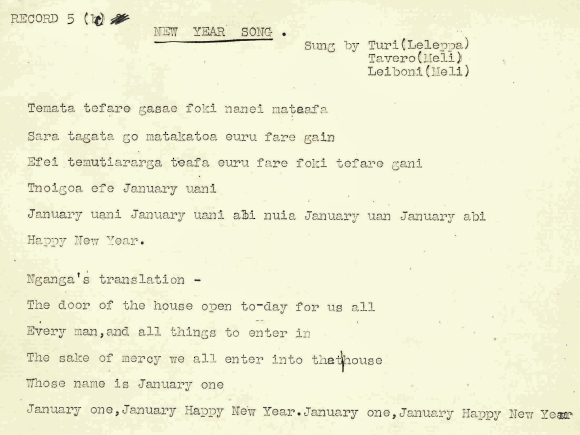 A typed transcription and translation of 'New Year Song' produced by Ruth Raff and held at the British Library Sound Archive (cropped).

In 1924, 'Meli' referred to the small offshore island of Mele in Mele Bay. In 1950, the government of the New Hebrides ordered the population of Mele Island to relocate to the mainland; today, Mele, or Imere, is a large village a few miles north-west of Port Vila. Around 2000 people speak the Mele language, which is of Polynesian origin. Leleppa, or Lelepa, is an island off the northwest coast of Efate. Ambong Thompson, Manager of the National Film, Sound and Photo Unit at the Vanuatu Cultural Centre, spoke to Jimmy Lulu Subuso, the fieldworker at Mele village, to ask him about this New Year song. Ambong shared the following via email on 7th December 2021:

Jimmy Lulu Subuso […] confirmed that the singers on C83/1502 were from Mele village. The two singers were Leiboni Sael Taravaki and Tavero Sarapera whose generations are still living today at Mele village. The people of Mele were excited to hear the old voices and Jimmy told me this morning that they are working on recording the same song with more people taking part in the singing. The people of Mele are very well known for singing old and new songs celebrating the new year. They can sing for whole night till dawn. Between Christmas and New Year they can also visit surrounding villages on Efate including some parts of Port Vila capital with their singing and at the same time welcoming new year 2022. 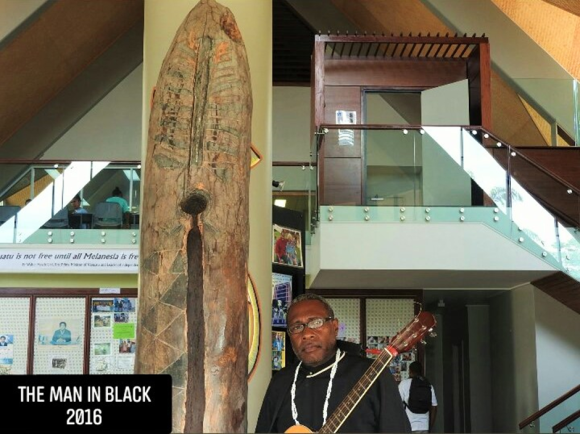 The song is interesting for many reasons. It shows how concepts introduced through colonial government and Christian churches, such as the Gregorian calendar and the New Year, were celebrated in local languages and local music styles. We do not know exactly when the people of Mele started their tradition of singing in the New Year like this, but it may have been well-established by 1924. To welcome in 2022, we are proud to share with you, 98 years after it was recorded, the song sung by Tavero, Leiboni, and Turi.We thank Ambong, Jimmy Lulu, and the villagers of Mele for their support in producing this recording of the week.

True Echoes – funded by the Leverhulme Trust and BEIS – is a three-year research project centred on the British Library’s collection of Oceanic wax cylinders. These cylinders were recorded between 1898 and 1924 in the Torres Strait Islands (Australia), Papua New Guinea, Solomon Islands, Vanuatu, and New Caledonia. True Echoes is working with national cultural institutions in Australia and the Pacific to increase the visibility and accessibility of the collections and reconnect the digitised sound recordings with the communities from which they originate.