Recording of the week: A personal jazz mystery solved 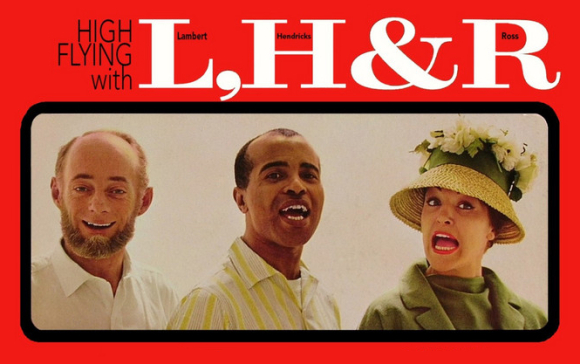 I’m a jazz nut. My mental soundtrack is often filled with anonymous changes and walking bass solos. But there is one particular song that has been buzzing around my head for years and years – about a decade, in fact. That song is the version of ‘Popity Pop’, recorded by vocalese trio Lambert, Hendricks and Ross, on their album High Flying from 1961. Specifically, Jon Hendricks’ break-down at about 2 min. 16 sec.:

That break-down is so unexpected, so sweet and so touching; it’s an inspired moment and a great contrast to the frenetic energy of the rest of the song. I couldn’t help but become intrigued by it. It was obviously a quotation from another piece of music… but which one? I had no idea. I asked around, and no-one else seemed to have an idea either. Google was no help. I was certain that the answer must be out there. Where was it?

I searched on-and-off for years trying to find the source of that short snippet of tune, but to no avail. That was a long time ago, now, and I eventually gave up the chase and assumed that this would stay just out of my reach forever. Not that that stopped the tune from being permanently wedged in my head, floating into my mind’s ear every couple of weeks. I couldn’t let it go that much.

About my day job: I’m a World and Traditional Music cataloguer at the British Library, and as such, I get to listen to all sorts of wonderful recordings from all over the world, near and far. In December, I was cataloguing the Vic Ellis Collection of English accordion music, and I came across a tape of Tommy Beadle, a concertina player from Middleton-in-Teesdale, County Durham. I made my way through the 1977 recordings of English and Scottish dance tunes, and about half-way through the tape, I heard this:

Those first notes! Unmistakable, even after one or two seconds: I’d found it! I found the tune! I literally stood up from my desk and cheered in excitement and a decade’s worth of relief. On C1128/1 C11 was a recording of the tune that Beadle called ‘Fairy Dell’ and played with all the charm of those English village dance tunes. But (as the recordist was helpful enough to note in his documentation), it’s better known as ‘When You and I Were Young, Maggie’, an American song written by George W. Johnson and James Austin Butterfield in 1864. It turns out that the song had a vogue on both sides of the Atlantic, and even made its way into some jazz repertoires (including those of Sidney Bechet, Fats Waller and Benny Goodman) before trickling down into the consciousness of Jon Hendricks and making its way into that beautiful cameo role in Lambert, Hendricks and Ross’s ‘Popity Pop’.

How amazing to realise the line of tradition that connects renowned jazzman Hendricks and Durham County Council road worker Beadle – and what a thrill to find that the key to unlocking my decade-long jazz mystery was hiding in the bellows of an English folk concertina in Middleton-in-Teesdale.

A special thanks to Lesley Grey and family, Vic Ellis and Mark Davies for allowing me to use Tommy Beadle’s recording in this blog.