Recording of the Week: Filling in the gaps of the feminist movement in the 1980s – Southall Black Sisters

This Recording of the Week for International Women’s Day looks at the work of Southall Black Sisters activist and case worker Pragna Patel. 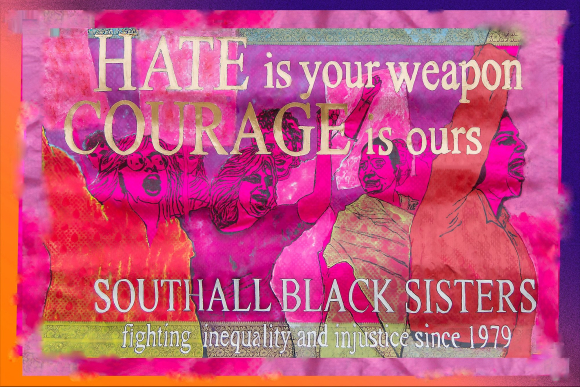 Southall Black Sisters (SBS) formed in 1979 and is a campaigning group that was established by women from African, Caribbean, South Asian and other minority backgrounds in West London. Faced with the onslaught of violence and marches by members of The National Front in Southall, the organisation formed as an anti-racist campaign group, influenced by the Black Power groups in the US and UK. As a result, they used ‘Black’ as an umbrella political term for all minorities, ‘born out of common experiences of colonialism and imperialism’.1 SBS addressed both the gap within the wider feminist movement concerning race and the neglect of gender in anti-racist movements. A Black feminist space gave women an environment to articulate their concerns with gender-based violence in the context of their racial identities. It emerged at a pivotal moment, with the important rise of feminist consciousness from 1979. Through active organisation, including conferences and the establishment of activist groups, British society was made to hear women’s demands.

Pragna Patel was interviewed by Rachel Cohen for Sisterhood and After: the Women's Liberation Oral History Project. The interview Patel gave encouraged internal discussions about the place of SBS within the wider feminist and anti-racist movements. Patel raised important questions of how the SBS dealt with the difficulties of confronting issues of domestic violence within minority communities, whilst avoiding wider racial stereotyping. Women of Black, Asian and Minority Ethnic backgrounds are, statistically, disproportionately affected by domestic abuse, and Patel’s work sought to address why there was a gap in support for Black and Asian women in cases of gender-based violence.

Patel joined SBS in 1982, at a point where the group had lost steam, but also at a time when concerns of addressing domestic violence had increased due to cuts in support and welfare services.2 In an interview with Granada TV in January 1978, soon after she became Prime Minister, Margaret Thatcher asserted that the population were fearful of being ‘swamped by people of a different culture’.3 Thatcher presented foreign cultures as an ‘alien’ threat to the British way of life, in rhetoric that one can argue further fuelled racial stereotyping of minority communities.4

In this clip, Patel explains how SBS emerged at a time when Black feminists were seeking to assert their identity in the activist space by discussing issues such as Black female sexuality and domestic violence. At the time, despite a growing anti-racist movement and the rise of feminist consciousness, few organisations focused on the specific challenges faced by Black and Minority Ethnic women at the intersection of those two identities.

Patel discusses the first meetings of the Organisation for Women of Asian and African Descent (OWAAD) and the Brixton Black Women’s Group. Most of the literature focusing on South Asian feminist activism has looked at 'two streams of South Asian political organising in Britain'. One, class solidarities in trade union mobilisation in the face of increasing privatisation; and the other, the anti-racist mobilisation of the Asian Youth Movements (AYM). These relationships have been mainly focused on male-dominated organisations, where the cultures were 'distinctly patriarchal'.5 SBS created a safe space for women to address the issues within their community and criticised the wider state’s handling of gender-based violence. In Britain in this period ‘it was the black women that helped keep the names’ of women suffering deportation threats within the public consciousness. Patel’s interview brings in the legacy and continuing ‘living history’ of British imperialism, cemented further by hostile anti-immigration policies. SBS and OWAAD looked to battle hostile immigration policies, challenged the targeted use of the dangerous contraceptive Depo-Provera for minority communities and established trade union solidarity in a period of rising women’s employment. SBS, alongside the organisation AWAZ (‘Voice’ in Urdu), also played a major role in protesting against the virginity testing at Heathrow airport and the ‘X-raying of immigrants’.6 SBS enacted effective campaigns to challenge government policies; in 1992 they gave evidence to the Home Affairs Select Committee’s inquiry into the one-year rule in immigration, showing how it could trap newly married women in violent relationships.7

Confronting the visceral effects of racist polices on Black and Asian women immigrants, these organisations implemented important grassroots campaigns to support their communities. In breaking the silence on domestic violence in Asian Communities, the public campaigns of SBS showed the faults in the systems that let vulnerable women slip through the cracks.

You can listen to more clips from Pragna Patel's interview and oral history interviews with other feminist activists in our two digital resources, Sisterhood and After and Women's Rights.

Posted by Madeline White at 4:00 PM