Recording of the week: Sharing Somali sounds and stories

As Learning and Engagement Coordinator for the British Library’s Unlocking Our Sound Heritage programme, a highlight of my role has been working in partnership with Camden Somali Cultural Centre to develop a listening project. Weekly listening sessions showed the capacity of recorded sound to make connections, bringing listeners in contact with different times and places, as well as connecting those who share the experience of listening together. Ubah Egal, director of Camden Somali Cultural Centre, explained the significance of Somali sound recordings in the British Library’s World and Traditional Music collections, saying 'Camden Somali Cultural Centre wants to re-engage the community with our oral tradition of sharing stories. The collection at the British Library represents a beautiful selection of recordings capturing our oral tradition from many generations of Somalis.'

Poet and storyteller Elmi Ali selected recordings of song and poetry for the group to listen to, which elicited discussion, reminiscence, laughter and a sharing of cultural pride during the sessions. Of particular interest to participants were recordings from the John Low collection, made in Somalia in the mid-1980s during Low’s time as a development worker in the Lower Shabeelle region. On 12 November 1984, Low sent a postcard from Somalia to the British Institute of Recorded Sound (now the British Library Sound Archive). He wrote that 'songs, poems, work songs abound' and set about making recordings representing a diverse cross section of musical styles and practices. Several decades later, following Somalia’s civil war and the disruption and displacement it caused, Somali listeners in London engaged with these songs and poems, which stimulated memories of cultural heritage and former times, places and people.

During the listening sessions, artist and poet Sophie Herxheimer drew and painted, reflecting the words and stories shared by the group. Sophie’s drawings portray recollections of nomadic life evoked by recordings such as this house building song performed by a group of women and recorded by Low:

This song stimulated discussion about the role of women in nomadic culture and how women were responsible for building nomadic houses, with one participant commenting that this song made her think of her mum. At the end of the project she said: 'this has brought back so many memories.' 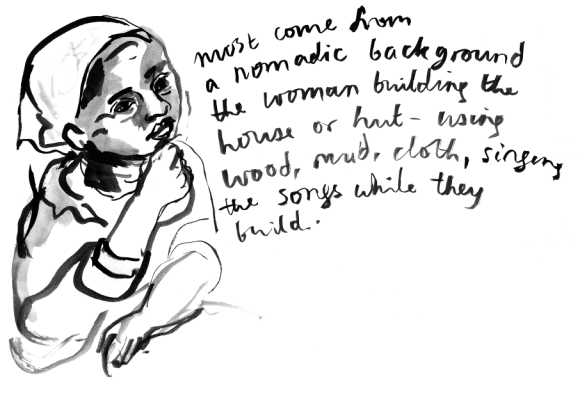 Participants were very moved by lullabies from the collection, such as this one performed by Faadumo Cabdi Maxamed:

Hearing recordings such as this prompted memories of other lullabies, such as a fondly remembered lullaby that a participant sang to the group, a moment that was captured by Sophie in this drawing: 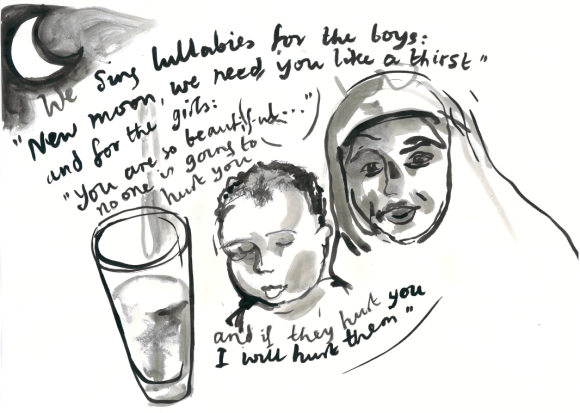 Low also recorded camel songs, including this watering song for camels at the Shabeelle river, sung by Geedi Maxamed Cali and a male chorus:

Listening to this evoked much laughter as a participant recounted memories of being a city girl visiting the countryside and running away in fright from various animals – foxes on one occasion and a baby camel on another! 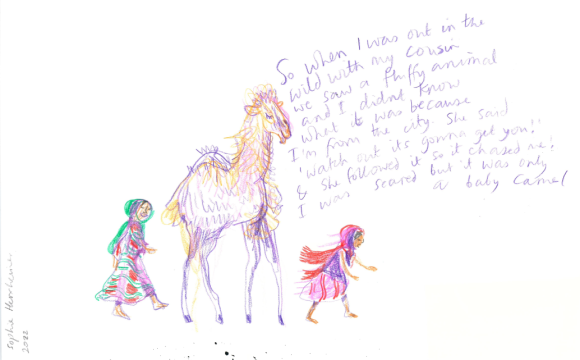 One member of the group described the listening sessions as providing 'an opportunity for us to get to know each other in a different way, tell these stories to each other that we never speak about.' Ubah Egal reflected on the project as 'a wonderful moment capturing the reactions and impact the recordings had on our community and participants.' This small selection of recordings demonstrates the potential for sound heritage to unlock memories, connect listeners, and make a deeply personal impact.

The Somali listening sessions took place as part of Unlocking Our Sound Heritage, a major project funded by the National Lottery Heritage Fund which aims to preserve and provide access to thousands of the UK's rare and unique sound recordings.

With thanks to John Low for allowing us to use the sound clips, Sophie Herxheimer for permission to post her artwork, Elmi Ali for selecting recordings, and to Ubah Egal and members of Camden Somali Cultural Centre for allowing us to include their comments and stories in this blog. 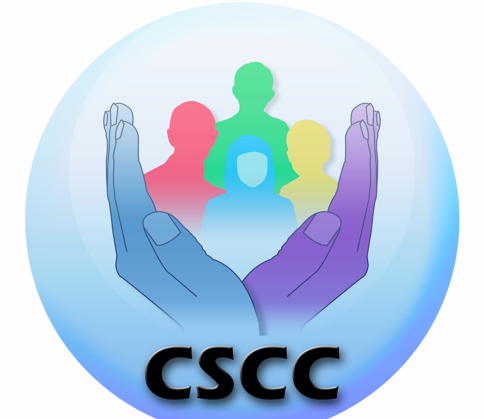