Yee I-Lann is one of the British Library’s Resonations artists-in-residence. She lives and works in her hometown Kota Kinabalu, capital of the Malaysian Borneo state of Sabah. Her practice engages with regional Southeast Asian history, addressing issues of colonialism, power, and the impact of historical memory in lived social experience. Yee I-Lann was one of the featured artists in this summer’s Unlimited. This was Art Basel’s section for large scale projects. She presented her work TIKAR/MEJA, 2020 which was created in collaboration with women weavers in her homeland. In this blog, she gives us some insight into the start of her online residency at the British Library:

Perhaps Mr Michael Saville wanted me to find his story buried in the British Empire & Commonwealth Collection at the Bristol Archives. I was looking for stories and sounds on the British Library Sound and Moving Image catalogue and entered ‘North Borneo’, where I am from, into the search box. An interview with him landed first on my screen. In the summary of the interview, I read: ‘He describes the nationalism movement [in Malaysia] and his involvement in it, and he expresses various doubts.’

So I chose this audio file as my first request for the Resonations residency I am part of. I chose it because the recording’s summary contained the word ‘doubt’. ‘Doubt’ seemed a good place to start a conversation.

Mr Saville, his wife and two children arrived in my home town Jesselton, North Borneo in April 1949. The name has since changed to Kota Kinabalu, capital of the Malaysian Borneo state of Sabah.

A young Mr Saville, with his education in finance, had come to join the administration. He would work for the secretariat, become a District Officer, and hold the office of Controller of Supplies, dealing specifically with rice. 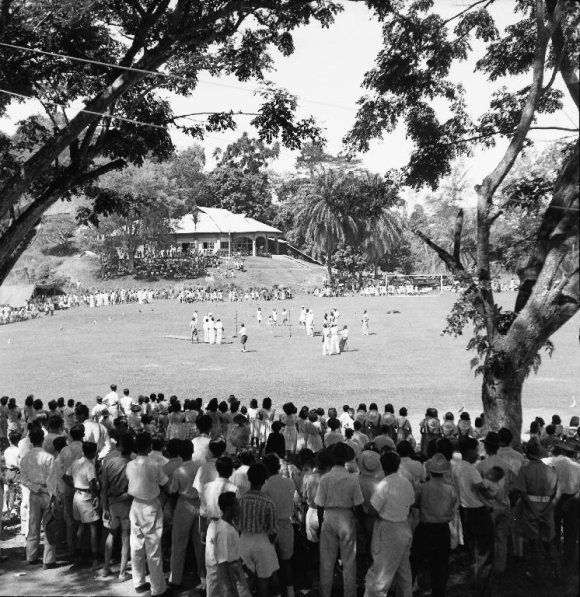 When I first listened to ‘Interview with Michael Saville (1999-04-13)’ - British Library shelfmark: UBC034/700 - I thought, oh, that’s quite benign. The sound of his voice was familiar to me. In 1963, as the British exited North Borneo, it joined the Federation of Malaya, as Sabah, to form Malaysia. Mr Saville left Sabah in 1964. I was born seven years later. I grew up hearing what I’ve come to think of as a British paternalistic tone: earnest, sympathetic at times; defensive at others, with swallowed breath at the racier moments.

Of the colonial administration and his role within it he says:

Whether we did a good job or not I don't know. We can't be like the Irishman who says, when being asked the way, ‘Well, if I were you I wouldn't start from here’. We started from here. It was one piece of cloth and one was part of the weaving process.

Mr Saville also sounds like he loved my home, or at least enjoyed his time there. I transcribe the interview. Start, stop, rewind, play. What was that? Stop, rewind, play. I hear his intonation and pauses, I hear the doubt and nostalgia that must occupy him and old chaps from the administration like him, swept away as they must’ve been in their youth by the currents of their unquestioned times.

I must not be cynical, I say to myself that is not useful. I must listen to the gaps, hear the rehearsed speech, and hear the guilt and pleasure and joy beneath this tone of ‘one must be loyal to the office’.

I must listen to the rhythms of this voice just as I want to answer back with the rhythm of my own experiences, powered by a hunger to better understand. In many of our native and local communities here in Sabah, our history is told through oral storytelling, and I have belief and loyalty to the power of that.

Mr Saville ends his interview with a tone of regret directed towards his wife and two older children:

I think going out there was incredibly selfish… I enjoyed myself immensely but it was my life and my career, and the people who suffered from it were my two older children.

Perhaps this is my favourite part of the interview because he allowed himself to be vulnerable, to allude to other people’s trauma. I am reminded, as I sit here amongst threads and threads of that ‘one piece of cloth’ to untangle, that his people too were impacted by our shared histories. Perhaps we all need to start again from here, where we each are now, and re-weave anew.