Recording of the week: Women’s work on the record 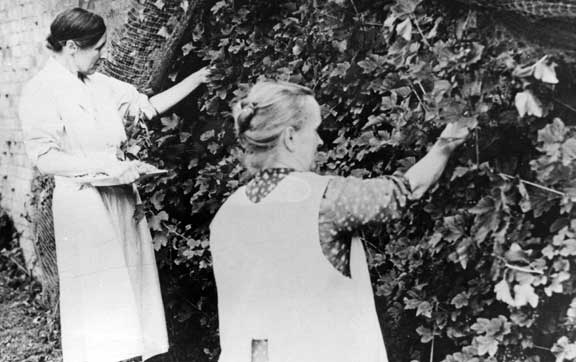 One of the many joys of oral history is learning about unexpected topics. Whether recording an interview or discovering another interviewer’s work, oral history - and especially life story recordings - is full of information that we would not suspect if we were to only read the catalogue records and summaries.

In the last few months, I have worked on three collections of interview cassettes that were preserved by the Unlocking Our Sound Heritage project. These are An Oral History of British Horticulture (British Library ref. C1029), An Oral History of the Post Office (C1007) and the Hall-Carpenter Oral History Archive (C456). Most of the interviews are several hours long, sometimes up to 13 hours. Unsurprisingly, they cover much more than the topics of horticulture, the Post Office, or gay and lesbian experience in the United Kingdom. Some of the transversal themes are fascinating to observe, and one of them is women’s work in the mid-20th century, across social classes and geographical areas.

A large part of my work as an UOSH Rights Officer is to review newly digitised and catalogued sound recordings before deciding whether they are suitable for online open access. When it comes to oral history recordings, conducting a sensitivity review requires paying attention to the interviewee’s family members, key life events and relationships. Each time, I am reminded of the wealth of sociological and historical information that is usually captured in the first hour of most interviews, which often depicts the origins of two parents and four grandparents, as well as their occupations and roles inside and outside the home.

Listening to these recordings shines a light on the power of sound archives, and on the limits of their written description. The four extracts below show the importance of diving into the audio version of any interview, to go beyond the misleading categories that are inevitably created by cataloguing and summarising. This includes the simplistic, and often wrong, category of 'housewife' used to describe an interviewee’s mother. Often the interview summary also hides the many paid and unpaid occupations that many women had in the 20th century. These jobs are revealed when oral history narrators talk about their mothers, aunts, grandmothers and themselves. Although my selection is only of female narrators, the shift in women’s and men’s roles is also described through these personal accounts, as can be heard in the last extract.

My selection starts with Pamela Schwerdt, who was co-interviewed for the Oral History of British Horticulture project in 2002. She was born in Esher, Surrey in 1931. Her father was a naval officer and her mother’s occupation is described as 'none given' in our catalogue. Yet, the first part of the interview unveils a busy trio of women who, between themselves, set up and chaired for a century the National Wildlife Society. Its success culminated in Pamela’s mother receiving a CBE in 1986 for her work as President of this Society.

In this clip Pamela talks about the three Presidents of the National Wildlife Society. The British Library ref. is C1029/08.

In the same oral history collection dedicated to horticulture, Peggy Cole described in 2003 the many paid jobs that her mother had in the 1940s and 1950s. Despite being catalogued as a 'housewife', her mother worked as a hospital cleaner, a woodcutter and fruit picker. In this extract, Peggy, who was born in 1935, recounts how her mother worked after the birth of her last son in 1950 as one of a hundred other female seasonal workers near Easton, Suffolk. The British Library ref. is C1029/11.

In the third extract, we hear about Gladys Hillier who worked as one of the few postwomen in the 1940s in Gloucester, where she was born in 1917. In the interview that she gave in 2002 as part of the Oral History of the Post Office project, she described how she went from working in an aircraft factory during World War II, to delivering the mail in 1947 until her retirement in 1982. The British Library ref. is c1007/57.

Women’s new paid professional activities during World War 2 are discussed in our fourth interview. Jackie Forster, who was born in 1926 in London, reflected on the impact this social change had within her own family. In an interview for the Hall-Carpenter Oral History Archive, she explained how her mother worked as an ambulance driver during the war and started making money in the Stock Exchange to support her two children. Jackie’s mother became the breadwinner after her husband, who was an army doctor posted in India, was declared missing in 1939. In this extract, Jackie describes the new family roles and dynamic, and how these had to be accepted by her father, who eventually returned to England in 1945. The British Library ref. is C456/87.