Recording of the week: The Rite of Spring 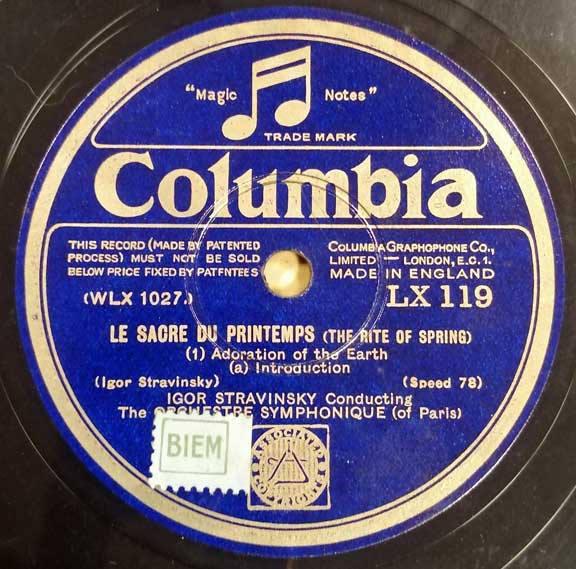 The following post is inspired by Igor Stravinsky’s famous work, The Rite of Spring. The audio featured below is an excerpt from a 12” 78 rpm disc from our archive, released on Columbia Records in 1929. Stravinksy himself conducts the Symphonic Orchestra of Paris.

I was drawn to this recording after recently going to see a revival of Pina Bausch’s 1975 staging of The Rite of Spring at Sadler’s Wells Theatre in London. This was performed by a company of dancers from African countries.

Pina Bausch (1940-2009) was a German dancer and choreographer who was enormously influential in the fields of dance and performance. She worked in the tradition of ‘Tanztheater’ (literally ‘dance theatre’), which marries many different creative skills.

The performance was not very long; it ran for about 45 minutes with no interval. While I was watching it, I kept thinking about the meaning of the title, and its association with the spectacle I was seeing. I found I was often unsure of what exactly I was looking at or whether there was an explicit plotline to follow. It looked to me like a metaphor of seasons passing, of a romantic relationship, but mostly, of an emotional battle framed through an erotically charged dance performance.

The colour red was used throughout the production. Red is the colour of tension, of a bullfight, or, perhaps, of sensual attraction. The pure aesthetic of the movements, and their role in narrating the plot, are probably the things I remember the most. The whole performance revolves around the intrinsic, entangled relationship between two disciplines: theatre and dance.

Ultimately, Bausch’s choreography tells a story of sacrifice. The woman with the red dress is hunted to death by the other men and women on stage.

There is a pervasive emotional tension that is difficult to evade. Whilst the recording we are posting today is not the version used in the stage performance, it relays that said emotional tension, which connects the two works of Bausch and Stravinsky.

Listen to The Rite of Spring (excerpt)

Pina Bausch’s legacy resides in her conception of a new language of dance. She is remembered as one of the most innovative choreographers of all times. Since her death in 2009, her works continue to be performed around the world. It is a testament to Bausch’s interpretative abilities that her choreography for The Rite of Spring continues to reach new audiences, spanning several decades and several continents in the process.