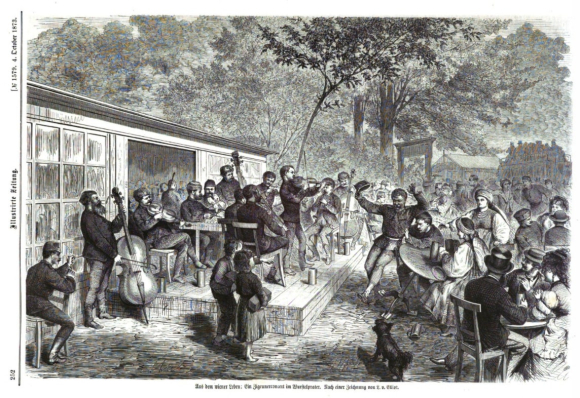 A scene from Viennese life; a Gypsy-concert in the Wurstelprater park’, Illustrirte Zeitung, 4 October 1873

This project, generously supported by a British Library Edison Fellowship, brings together traditional accounts of one of the great Viennese composers with the parallel story of the Hungarian national bands who worked in the same city, told by newspaper advertisements and also, crucially, by the earliest recordings of Hungarian traditional music. These were made in the decade or so after Brahms died in 1897, but cross-referencing the artists with the ephemera of performance publicity from the last years of his life confirms that they were either the same as the ones he heard, or dynastically related to them. The recordings, mostly commercial 78rpm discs, survive in archives and libraries and I am grateful to the Edison Fellowship for access to the material held in the British Library and the opportunity to explore it.

The connections between Brahms and Hungarian traditional music, or ‘Gypsy music’ as it was often referred to in Vienna, run deep. Though not Hungarian or Roma himself, he encountered it playing as a teenager with Ede Reményi, a revolutionary exile passing through his home town of Hamburg. It has often been cited as a possible influence on his compositions, and is the explicit root of his famous Hungarian dances. Just before beginning the Fellowship, I had written an article for Music & Letters - ‘Brahms Hungarian Dances and the early Csárdás recordings’ - based on material available online from Hungarian collections. I received invaluable help in that from the curators of these collections, especially Ferenc Szabó (formerly an Edison Fellow), Martón Kurutz and Illyés Boglárka of the National Széchényi Library, and in the course of our communications it became clear that there was still much to be discovered and so one of the first objectives of my Fellowship was to establish what might be held at the British Library.

London may not seem the obvious place to search for old Hungarian recordings but the Library is of course an international institution and many of the artists I was interested in had visited Great Britain, either as part of touring schedules or in certain cases in the express employment of the Royal Family here. Locating possible recordings involved considerable catalogue research, something that was new to me; I am again grateful for the help and expertise provided by library staff. Some of the results that turned up could be identified as duplicates of material from Hungary, but there were several that were completely unknown to me. The Fellowship gave me the opportunity not only to view and handle them but also to have some of them digitised in order to listen to what was on them, as in this one:

The first side is listed in the catalogue under the title on the label, ‘Repülj fecksém’. Listening to it reveals that in fact it comprises a medley of two tunes, of which only the first is ‘Repülj fecksém’, an old song melody identifiable from several other recordings in a similar slow hallgató style; in notated form it can be traced back to Színi Károly’s A magyar nép dalai és Dallamai. Hangjegyekre tette és kiadta Színi Károly. 200 dal (1865), no.51. The second tune is similarly identifiable as ‘Lenn a falu végén’, but this is not mentioned on side one though it curiously forms part of the title on the side two, apparently in error. This begs the question of what actually does appear on side two.

On listening, it transpires that this is another medley of two pieces, given the single title of ‘Csak egy kislány van a világon lent a faluvégén nem füstöl a kémény’. The opening melody is indeed ‘Csak egy kislány van a világon’, again unmistakable from earlier recordings and notations, whereas ‘lent a faluvégén nem füstöl a kémény’ is the part that refers to the music on the first side. The second tune on side two is therefore unnamed; it is in a lively dance rhythm and appears nowhere else, making it a valuable new discovery, since one of the foundations of my project was to compile a concordance of all melodies in the csárdás genre recorded in this early period. Therefore, as well as making it possible to clear up the confusion embodied in the original label, actually hearing this music has unearthed a previously unknown csárdás recording by the violinist Berkes Béla, whose band had previously visited Vienna in Brahms’s time and were favourites of the press there, as in this portrait in the city’s Welt Blatt newspaper shows. 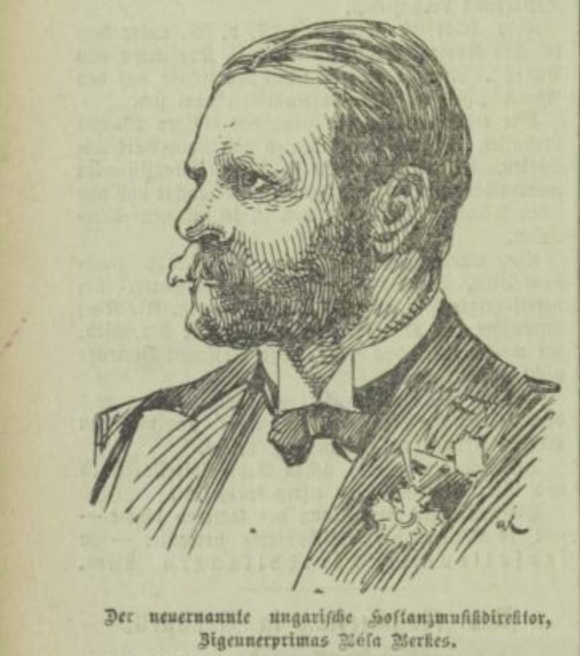 In addition, actually hearing the music to ‘Lenn a falu végén’ on this particular recording is invaluable in terms of understanding the interpermeability of melody styles and genres. Side one is unique in presenting the ‘Lenn a falu végén’ tune in a rhythmic guise as a foil to the slow ‘Repülj fecksém’, since other ‘Gypsy-band’ recordings have it as a slow opening hallgató in its own right; it also appears recast in a very different style in a number of military band recordings, with an unrelated title, ‘Csebogár March’. Side two, on the other hand, begins with some distinctively Romanian violin figurations, reminiscent of contemporaries like Grigoraș Dinicu from Bucharest, before launching into an equally distinctive Hungarian csárdás, demonstrating how conventions of national style were always blurred by musicians imitating and learning from each other.

Another objective of the project was to trace the survival of this repertory after the First World War, and I had the opportunity to hear otherwise unobtainable recordings by Hungarian bands from the Library’s collections. These are especially important because this style of music fell out of favour after 1918, when the focus of Hungarian nationalists like Béla Bartók and Zoltán Kodály was on collecting rural peasant songs, compared to which the music of what they called ‘Gypsy bands’ came to be dismissed as little more than an urban light music, or in Bartók’s words a ‘mass product for the half-educated multitudes.’

Even more catastrophic for the society that supported this music were the Second World War, the Holocaust and the suppression of minority identities under communism; and although ‘Gypsy music’ is a favourite genre among record companies now, it is often based on a different Balkan tradition that was called ‘Romanian’ on the pre-1914 recordings and premised on a more modern identity politics.

The final aim of this project is to tell the forgotten story of the many Hungarian musicians working in the classical ‘eternal city’ of nineteenth-century Vienna, and so re-evaluate their considerable contribution to its cultural life and their interaction with composers who lived there such as Brahms. Studying the early recordings is a vital part of this, because many of them were made by artists who worked regularly in Vienna and so confirm the repertories that they played, which can then be directly related to, for example, Brahms’s Hungarian Dances. They also provide an authentic insight into the performing style of the music, which can only be guessed at from the tantalising descriptions of the time, such as this one from Liszt:

…it seemed as if every possible sound or tone was crashing down together like mountain crests which fall with a frightful uproar on sheets of sand mixed with blocks of rock and stone. We felt uncertain whether the ceiling, which seemed to rock with these sudden displacements of sonorous currents and vibrations, would not really fall upon our heads; such was the crushing nature of the music which all the conservatories of the world would certainly have condemned and even we found to be just a trifle risky.

The recordings are thus essential in establishing the reality behind this kind of hyperbole and also in understanding how ‘classical’ composers such as Liszt came to view this music in such extreme terms. They also feed directly into performance, especially in my professional work with the ensemble ZRI, reimagining some of the great Viennese classics using the soundworld and instrumentation of Hungarian national bands. The recordings lie at the heart of both these projects and I look forward to studying them further in the future.

Posted by Jonathan Summers at 11:10 AM