Recording of the week: Never you mind!

Chatting today to our local fishmonger (Grimsby born and bred) I was reminded of a wonderful expression, back of Doig’s, submitted by a contributor from Grimsby (b.1939) to the Library’s Evolving English WordBank.

Listen to a contribution on Hawming about back of Doig's

The verb hawm has been recorded in this sense in several dialects, including in Lincolnshire, since the nineteenth century. It’s defined by the English Dialect Dictionary as ‘to waste time, to be idle, to move about aimlessly, to loiter, to stand gaping and staring’. The additional reference here to back of Doig’s is particularly intriguing as it’s also captured in a BBC Voices Recording in Osgodby, Lincolnshire in 2004.

Listen to a contribution on Egging back of Doig's

This more detailed description suggests that back of Doig’s is a playful expression, used especially by children to parents to deflect an unwanted enquiry as to what one has been doing or where one has been. This type of playful folk idiom is extremely difficult to observe as it typically occurs in private or domestic exchanges, often in the form of stock phrases or habitual responses to everyday situations. It is therefore rarely documented in linguistic surveys or conventional dictionaries. 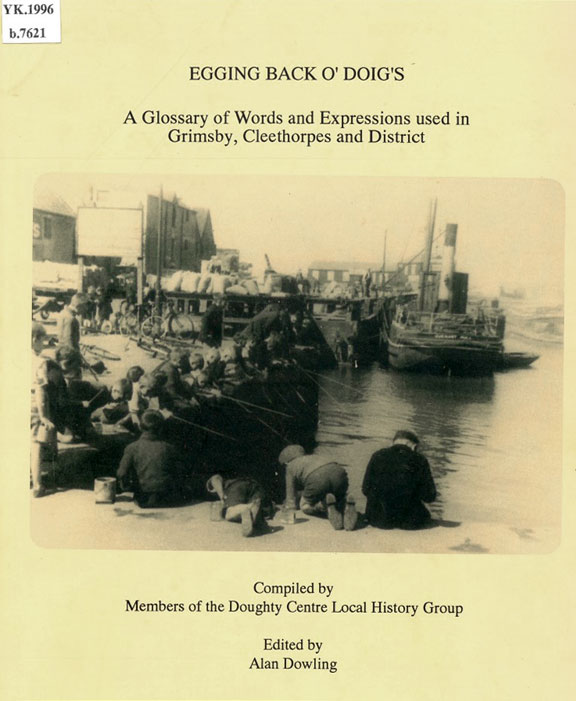 Egging Back O’ Doig’s, a 1995 glossary of words and phrases from Grimsby and Cleethorpes compiled by Alan Dowling, lists several such elusive local expressions. It has entries for both egging in the sense of ‘being on an errand’ and orming (a re-spelling of hawming to reflect the local tendency to delete an initial <h> sound) in the sense of ‘lounging about in a sloppy way, messing about’. This applies especially to ‘groups of youths gathered together without purpose’. It also confirms that ‘back o’ Doig’s’ is used in response to a nosy question or as a diversionary tactic to avoid an honest answer, expressing something along the lines of ‘mind your own business’. Lastly, it also confirms that local shipbuilder, J.S. Doig, had a shipyard in Grimsby docks in the middle of the twentieth century.