Recording of the week: Vaughan Williams Symphony No. 6 - the premiere

I was looking for something by which to celebrate the 150th anniversary this month of the birth of one of England’s greatest symphonic composers of the twentieth century, Ralph Vaughan Williams (1872-1958). His nine symphonies span more than fifty years from the first, which he began in 1903, to the last, composed in 1956 and 1957.

More than twenty years ago the British Library sound archive acquired the collection of engineer Kenneth Leech, who began to record radio broadcasts from the mid-1930s on to lacquer discs. I was delighted to discover that Mr. Leech had recorded the opening of the Symphony No. 6 from its first performance on 21st April 1948. 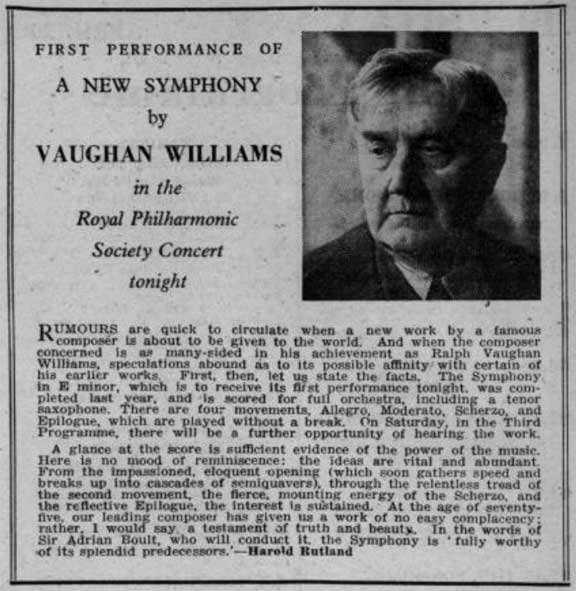 Adrian Boult is conducting the BBC Symphony Orchestra in a Royal Philharmonic Society Concert from the Albert Hall. The sound from the unique lacquer disc is low fidelity and the beginning is clipped, but the power and impact of the music of this arresting opening is undeniable. Apparently, this is all that has survived of that first performance.

Boult made a commercial recording of the work for EMI with the London Symphony Orchestra on the 23rd and 24th February 1949 at Abbey Road Studios, but he was pipped to the post by Leopold Stokowski who recorded it with the New York Philharmonic Orchestra for Columbia on the 21st February 1949 making it the first studio recording of the work. All of these performances are of the work before it was revised by the composer in 1950.