Recording of the week: ‘Raising her father’s grave: An interview with Titanic survivor Eva Hart’

This week's selection comes from George Brierley, Audio Cataloguer at the British Library.

It has been over 110 years since the sinking of RMS Titanic. In that time, there have been numerous attempts to raise the shipwreck from the bottom of the Atlantic. One of the first prominent expeditions to locate Titanic was financed by Texan oil tycoon Jack Grimm, setting sail from Florida on 17 July 1980.

A British Library collection of LBC (London Broadcasting Company) tapes (C1438: LBC/IRN Archive) is currently being digitised and catalogued. It contains an impressive 7,804 items of LBC radio programming, circa 1973-1996. The collection contains an interview with Eva Hart (1905-1996), one of the very few remaining survivors of Titanic at the time of Grimm’s expedition. Her interview was broadcast on 17 August 1980.

At the age of seven, Eva had been a second-class passenger on Titanic alongside her mother and father. The family were emigrating from England to Canada and had all their belongings on board. Eva and her mother were rescued via lifeboat, but she tragically lost her father in the disaster. Before Eva boarded the lifeboat, Benjamin Hart told his daughter to be a good girl and hold her mother’s hand, a scene that was recreated in James Cameron’s 1997 blockbuster film Titanic. These were his last words to Eva. His body was never recovered or identified. 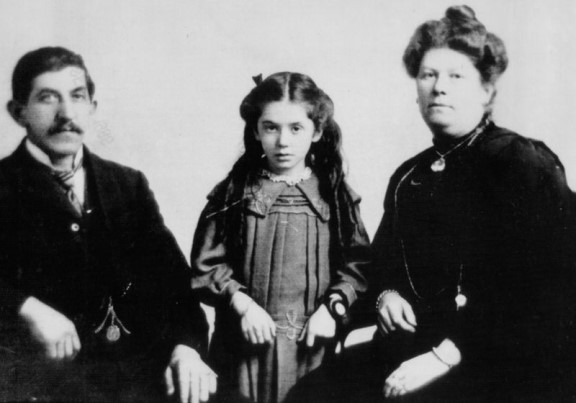 Above: Eva Hart (centre), with her father Benjamin (who perished on board Titanic) and her mother Esther, c. 1910s. Photograph from Wikipedia. Copyright: Public Domain.

Eva was living in East London in 1980. She talks in vivid detail about the night of the disaster to LBC presenter Rodney Bennett. Remembering the event ‘as if it were yesterday’, she describes the sinking of Titanic as ‘the most fantastically dreadful experience’. Interestingly, Eva’s mother had a premonition about the doomed ship in the days before the sinking. Esther Hart had been uneasy throughout the sailing, and had been wide awake and fully dressed when the ship struck the iceberg. This was one of the reasons why they were able to reach the deck in time to board one of the lifeboats. Eva had been conscious of her mother’s fear leading up to the disaster, and this heightened her own fear at the time.

Eva is against Grimm’s current search. She believes that if Titanic is found, it should be left where it is. In an excerpt from the end of the interview, she recognises that Titanic is an important historic relic, describing what she believes her reaction would be if she were to see it again.

Titanic is now protected by UNESCO and there have been no more attempts to raise it. Eva Hart’s recollection of the night of the sinking is harrowing, but puts events into a human perspective. It is understandable that she would want the shipwreck to remain undisturbed. The grave of her father has been at the bottom of the ocean for almost her entire lifetime.

Archives, Interviews, Radio, Recording of the week, Sound and vision