Recording of the week: the four rooms of creativity

Why do a corporate oral history? The late Wally Olins, co-founder of Wolff Olins, explains his mixed motivations in wanting to set up an oral history of the company – from an urge for immortality, to the representative nature of his firm, and the future context of an ever-changing business world.

Michael Wolff, another co-founder, uses a metaphor of a house with four rooms to describe the creative processes the firm uses. The first room is the one of 'great work' – the room of inspiration; the heroes in your field from whom to learn, and to prove from the strength of one’s own work that one is not a fake. The second is the room of ‘good reason' – firstly having the skill of selling by creating good reasons for buying in to things, while remembering that no project can satisfy every reason. The third room is 'precedent' – building on past successes, trying not to re-invent the wheel, but at the same time innovating. The fourth room - 'not knowing' - is the most exciting one; Wolff explains that creativity comes from being willing not to know anything, to force oneself into a dark empty space and trusting one’s creativity to transform it.

The Oral History of Wolff-Olins covers a cross section of individuals who contributed to the development of Wolff Olins, one of Britain's leading brand consultancies. Interviewees include founders Wally Olins, Michael Wolff, and Jane Scruton, designers, consultants, marketing and creative directors past and present as well as kitchen, administrative and support staff. The company's iconic branding work has included: First Direct (1989), Orange (1994), Tate (2000), London 2012 (2007) and Macmillan Cancer Support (2006). This National Life Stories project was recorded between 1987 and 2000. Over thirty of the interviews are available to listen to online at British Library Sounds.

Posted by Cheryl Tipp at 7:00 AM in Business , Contemporary Britain , Interviews , Oral history , Recording of the week , Sound and vision | Permalink

Women in the Electricity Supply Industry

23rd June is International Women in Engineering Day. To mark this we look at the role of women in the electricity supply industry, recently documented by National Life Stories in the project An Oral History of the Electricity Supply Industry in the UK.

In the 1920s and 1930s  the electricity supply industry was thought to offer opportunities for women engineers that were absent in other sectors and some of Britain’s pioneering women engineers including Caroline Haslett, Margaret Partridge and Beatrice Shilling worked in the sector.

Despite this optimism the electricity supply industry documented in An Oral History of the Electricity Supply Industry in the UK was one that employed few women engineers, even after the passing of the Sex Discrimination Act in 1975.  Mike Kay, who started his apprenticeship at NORWEB, the regional electricity supplier to north west England in 1978, observed:

Mike Kay on the lack of women engineers in 1970s Britain

Being the first to appoint a woman engineer was something senior managers remembered with pride.  Glyn England recalled doing so during his time at SWEB, the regional supplier for the south west:

So what was it like for these women engineers entering a largely male working environment?  Alison Simpson studied electrical engineering at Queen’s University Belfast, secured work experience in a power station and participated in the Scottish Engineering Training Scheme before joining the South of Scotland Electricity Board in 1979 as a trainee in commercial engineering, which involved working with domestic and commercial customers to design and install electrical systems. The lack of women’s toilets at the company’s engineering training facility was an early sign of the discrimination she later faced.

Alison Simpson on sexual discrimination in the workplace

Eventually Alison managed to secure the job as a distribution engineer that she had sought at the outset. This involved working on the high-voltage distribution network and gave her access to a wide range of training courses. These including training in climbing poles and transmission towers that allowed her to appreciate the work of the line staff who kept the system running.

Changes to the industry from the later 1980s, especially privatisation and the development of renewable energy sources, challenged its structures, leading to new opportunities for women with a range of expertise.  Lawyer Fiona Woolf developed an understanding of how power systems operated as a legal advisor to the Northern Ireland Electricity Service. This led to an appointment working for National Grid. She and her team wrote hundreds of agreements designed to ensure that a privatised industry really would keep the lights on, learning how to combine market rules with the laws of physics. (Listen to Fiona Woolf's interview on BL Sounds). 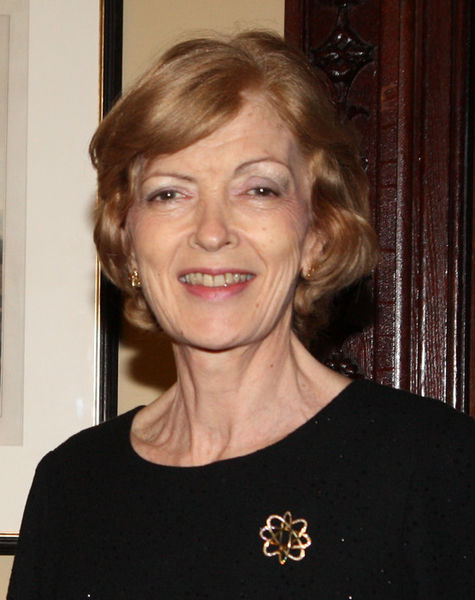 Fiona Woolf (2014). Courtesy of  the Foreign and Commonwealth Office

More recently renewable energy companies have provided new opportunities for women, including in leadership positions. Juliet Davenport studied physics and environmental economics before working on energy policy. She worked as commercial director of the UK subsidiary of German energy company Unit(e) and was part of a management buy-out of the firm that later became Good Energy, of which she is currently chief executive. In her interview she suggests that her background in physics was important in establishing her credibility in an industry where some of the existing operators were struggling to adjust to the new ways of doing things that renewable energy represents.

Juliet Davenport on establishing her credibility in the renewable energy industry