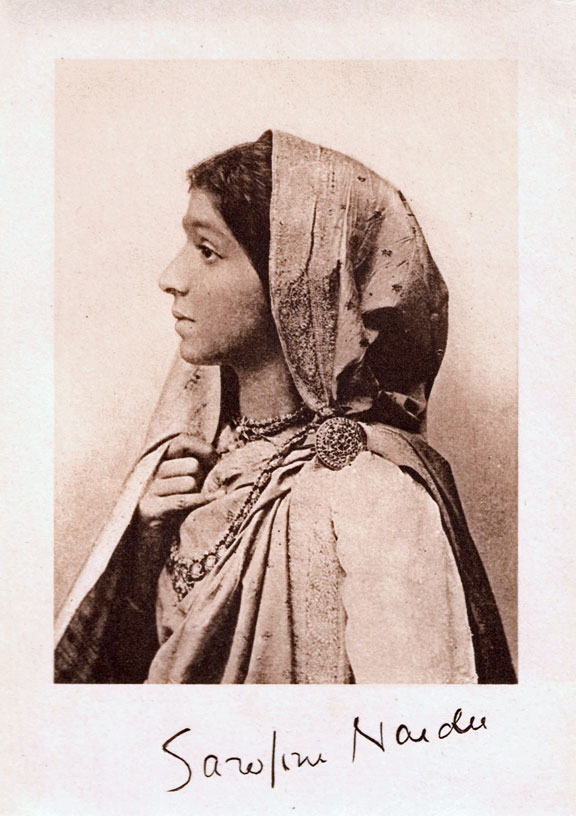 Above: Image from the 1928 edition of The Sceptred Flute: Songs of India (Dodd, Mead & Company, New York), first published in 1917. Photographer unknown.

For this week’s archive selection we present a recording by the Indian poet Sarojini Naidu.

As well as a poet, Naidu was a political activist. She was close to Mahatma Gandhi and joined his campaign of civil resistance against the British occupiers of India. In 1925 Naidu became the first female president of the Indian National Congress, the political party that led the independence movement.

‘Awake (“To India”)’ is taken from a 10” 78 rpm disc issued by the Columbia company. It was recorded and made in the UK, circa December 1931. Naidu would have been in London around this time. With Gandhi, she attended the Second Round Table Conference, which ran from 7 September to 1 December 1931. The three Round Table Conferences of 1930-1932 were convened by the British Government and Indian political leaders to discuss possible changes to the constitution in India.

‘Awake’ (or ‘Awake!’, as it was titled in print) was dedicated to the Muslim leader and eventual founder of Pakistan, Muhammad Ali Jinnah. The poem was recited by Naidu at the end of a public speech to the Indian National Congress, in Bombay (now Mumbai), in December 1915.

It is an appeal to all Indians to unite against British rule.

What is clear only in the published poem is that the final series of exhortations, beginning, ‘Mother!...’ are each attributed to different religious groups. This gives an effect something like a Greek chorus.

The closing lines are credited to ‘All Creeds’. 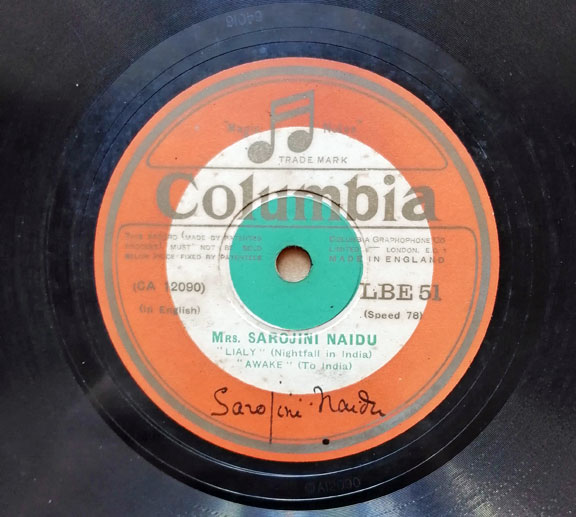 Our original disc is not in the best condition, so we offer two versions of the recording. The first version is a ‘warts and all’ archival dubbing.

The second version has been - quite dramatically - de-noised through the application of a new machine learning model developed by the Aalto University School of Electrical Engineering.

Note: the model was ‘trained’ using recordings of 78 rpm coarse-groove noise profiles and clean recordings of classical music. So we are not really using it as intended here, given that our disc is spoken word, not music.

The paper by E. Moliner and V. Välimäki - ‘A two-stage U-Net for high-fidelity denoising of historical recordings’, in Proc. IEEE International Conference on Acoustics, Speech, and Signal Processing (ICASSP), Singapore, May, 2022, may be of interest to those of a technical bent.

With thanks to Karl Jenkins, Audio Engineer, and Adam Tovell, Head of Technical Services.

Posted by Gail Tasker at 10:00 AM in Archives , Decolonising , Recording of the week , Sound and vision , South Asia , Women's histories | Permalink