Join us on Monday 12 October at the British Library Conference Centre to reflect on the first three years of the Listening Project: an audio archive of conversations recorded by the BBC in which people are invited to share an intimate conversation with a close friend or relative.

These one-to-one conversations, modelled on the US StoryCorps project, last up to an hour and take a topic of the speakers' choice, collectively forming a picture of our lives and relationships today. The conversations so far gathered cover a huge range of life experiences told from the perspective of the people who have lived them, from birth to death and everything in between. The collection currently consists of 650 conversations made by contributors from 7 to 101 years old, recorded in all four corners of the UK and includes people who have moved here from across the globe.

The conversations can be listened to in full on the Library's Sounds website while the edited BBC radio programmes are available on the BBC Listening Project website.

The event includes a panel discussion chaired by presenter Fi Glover in which BBC producers reflect on the process of making the recordings and the impact of broadcasting excerpts, Listening Project participants discuss their experience of contributing to the collection and library curators and researchers explore the potential for using the online Listening Project archive for a variety of research purposes as it continues to grow.

The Listening Project booth will be making a stop at the Library especially for the event as part of its nationwide tour. 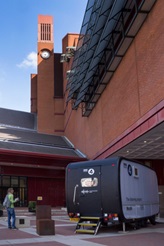 Tickets are free and can be booked via the British Library Box Office.

Being immersed in the BBC Listening Project collection at the British Library for the last three years has felt a bit like embarking on a compelling and often emotional journey around the UK without ever needing to leave my desk.

The Listening Project is a collection of 40-minute conversations between two people who have decided to take the time to talk about something of their choice that they might not otherwise have the opportunity to discuss.

The topics include a fascinating range of unusual lifestyles or jobs, such as living with wolves, being a polar explorer, performing as a drag queen, working as a soul midwife and being involved in the peace movement. There are inspiring and moving accounts of surviving sickness and trauma as well as living with terminal illness, disability and mental illness. Family experiences such as love, partnership, pregnancy, birth, divorce, death, adoption and infertility all feature in the collection, including what it’s like to have an arranged marriage, to be a single parent, to come out and to survive domestic abuse. 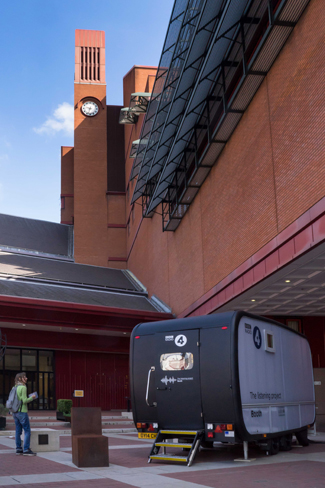 The Listening Project recording bubble at the British Library

Widening the scope of the project beyond national borders, people share their experiences of moving to the UK from other countries including Poland, Iraq, Jamaica, Afghanistan and Uganda. There are also personal accounts of historical events such as the Second World War, the Northern Ireland Troubles, the Holocaust, the 1974 Miners’ Strike and the Nagasaki atom bomb.

A conversation that particularly haunts me is the one in which Tricia describes to her friend Carol the experience of spending some of her teenage years and most of her twenties in the terrifying psychiatric hospital High Royds near Leeds in the 1980s.

Her description of the imposing Victorian architecture and incomprehensible mental health system which she did her best to resist is unforgettable and extremely powerful, as is her subsequent release, recovery and experience of returning to and photographing the building when it was closing down in 2003 which was for her a kind of healing process. It is a privilege to hear the story of this part of Tricia’s life as described by her and to be able to archive it in the British Library, making it accessible in perpetuity.

I sometimes wonder what researchers in 100 years’ time will make of the experiences and preoccupations of the people who have shared their stories as part of the Listening Project and of the wider society that these small insights into their lives reflect.

The recordings cover the length and breadth of the UK, from the South West of England to the Orkney Islands off the northern coast of Scotland, from East Anglia through Wales and over to Northern Ireland. The youngest speaker is 7 year old Felix talking to his brother Kit about being siblings in the twenty-first century and the oldest is 101 year old Muriel talking to her son Julian about her memories of the First World War.

With more than 650 searchable recordings available to listen to worldwide on the British Library Sounds website there is almost no limit to where you might be transported and what you might learn from someone else’s experience of life. So I invite you to join me, open your ears and mind and begin your own journey via the conversations of others.

The Listening Project Booth will be at the British Library in St Pancras on 10 and 11 June 2015 before touring all four corners of the United Kingdom.  Visit the Booth on the piazza to find out how you can record a conversation, which will be broadcast on BBC Radio 4 and archived by the British Library.

Posted by Jonnie Robinson at 10:00 AM in BBC , Oral history , Radio , The Listening Project | Permalink | Comments( 0)

The Listening Project on BBC Radio 4 is now in full swing; you may have seen the ads on BBC TV. Here at the Library we were excited to see them and listen to the programmes for the first time, because they represent the culmination of a great deal of work behind the scenes over the last few months.

The Project aims to capture the nation in conversation: to record intimate conversations between loved ones and broadcast them to the nation. It’s oral history, but with a twist; the interviewer is a close friend or family member, and the emphasis is on relationships, on conversations rather than storytelling. Our curator Jonnie Robinson talks about this in more detail on the BBC Radio 4 blog.

There’s been a lot of press coverage of the Project. One of my favourites was an article in the Guardian on ‘the art of eavesdropping’ which sparked an entertaining discussion in the comments section about overheard conversations. But, of course, these conversations aren’t overheard; they are recorded in a local BBC Radio studio, or uploaded by listeners. So rather than the often unintentional humour of everyday chitchat, the subject matter is rather serious; conversations cover loss, aging, illness and terrorism. What is refreshing is that, despite the subject matter, the speakers are largely optimistic. The emphasis is on getting on with life despite their difficulties.

The Library will receive the first batch of recordings for archiving this month, and we’ll be posting some comments on the material that has been collected, and some thoughts about how it could be used by researchers, teachers and writers.

The first few programmes have now been broadcast and there are lots of recordings on the BBC website to listen to, or you can download the podcast.

Find out more about our involvement in the project

The Listening Project: Capturing the nation in conversation

Yesterday saw the launch of The Listening Project, an exciting new collaboration between the BBC and the Library in which members of the public are invited to share intimate conversations with friends and family. A selection of these conversations will be broadcast on BBC Radio 4 and local radio stations then the original recordings preserved for future generations in the Library’s archives as part of our vast oral history collections.

The conversations should make fascinating listening. Fi Glover – the programme’s presenter – speaks of the ‘humbling’ experience of being privy to the thoughts, memories and hopes of the nation. For researchers, the conversations also represent a unique social, linguistic and historical record. The Project was inspired by Storycorps, an astonishing scheme in the United States, which - in the last decade - has gathered over 40,000 recordings of conversations of Americans of all backgrounds. The StoryCorps recordings are preserved in the Library of Congress.

Broadcasts will start on Radio 4 on 30 March and the Library’s curators will be blogging about the conversations and highlighting related materials in our collections.