In a move described as ‘unprecedented’ (a word we’re all too familiar with in 2020), the OED this year declined to nominate its Word of the Year choosing rather to provide a list of potential candidates. But, like the BBC Sports Personality of the Year awards (SPOTY), I shall adopt the principle of Dinner For One – a British film, barely known in the UK, but a much-loved New Year tradition in Germany – and follow the ‘same procedure as last year’ in selecting the unofficial British Library Sports Word of The Year (SWOTY). Although pandemic-inspired vocabulary dominated sports media coverage this year (I first spotted furlough in the Guardian Sports pages in March, biosecure bubble in June and Covid-ball in August, to name but a few), I’ve restricted this selection to terms that reflect sport’s more enduring appeal. So, here are the ten nominees for SWOTY 2020, selected from a review of words and phrases gleaned from mainstream broadcast and press coverage in the last twelve months:

January (Vic Marks of England batsman Dom Sibley, Guardian Sport): 'England fans do not wish to watch any more repeats of the Nicker of Sibley.'

January (David Conn on the increasing influence of betting companies in elite sport, Guardian Sport): 'Football supporters, including young people growing into their love of the sport and its heritage, now have gamblification intervowen with it.'

May (Andy Brassell on the resumption of Bundesliga fixtures, Guardian Sport): 'The phrase Geisterspielen (sic) is about to become part of international, rather than just German, football.'

June (Martin Tyler of some footballers reaction when presented with a goal-scoring opportunity, Sky Sports): '[like a] jigsaw he goes to pieces in the box.' October (Jonathan Liew of the England men's manager’s attempts to boost player confidence, Guardian Sport): 'You can see why Southgate is so keen to pump their tyres.'

December (Vic Marks of own final game of golf before second UK-wide lockdown, Guardian Sport): 'For my last shot on a golf course for at least a month I was confronted with a Dennis Wise.'

Inevitably, this year’s list comes from a reduced set of sources compared with previous years. As virtually no sport was possible for several months from March, broadcasters had little to offer beyond highlights reels and review shows, while newspapers typically reduced their coverage from multi-page pull-outs to one or two pages devoted to speculation about when sport might return and how it might need to adapt. Rather frustratingly, this year’s list therefore only includes four sports: golf, cricket, football and rugby union, although one of the entries attributed to rugby is in fact a horse racing metaphor. More frustratingly, the nominations also reflect the precedence given by sporting bodies in this ‘unprecedented’ year to (a) elite professional sport – possibly justifiable – and (b) men’s sport – extremely contentious, if depressingly predictable. In a year when sportsmen and women have united impressively in taking the knee to condemn racial injustice and inequality, the Library’s current exhibition highlights how the fight for a level playing field for women in sport, despite notable successes against the odds, remains Unfinished Business.

As ever, this year’s selection illustrates a range of linguistic phenomena and includes dialect (i.e. localised variants, e.g. pump someone’s tyres), slang (i.e. informal forms, e.g. Emptyhad and Dennis Wise) and jargon (i.e. specialised vocabulary, e.g. Nelson). Geisterspiele and ketchup effect offer a glimpse of the occasional welcome presence of languages other than English in British sporting discourse, while gamblification is a fascinating example of how we manipulate English grammar to create new words. The other three – Nicker of Sibley, fall at the Melling Road and jigsaw – are, I suspect, neologisms (i.e. unique expressions coined by the user for a one-off occasion), although fall at the Melling Road might enjoy wider currency. All ten demonstrate how sporting discourse in the press and broadcast media is a wonderful platform for exposing vernacular English to a mainstream audience.

The phrase pump someone’s tyres [= ‘to praise someone in order to boost their confidence’] might be unfamiliar to speakers of British English, but is common in Canadian sporting discourse, especially in relation to ice hockey, as confirmed by an entry at Wiktionary. Nelson [= (in cricket) ‘a score of 111’], originally an Australian dialect form according to the OED, is apparently a reference to Lord Nelson’s one eye, one arm and one leg (despite that not being an accurate reflection of his physical characteristics). As with many sporting terms it has gained wider currency and is now used throughout the cricketing world (i.e. parts of the Commonwealth) and a Nelson is considered, perhaps especially in England, an unlucky score.

As a former teacher of German, I’m always particularly excited to stumble across foreign words in English, hence the inclusion here of Geisterspiel [= ‘football match played without spectators’]. The word came to prominence in May when the German Bundesliga became the first major football league to resume competitive fixtures post-lockdown, albeit matches took place behind closed doors. Early reports of the phenomenon frequently include the original German word in italics or quotation marks, but a direct translation in the form of the calque, ghost-game, has now appeared twice in the Guardian this month alone. The fact it now appears in normal font suggests it has swiftly been absorbed into general sporting parlance, although a New Word submission to Collins suggests the Guardian’s use of a hyphen is not universal. Equally intriguing is ketchup effect [= ‘a period of minimal progress followed by a sudden wave of spectacular results’]. In Swedish, the expression ketchupeffkt is common in sporting circles to describe the conviction that a prolonged period of bad results or poor form can swiftly change to a period of sustained success, mirroring the frustration and anticipation we experience when pouring sauce from a bottle. It was even voted Swedish Word of the Day by The World News website in 2018. 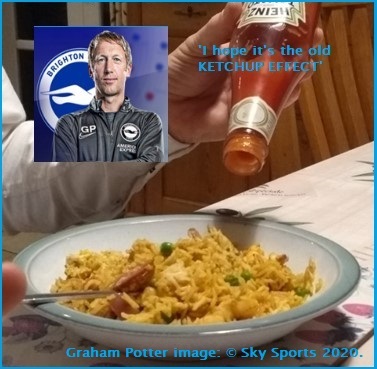 Two forms, Emptyhad [= ‘Manchester City’s Etihad stadium’] and Dennis Wise [= (in golf) ‘deceptively awkward short putt’], capture the irreverent, tongue-in-cheek nature that often characterises sporting slang. Both require an intimate knowledge of recent sporting history and culture. Supporters of rival teams use the term Emptyhad to mock a perceived lack of atmosphere at Manchester City’s Etihad stadium for midweek Champions League fixtures, which are seldom as well-attended as one might anticipate, given the club’s fan base and recent dominance of English domestic football. Dennis Wise, on the other hand, is an ex-professional footballer, whose diminutive stature belied a skilful and combative talent, thus explaining the ironic nickname among golfers for a ‘tricky little five-footer’.

The neologisms, jigsaw [= (of footballer) ‘to display obvious signs of nervousness when close to goal’] and Nicker of Sibley [= humorous reference to the frequency with which England batsman Dom Sibley is dismissed caught behind the stumps], reveal a similar kind of linguistic playfulness. The image of a jigsaw puzzle ‘in pieces in the box’ is a wonderfully witty re-interpretation of the idiom ‘to go to pieces’, in the sense of to succumb to extreme nerves, in the corresponding box on a football pitch (i.e. the penalty box). In cricket, a ‘nick’ refers to a batsman making the briefest of contact with a ball, resulting in a simple catch to a wicket keeper or slip fielder. The fact one particular England batsman, Dom Sibley, became prone to ‘nicking off early’ explains the amusing allusion to the popular BBC sitcom, The Vicar of Dibley, which by strange coincidence reappeared on our screens this month. The other potential nonce-form, fall at The Melling Road [= ‘to fail at an early stage of an enterprise’] is an imaginative extension of the idiom ‘to fall at the first hurdle’. As all horse racing fans will know, the Melling Road crosses the Aintree Grand National course on the approach to the first hurdle, so to fall at the Melling Road is to fail both spectacularly early and embarrassingly incompetently.

Finally, disquiet at the increasingly close relationship between elite sport and betting companies is reflected in gamblification [= 'process by which gambling industry pervades sport']. Not yet sufficiently well established to merit an authorised dictionary entry, gamblification is included in the crowdsourced Macmillan Open Dictionary from January this year. Clearly a recent coinage, its pseudo root verb, gamblify, feels unnatural and is, I suspect, only really likely to occur in the passive – hence I’ve noted several examples of derived forms, such as gamblified and de-gamblified – but the noun, gamblification, is to date by far the most common.

Several of this year’s entries are captured in The British Library’s Newspaper and Contemporary British collections, making the Library an incomparable resource for monitoring vernacular language. As far as the winner is concerned, I’m extremely tempted by Geisterspiel, especially as it came a disappointing 8th in the Duden Wort des Jahres list (behind the rather predictable Coronapandemie), but I’m going to plump for ketchup effect. At the end of such an unprecedented year it seems to convey a refreshingly positive view of how the immediate future can improve beyond all recognition, contrary to evidence from the recent past. And ketchup is, after all, very much a seasonal colour!