Coming over all emotional

What a marvellous experience London 2012 is being! Not only have the Games themselves – the athletes and the fans – been wonderful, but so far none of our worst fears have come true: traffic dislocation – the Tube is working fine; gridlock – it never happened. Everyone I know is glued to the TV or else actually attending events, ticketed and un-ticketed. I’m off to see the open water swimming in Hyde Park on Thursday and I’ve got my flag packed and everything.

Several of my colleagues have participated in the opening ceremony and I have prevailed upon one of them – Matthew Shaw of the Americas Section – to tell us about his experiences as one of the cycling doves. Here’s an earlier post of his on the Americas web page, just to give you a taster. http://bit.ly/M34D2O Matthew had a few pictures taken of himself, one of which revealed that the designers had taken the trouble to paint a beak on his face (didn’t spot that at the time). Hilarious – and quirky; in fact just what I hoped the London Games would bring to the Olympic experience. See the doves in training on the BBC website http://bbc.in/Mpe3Wo

Lots of other colleagues have trooped off to the Olympic Park to see the opening ceremony and events like the athletics and the swimming. All have come back enthusing about the organisation of the events, the beauty of the Olympic Park flower gardens and the helpfulness of the volunteers. They have also deluged me with pictures some of which (like this one) will be adorning this blog. 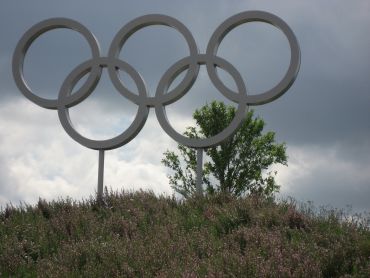 So the much talked about feel good factor really is tangible. On the Thursday before the Games started, the Olympic torch made its way to King’s Cross, close to the Library, and seeing it arrive, heralded by a stirring of excited voices in the watching crowd and a ripple of expectation which seemed to flow down the street and made you catch your breath, was an amazing feeling; even the most cynical observer must have been moved by it. It definitely felt as if the huge crowd of onlookers was sharing something out of the ordinary, as if the emotion and the feeling of connectedness were flowing from some sort of collective consciousness (sorry to go all Jungian on you but that’s the only way I can describe it).

Much has been said, by the athletes themselves, and by other commentators, at home and abroad, about British sport fans and their huge contribution to athletic performance and to the sense of occasion. One of my most deeply felt joys (yes I know I don’t get out much) was seeing Millwall win a match at the old Den which they looked almost certain, at one point, to lose, and again there was this sense of connectedness, this feeling that the emotion of a crowd had changed things. It’s quite an amazing thing to be caught up in.

There have been quite a few studies undertaken about this phenomenon and about the phenomenon of fandom generally, though most of the research has focussed on football crowds from a variety of perspectives good and bad. This Olympics has been distinguished by the enthusiasm of these benign crowds, these people with a desire to share in the experience and to benefit from it in subtle and not so subtle ways. People want to drink at this fountain of well-being.

Posted by Gillian Ridgley at 8:22 AM