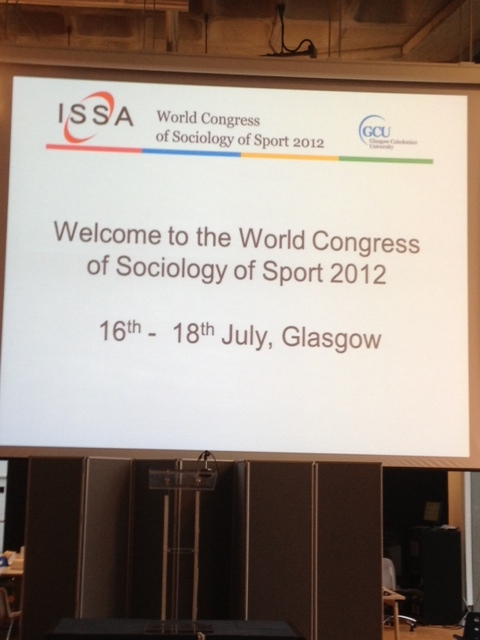 The organiser of London 2012, Lord Coe, has demanded more compulsory sport in school ‘to capitalize on the enthusiasm generated by the Olympics’, as the London’s Independent (http://tiny.cc/hd1niw) reports. As I wrote in a previous post, the words ‘compulsory’ and ‘sport’ in the same sentence still have nightmarish reverberations for me. However, I’m willing to reconsider. Especially if Professor Peter Donnelly’s invitation to allow people to be bad at sports is taken on board.

Peter Donnelly is a professor in the faculty of kinesiology and physical education at the University of Toronto. He was only one of the numerous speakers who presented papers at the recently-held world sociology of sport congress (ISSA), at Glasgow Caledonian University, 16th – 18th July 2012. The title of this year’s event was: “Sport: Challenging Boundaries”. And indeed, that’s exactly what it did.

Over four days, young researchers and experienced academics from numerous countries presented their work. In parallel sessions, topics such as the evolution and future of mega-events, the inclusion/exclusion of gay and lesbian in sports, corruption and clientelism in Argentine football, and the increasingly vague meaning of words such as ‘sustainability’ in Olympic bid documents were addressed and discussed.

I don’t have the space to give even a brief summary of all the papers that were presented. Hopefully, some of them will find their way onto the pages of the International Review for the Sociology of Sport, as well as other media. Among the most attended papers were those dealing with various aspects of the Olympics. Various interpretations of the notion of ‘legacy’ were explored; questions were asked as to what exactly can be considered a legacy, and whether it can be measured.

Perhaps unsurprisingly, a lot of attention and criticism was devoted to the IOC and the often perplexing lengths governments are willing to go to in order to win an Olympic bid. In fairness, neither the Games nor the IOC were depicted as entirely negative or malevolent. But it was refreshing to see the ‘sociological imagination’ applied to examine some extravagant claims and to question commonly-held assumptions, such as the ability of the Olympic to ‘inspire a generation’ and to create harmony and smooth out conflict often ascribed to sport.

Another theme that was explored was the extent to which sport is and can be truly inclusive. Some fascinating papers explored the links between patriarchy and the world of sport. To a large extent, sport remains a favourite arena for the displaying and the reproduction of dominant ideas of masculinity and heteronormativity. However, as Jonah Bury, of the University of Bristol, pointed out with reference to English association football, the way in which footballers are expected to ‘come out’, i.e. through the media, can be problematic in itself. Yet, it is true that overt gay participation in main sporting events is still minimal and is a source of ‘invisibility’. This can be also said of the presence of women in the world of sport, in which sport reporting was included. According to one speaker, in spite of the undeniable advances that have taken place, it is still predominantly males – for example – that act as experts in the world of sport reporting.

It is not possible, here, to do justice to the scope of research that was presented in Glasgow. What was clear, however, was the fact the field of sport sociology has reached maturity. There are innumerable areas of investigation to be discovered and re-discovered and their relevance extends far beyond the realm of the individual sport or sports concerned. Hopefully, this blog, the Sport and Society website and, ultimately, the resources of the British Library will assist present and future researchers. It is certainly my hope that they will.

Posted by Simone Bacchini at 1:22 PM