The British Library has a television and radio news recording service which we call Broadcast News (and yes we were partly thinking of the wonderful 1987 film of the same title with William Hurt and Holly Hunter when we named it). Broadcast News has been recording UK free-to-air television and radio programmes since May 2010 and currently we take in just over 60 hours of news per day - 40 hours of television, 20 hours of radio.

We take the news from most of the channels which you may find on Freeview or Freesat, so not just BBC, ITV and Channel 4, but Sky News, Al-Jazeera English, CNN, NHK, Russia Today, France 24 and others. We don't record their 24/7 entirety. For the terrestrial channels (BBC, ITV etc) we only record the news programmes while for 24-hour-news channels we record a selection, usually two or three hours per channel, and as far as possible the same time slot every day. The aim is to ensure good coverage across the day, and to guarantee consistency of coverage. 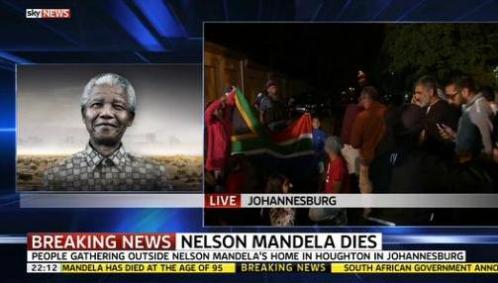 Breaking news of the death of Nelson Mandela on Sky News, 5 December 2013

And then you get breaking news. The death of Nelson Mandela on 5 December 2013 was one of those events where we throw open gates and do blanket recordings of all the relevant news broadcasts to capture the moment in history in full. Of course the idea of 'breaking news' has been somewhat devalued of late, when almost any news story that's about to come up can get labelled as breaking news, rather than the earth-stopping stories that are traditionally associated with the concept. But breaking news is largely an invention of the 24-hour-news era, where the continuous stream of information gets interrupted by the extraordinary. 24-hours-news has to have breaking news, periodically and consistently - the concept is fundamental to how it operates. 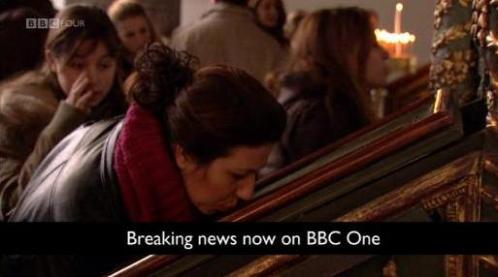 The breaking news message on BBC4's Byzantium: A Tale of Three Cities, 5 December 2013

News of Mandela's death was announced in the UK at around 21.45. I was watching a BBC4 programme on Byzantium at the time, and intriguingly a headline flash appeared telling me that there was breaking news on BBC1, but it didn't tell me what the news was. Viewers on BBC1 had been watching a repeat episode of the sitcom Mrs Brown's Boys when the channel cut to the announcement of Mandela's death made by President Jacob Zuma, something which led to 1,350 complaints being made to to the BBC. BBC1 then continued with a special news broadcast at 22:00 and continued with Mandela news specials through to past midnight. Thereafter the BBC News channel continued with the non-stop Mandela news throughout the following day. Likewise Al-Jazeera English, CNN, Sky News, France 24 and BBC World Service radio broke into their usual news coverage around 21.45 on the 5th and continued round the clock for the next 36 hours or so before other news stories really began to intrude once more. CNN's exhaustive coverage was particularly interesting to see, given that Mandela does not seem to have had as big a profile in the USA as in Europe or Africa (to judge by the many comments to be found online wanting to know what the man did and what his significance was).  China's CCTV news, which normally keeps to the top-of-the-hour news schedule, unusually broke the Mandela news at around 21.50 and kept it as its main topic for several hours. Russia Today, ever the maverick, broke the news through its rolling bottom-screen text and included it in its headline stories thereafter, but did not upset the schedules at all. 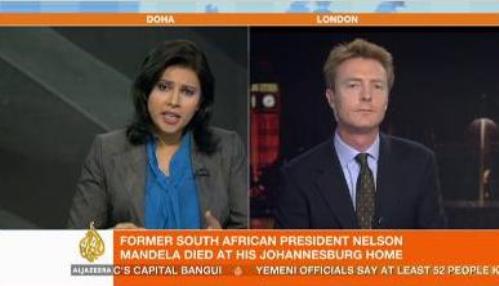 Eventually breaking news is broken, and the channels return to the regular diet and schedules. The death of Mandela was no surprise, of course, and all of the channels had ready-made obituary packages. The challenge was to find enough interviewees to represent the breadth of Mandela's influence and personal history, and to deliver eulogies alongside predictions for the future that offered sufficient variety. Thereafter the challenge for news editors was to judge the magnitude of the story. The BBC received many complaints about the extensive of its coverage, particularly at a time when the UK audience was particular interested in news of stormy weather hitting the east of the country. Of course, the death of one of the twentieth century's leading figures is of greater significance than a passing weather system, but news is meant to be of the moment - to be about what is passing, not what is past. The blanket Mandela coverage was appropriate to the man's significance, but in the transference from news to eulogy and retrospective the objections raised by some viewers may have been at seeing news programmes that were not any longer offering (as they saw it) news. 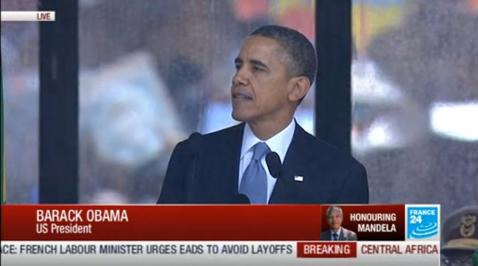 After a relative lull, during which we reverted back to our regular daily news recordings schedule, there followed the four-hour memorial service on 10 December We recorded this in its entirety as broadcasts on BBC News, Al Jazeera English, CNN, France 24 and BBC World Service (CCTV, NHK World, Russia Today and other channels that we record did not have specials on the memorial service, nor on the  subsequent funeral). Of course it was the same service on each channel, but each added its own commentary with numerous cutbacks to interviewees to break up the service's several longeurs, including the many long and indifferent speeches that marred a ceremony that was further afflicted by heavy rain, empty stretches of the FNB stadium at Johannesburg, the booing of Jacob Zuma, David Cameron and Barack Obama's contentious 'selfie', and the embarrassment of fake signer Thamsanqa Jantjie (news of whose bogus gestures broke the following day). The visual media can capture the special significance of the moment with great power, but can also expose the absurdity of human things all too acutely. Aside from Obama's soaring speech, the memorial service offered too much fodder to cameras that naturally picked out the sodden, the verbose, the bored and the off-guard. Who will now be able to watch Obama's great speech without being helplessly distracted by the man signing gibberish to his left? From the BBC News coverage of Nelson Mandela's funeral, 15 December 2013

Happily the funeral service at Mandela's childhood home of Qunu on 15 December was a model of good organisation. The tribute was fitting to the man, finding the right balance between pomp and modesty. We recorded the BBC News, CNN, Al Jazeera English, Sky News and BBC World Service programmes, which along with all of the regular news programmes recorded over the 5-15 December period amounts the several hundred hours of TV and radio news dedicated to the death of Nelson Mandela that we are now preserving and making accessible in our Reading Rooms.

Of course we have more than just TV and radio news on Mandela's death. We will have taken in every UK newspaper over the period, and because we are now able to archive UK website were have been able to many online news reports, tributes, commentaries and comments which should offer a more diverse and even critical account of the man's passing than TV news's perhaps rather linear and hagiographical approach can offer. The point is that news does not exist in its entirety in any one medium. Each plays its part - print, TV, radio, online - in providing the breadth and depth such as news story merits. The great marvel of news today is the choice on offer, the diversity of content, the extension in so many ways of what we understand to to be news (noting of course that not all societies enjoy equal choice of news sources). It is for us to choose wisely from what is on offer if we want to be properly informed. We have the privilege, and the responsibility, of choice.

Welcome to The Newsroom, the British Library’s new news and media blog. Its aim is to provide the news about yesterday's news, and to look to where news may be going in the future. It will inform you about aspects our collections, provides guides to their best use, and reports on activities in news production and news-related research.

The British Library has one of the world's greatest news archives. Our collection of UK, Irish and world newspapers numbers over 60 million issues, from the 17th century to the present day, and we have growing collections of television, radio and web news. In March 2014 we will be opening our News and Media Reading Room at our London site in St Pancras (for more information, see our guide to our Newspaper Library moves). The new reading room will bring together print, television radio and web news resources in an exciting new media research environment, one that reflects the ways in which news production itself is changing. 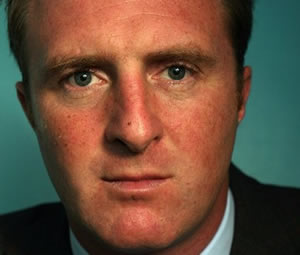 There will be various events to help mark the change in our news service from the Newspaper Library at Colindale (now closed) to St Pancras. Among these are lectures we are organising in the name of W.T. Stead, the transformative 19th-century journalist whose multi-faceted involvement in news production and the media of his time was celebrated at W.T. Stead: Newspaper Revolutionary, a conference held at the British Library in 2012.

The first W.T. Stead Lecture will be given by James Harding, director of BBC News & Current Affairs, on 13 January 2014. Harding’s career is indicative of the great changes taking place in the news and media industries. He has recently moved from being editor of a leading national newspaper, The Times, to heading the BBC’s news service. This looks like part of a growing trend. BBC Director General Mark Thompson left the corporation to head the New York Times, and the BBC’s former head of Future Media & Technology, Ashley Highfield, is now CEO of the Johnston Press, which publishes many local newspapers in the UK. The skills in the one medium are becoming essential for understanding the other media.

Harding’s lecture will reflect upon the place of news in a changing media landscape. We now have more ways than ever before to access the news, but how does this affect the way that news is produced, communicated and consumed? Is news itself changing, or is it just how we find it and use it that is changing? What is happening to the role of journalism in a multimedia, multiplatform environment? These questions are important not only for understanding news today, but for building the news archive of tomorrow.

Further information on James Harding’s lecture, with details on how to book, can be found on our What’s On pages.

Posted by Luke McKernan at 3:19 PM