January 2014 naturally sees the start of many First World War centenary commemorations, even if the war itself did not begin until 28 July 1914. Newspaper sources are going to be greatly value by researchers, programme makers, project organisers and the general public during the 2014-2018 period, as people seek out the authentic experience of what it was like to live through such a cataclysmic, global event. 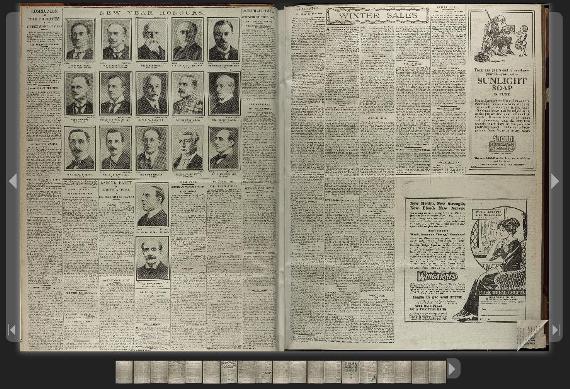 The Daily Telegraph for 1 January 1914, from http://www.telegraph.co.uk/news/ww1-archive

Perhaps first out of the blocks as far as newspaper resources are concerned is the Telegraph's very welcome initiative to make the entirety of its 1914-18 archive freely available online, issued day-by-day from 1 January 1914/2014 to 31 December 1918/2018 in PDF format. The paper is presented through a simple, intuitive browser than turns the pages as you browse through, offers a row of thumbnails for quick access, and has the usual zoom, printing and sharing features.

Each issue appears on its centenary, so there will no browsing through the entire archive for an overall picture of the war until the end of 2018. Each issue is downloadable in PDF. There is no OCR or word-searching, which is disappointing, but each issue does come with a summary that points interesting items, with pages references - so, 1 January 1914 gives us the New Year's Honours list (a knighthood for physicist Ernest Rutherford), reports on the return of Paris of the 'Mona Lisa' following its 1911 theft, and tells us that the tango has been banned on Ontario. The leader (page 11) reassures its readership that “Happily, our foreign relations are such as to cause no sort of uneasiness. Our friendships have been kept in sound repair, and there has been a steady improvement in the tone and temper of our intercourse with Germany. Everyone will hope that the New Year may pass without the outbreak of further trouble in the Near East.” Good news with which to start the year, at any rate.

Other newspaper archives and news sources can be expected to follow suit in showing us the daily war, though probably nearer to July. More on these as and when they appear. Meanwhile, the British Newspaper Archive (which makes digitised newspapers from the British Library available on a subscription basis) has 42 British regional newspapers available for the 1914-1918 period, from the Aberdeen Evening Express to the Western Times, all fully word-searchable.

It's important to note that though newspapers were the primary source of news information for the public during the First World War, they were no longer the only news medium. Newsreels were appearing twice-weekly in cinemas to audiences comparable to the reach of any popular newspaper, and gave people a different view of the war, or expectation of what they might view. But that's the subject for another post.

Posted by Luke McKernan at 5:11 PM