100 years ago, on 2 February 1914, the film Making a Living was released by the Keystone Film Company. It was a comedy, one reel long (1,000 feet, or around 10 minutes), directed by Henry Lehrman. The star was a British comedian, newly arrived in Hollywood, whose first film it was. The actor was Charles Chaplin. 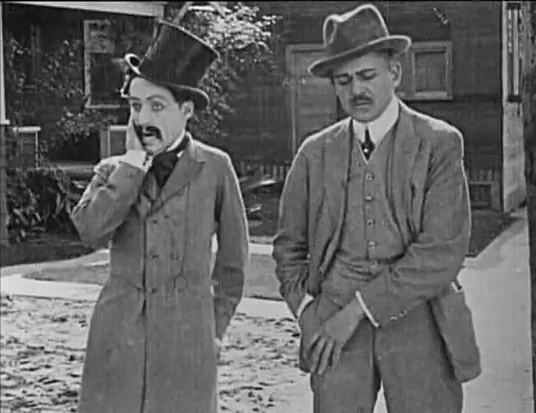 The Charlie Chaplin who appears in Making a Living is not in the tramp costume that would make him famous. In his first film Chaplin is dressed in top hat, waistcoat and cravat, with a monocle and sporting a long drooping moustache. His character is a seedy chancer who tries to steal the girl and then the job of a rival. There are some small bits of adroit comic business that show Chaplin's potential, but in general the film was a run-of-the-mill Keystone slapstick comedy, made quickly and cheaply, with a star who knew nothing as yet of how films were made. Chaplin disliked the film, and disliked Lehrman directing him. He was puzzled by the filmmaking process (he did not understand why films were shot out of sequence), but rapidly learned the business and took over the direction of his own films within months.

Surviving copies of Making a Living lack the original descriptive intertitles. The main title and music  on this Internet Archive copy are later additions.

Making a Living is worth a second glance, however. It is not nearly as bad a comedy as Chaplin held it to be, but what makes it of interest for this blog is that it is a film with a newspaper setting. Chaplin's rival (played by Lehrman) applies to be a reporter. Chaplin's character joins him in the profession (he spots a handy 'Reporter Wanted' sign) and does his best to scoop his rival. In what feels like a remarkably modern plot development, there is a car crash in which Lehrman photographs the car and interviews the victim trapped beneath while doing nothing to rescue him, before an equally cynical Chaplin steals his camera to claim the scoop as his own. It all ends, inevitably in a crazy chase, with the two rivals eventually scooped up by a cow-catcher on the front of a passing tram. 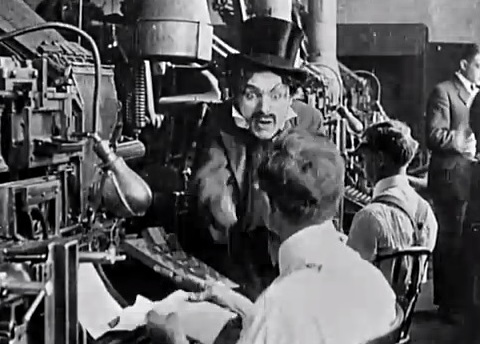 The film has several shots of a row of newspaper Linotype operators at work, and shows bundles of newspapers being thrown out into the street for distribution by news boys on bicycles. According to Glenn Mitchell, in The Chaplin Encyclopedia, the newspaper featured is believed to be the Los Angeles Times, and a sign in the background towards the end of the film which reads 'Largest City Circulation' suggests that it is the paper in question. 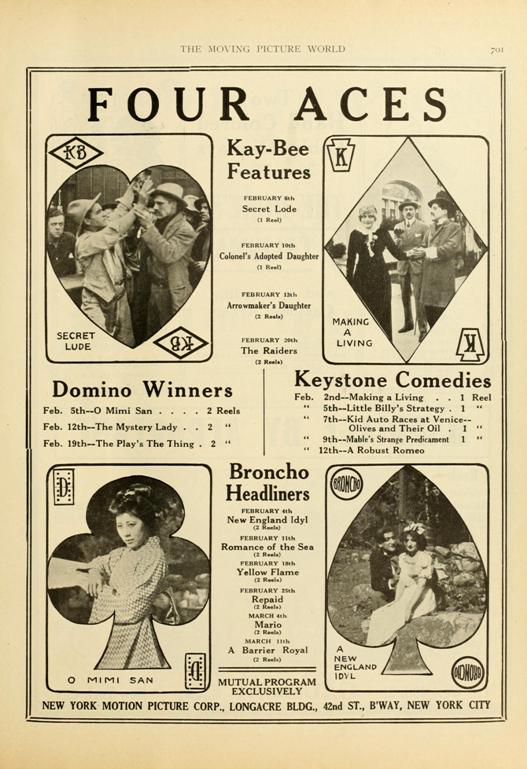 The world took a little while to notice Chaplin. There are listings for Making a Living and other early Chaplin releases in the film journals of the period, several of which can be traced through the excellent free resource, the Media History Digital Library. The Moving Picture World was prescient in declaring Chaplin from his debut to be to be "a comedian of the first water", but in general it was only a few months later that the first notices of praise can be found. In those British newspapers on the British Newspaper Archive, the earliest to note Chaplin by name would appear to be the Manchester Evening News on 6 June 1914, which reminds British audiences that they previously would have seen Chaplin on stage performing with Fred Karno's troupe, and how his films were going to be as popular as those of 'Bunny' (John Bunny, the most popular film comedian before Chaplin, now almost completely forgotten). 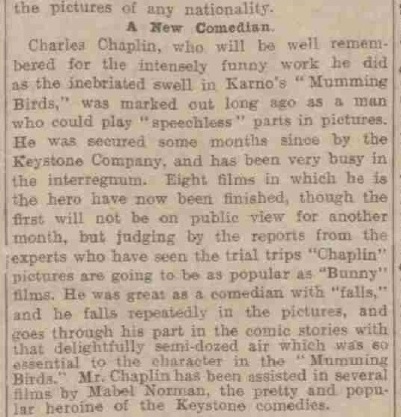 Making a Living was not the first newspaper movie. As early as 1900 the American Mutoscope and Biograph Company made the comic sketch Horsewhipping an Editor, in which a man attack an editor for reasons unexplained, and there were at least half a dozen short comedies and dramas made about newspaper reporters, as well as some actualities showing newspaper production, that were produced before Chaplin's debut film. In Essanay's Tapped Wires (USA 1913), for instance, rival news agencies tried to scoop one another with photographs of a train wreck, a scenario not dissimilar to Making a Living, only played as drama not for laughs (the film is believed lost). 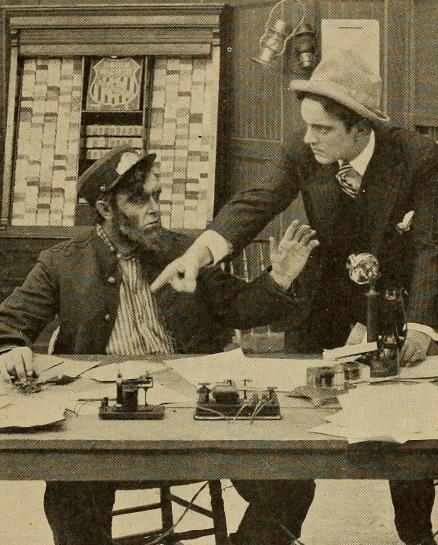 Other  early newspaper films included Dan Leno and Herbert Campbell Edit 'The Sun' (UK 1902), Seymour Hicks Edits 'The Tatler' (UK 1907), Cretinetti re dei giornalisti (Italy 1910, a film which survives), Gallegher: A Newspaper Story (USA 1910), The Reform Candidate (USA 1911), The Grafters (USA 1913), The Reporter's Scoop (USA 1913),  A Newsboy's Christmas Dream (UK 1913) and Her Big Story (USA 1913). Reporters would either be portrayed as daredevil characters questing after the truth (The Reform Candidate and Her Big Story both featured women reporters exposing corruption) or a hapless comic figure overhelmed by events. Playing a reporter was standard comic guise for European film comedians such as Robinet (Marcel Fabre), Cretinetti (André Deed) and Tontolini (Ferdinando Guillaume), and Chaplin's first role fits into this comic tradition.

There were early actuality films about newspaper production too. The Seymour Hicks film mentioned above was an 'industrial' film (a film showing an industrial process of some kind) with interventions from the comic actor. The Making of a Modern Newspaper (USA 1907), a copy of which survives, shows the Philadelphia Record being produced. Other newspaper actualities (probably all now lost) included Delivering Newspapers (USA 1903), Newspaper Making (UK 1904), Making of a Modern Newspaper (UK 1908), The Newspaper World from Within (UK 1909, on the production of the Morning Leader), The Dundee Courier (UK 1911, sponsored by D.C. Thomson), and The Production of a Newspaper (UK 1913). British film companies of the period were clearly keen on filming newspapers (or the newspapers were keen to have their product promoted in the cinemas).

Soon after Making a Living was produced, Chaplin made another film, Mabel's Strange Predicament (Mabel being Mabel Normand). It was for this film that he decided to pick out a hat, shabby suit, cane, donned a toothbrush moustache, and magically a character was born - the little tramp. However, the first time audiences saw the costume was in Kid Auto Races in Venice Cal., made after the Mabel film but released in America as Chaplin's second film just five days after Making a Living, on 7 February 1914 (it too has a news theme, as the children's soap-box derby that Chaplin's character interrupts is being filmed by the newsreels, which he spoils by standing in front of the camera). The look, the gestures, the individuality, the iconic representation of the down-at-heel little Everyman with only his wit to save him from a harsh world, were all in place. His future encounters with newspapers would be as an object of fascination, as he swiftly became the most famous person in the world. 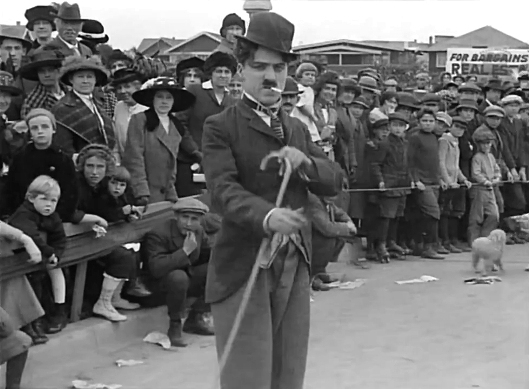 Posted by Luke McKernan at 9:13 AM

It's sad that in his recent biography of Laurence Olivier, distinguished author Philip Ziegler claimed in his chronicling of events occurring in 1907, the year of his subject's birth, that Chaplin made his first `short film' in 1907. Seven years before his first Keystone one-reeler!This major error cannot help the credibility of accuracy by such a well-known author and, unfortunately, BBC Radio 4's adaptation repeated it .Thus are such blunders due to negligence transformed into `facts' for future generations!
To quote Orson Welles: `In the depths of their ignorance'...