Before & After - Kiev's Independence Square: A stunning composite image published on Reddit.

You're not going to read this: But you'll probably share it anyway. The Verge points out the huge difference in numbers between what we tweet and what we actually read of what we tweet.

Scientists develop a lie detector for tweets: More on the shakiness of social media, this time on a system - Pheme - which could help determine whether a Tweet contains credible information or not. From the Daily Telegraph.

The Historian and the Home Movie: A nice 5-part set of thoughtful blogs from the Media Archive of Central England on why home movies matter as history. Part 1, Part 2, Part 3, Part 4, Part 5.

The YouTube War: A fine piece by Amnesty International's Christoph Koettl for PBS on the rise of YouTube videos in reporting on the Syrian conflict, and the opportunities and challenges of using such videos as evidence of human rights violations.

Letter asks for release of Peter Greste held in Egypt: The BBC, ITN, Reuters, Sky, NBC News and ABC News have signed a letter asking for the release of Australian freelance journalist Peter Greste and his two Al-Jazeera colleagues, being held in prison by the Egyptian authorities.

Hacked Off to Daily Mail: you are the biggest ethical code offender: The Press Complaints Commission published a list of publications responsible for breaches of the editors' code of practice. The Daily Mail came top. The Mail protested and defended its position. Hacked Off was not impressed. Roy Greenslade refrains from comment.

Anti-“Daily Mail” Signs Appear On Britain’s Rail Network: Talking of which, these signs have been popping up on UK trains (having been handed out by satirical comedian Mark Thomas on his current tour). Buzzfeed dutifully collates a selection of photographs. 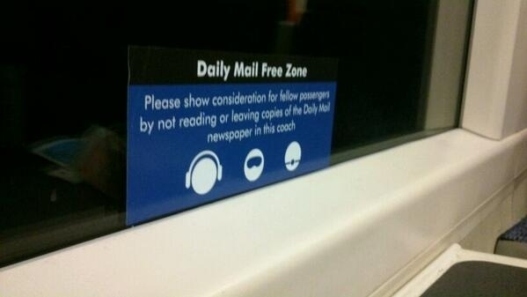 On the Ramsgate to Victoria line, photographed by Nicola Branch

How digital weighs up against print for UK magazine circulations: Journalism.co.uk reports on the new data from the Audit Bureau of Circulation which for the first time gives combined digital and print sales for magazines. Print still dominates, for now.

BBC accused of political bias - on the right, not the left: The Independent reports on Cardiff University research which finds that "the BBC has compromised its impartiality by depending too heavily on sources from business, the media, law and order and politics" and that the BBC "was more likely than ITV or Channel 4 to use sources from the right – such as US Republicans or Ukip politicians – than from the left (US Democrats or Green politicians)."

Should UK licence-fee payers still fund the World Service?: More BBC worries - The Observer is concerned that the end of Foreign Office funding for the World Service could put the service in jeopardy when the next round of cuts is made.

Readers love Johnston weekly’s UGC: Can a regional newspaper find 75% of its copy from user-generated content, and thrive? Steve Dyson reviews the Pocklington Post for Hold the Front Page and emerges pleasantly surprised by what he reads. "The resulting copy may be a little loose in style, but there seems to me to be finer detail, more names and probably fewer factual errors".

Are quizzes the new lists?: More to the point, are quizzes journalism? Caroline O'Donovan looks at the latest Buzzfeed viral phenomenon.

The case of the poisonous Bath buns: Michelle Higgs' discovery of a shocking tale from Victorian times found when using the British Newspaper Archive.

WikiLeaks now offers a search engine to help you find documents linked to any keyword: And here it is.