Checking out the NSB

The NSB, or Newspaper Storage Building, is the British Library's new home for newspapers. Situated at our second site in Boston Spa, Yorkshire, it is not where users will be able to read our print newspapers - that will be in the Newsroom at St Pancras, when they become available once more in Autumn 2014 - but it is where they are starting to be stored, in optimum preservation conditions. 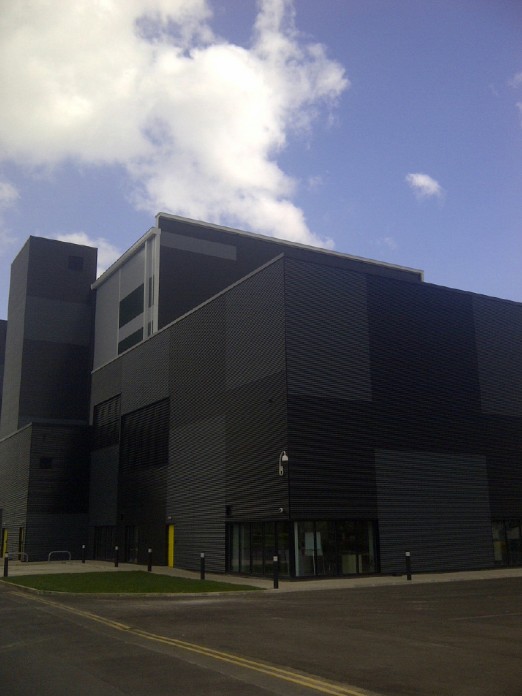 The urgent need for moving the newspaper collection from its former North London home in Colindale to the NSB is made clear in a recent blog post by Sandy Ryan of our Collection Care team.

It simply wasn't possible for us to continue with a third of the collection in an unstable condition and nearly 15% of it actually unusable. So it was that, thanks to £33M of government funding, we embarked on our Newspaper Programme, which has seen the closing down of the Newspaper Library at Colindale, the building on the NSB with the ongoing transfer of the newspaper collection to the new facility, the planned digitisation of 40 million newspaper pages through the British Newspaper Archive, and the opening of the Newsroom at our St Pancras site next month.

I visited the NSB for the first time last week. It is, to be honest, a large black lump - a Vogon spaceship of a building, landed in the middle of the Yorkshire countryside. But what it lacks in beauty on the outside it more than gains in purpose on the inside. It is essential for the long-term preservation of the print newspapers that they be kept optimum temperature and humidity-controlled conditions, and in the dark. Inside the NSB the temperature is being maintained at 14⁰C,  with relative humidity at 55%, and the oxygen level 14-15%, eliminating any risk of fire. So it is great for newspapers, but not so great for humans. Instead the process of ingest, shelving and retrievable is all undertaken by fully-automated machinery - appropriately robotic for a spaceship. 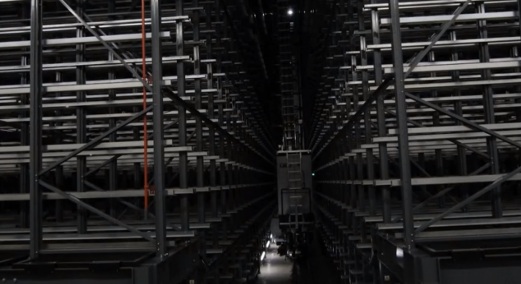 Looking up from the inside of the NSB as one of the cranes descends, from BBC News

Disappointingly it means that visitors can't see inside the main storage area (there is no viewing gallery), but you can see what it looks like from this recent BBC News video, which also shows the conditions at Colindale - the contrast is dramatic. A push of a button from St Pancras will send a message to the Boston Spa robots to select the requested newspaper volume from its rack, carry it to the outside, and have it delivered to St Pancras within 48 hours.

Such a process requires more than robots - it requires minute attention to data. Every volume in the collection has been marked with a barcode, with these records matched to the appropriate catalogue record. This would have been a time-consuming but otherwise straightforward process were there a simple one-to-one relationship between catalogue and object, but sadly that is not the case. Many of the newspaper titles have been bound alongside other titles, and newspapers in case are full of cataloguing complexities because they have a tendency to change their titles or frequency of publication. This has meant a huge job of matching complex records to the complixities of how the newspapers have been bound or boxed, in a form that makes sense to an electronic catalogue and ordering system. 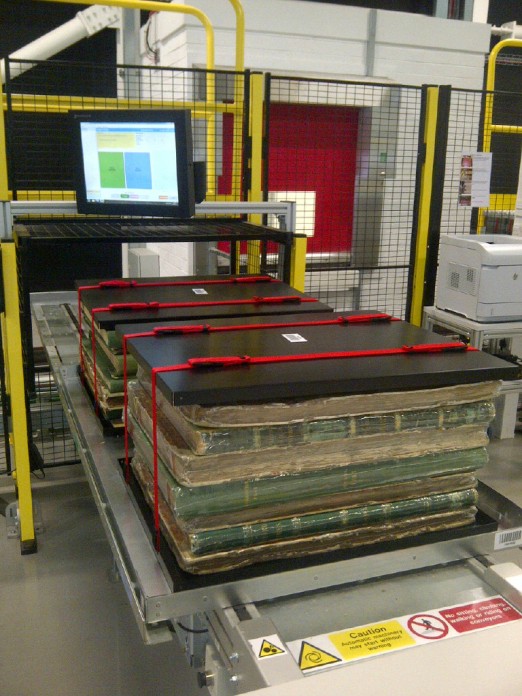 Stacks of newspaper volumes ready for ingest into the NSB

You can see the results of this in operation at the one part of the NSB that it open to visitors, the ingest area i.e. where the newspapers are delivered into the NSB. Each shrink-wrapped newspaper volume has its barcode, which is checked against the NSB's management system. Each pile of newspaper volumes, as shown in the photograph above, is also barcoded, because the stack of volumes then has to find its place within the NSB. Each stack - which is a maximum 400mm high - has a top and bottom board with straps tightly-secured about them (a task performed by actual humans). Only when every volume that should be there has been checked to form a complete stack, and the barcode for stack itself swiped and checked, can the complete set be whisked away on a conveyor belt, through an air lock, and off to its alloted rack within the darkened vastiness of the NSB. 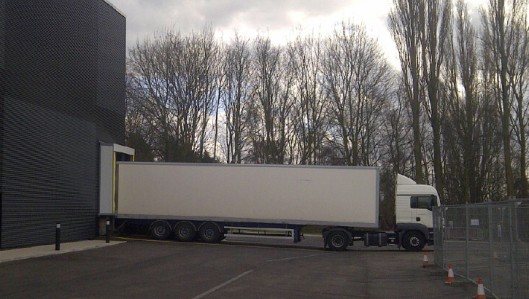 Another delivery arrives from Colindale

All of this is currently going through a testing process, as we try to anticipate all of the different kinds of order enquries that will be made, how they are identified, retrieved and delivered, while making sure that nothing gets lost or damaged along the way. Meanwhile the newspapers are now being delivered from Colindale to the NSB, a few lorries-worth at a time so far, but soon to be three lorries per day, every day, up to Autumn 2014 when every newspaper volume (c.280,000 of them) will be in place and the full print newspaper delivery service can be put into action.

The Newsroom opens on 7 April, when there will be no print newspapers available to begin with. The service we'll be providing between then and Autumn 2014 will be microfilm and digital copies only. As a third of the collection is accessible in microfilm form, we will be able to satisfy a great many research enquiries as things are, and in an ideal operational world we would want to deliver 100% microfilm and digital access, and never have to move the newspapers again. The NSB has been designed for their long-term preservation, so that our news heritage is safe for many generations to come.

The NSB has excited a lot of interest for its automated storage systems, but what intrigues me from the curatorial point of view is that relationship between the object and its description. Our analogue heritage fits clumsily into the digital age. We have bound newspapers into volumes for the convenience of storing them on shelves, but what was convenient for finding newspapers by humans able to walk up and down those shelves is not so convenient when we need to understand newspapers as they were issued, which is by issue.

Our newspaper catalogue is at title-level; that is, we can tell you that we have The Times, and that for any particular date or time period for that newspaper we can direct you to the relevant volume. We can't point you directly to that individual instance of a newspaper, unless you use the British Newspaper Archive, where that 1% of our collection that has been digitised is discoverable by article, page, issue or title. That's what digital should give you - logical disaggregation of the object into an intelligent, reuseable, interoperable artefact. Newspapers can then be linked up with other newspapers, indeed other news forms such as television, radio, web or anything with a date to it.

We have more thinking to do about how best to make our newspapers available, and why.

Posted by Luke McKernan at 7:59 AM