Reading all about it

There are many books on news and current affairs, but most are aimed at an academic or professional audiences. There has been a notable lack in the past few years of books aimed at a general readership on news and news history. Recently, however, three significant titles have appeared which each touch on the fundamental role news plays in society. Each is highly readable, and each is a reflection of the current turmoil in news production worldwide. 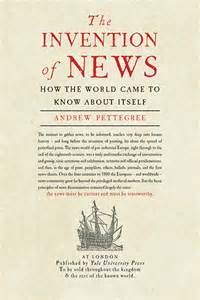 Andrew Pettegree's The Invention of News: How the World Came to Know About Itself (Yale University Press, 2014) is a history of how the thirst for news developed and was commercialised from 1400 to 1800. It shows how in the pre-industrial era news was shared orally, then through handwritten texts delivered by messengers in the service of church, state or business, then how it was radically transformed in its audience, content and impact through the introduction of print, starting with news-sheets before gradually evolving into the newspaper form that remains with us today.

What is paticularly refreshing about this history is its focus on those for whom the news was produced. News histories have a tendency to take the consumers of that news for granted. Here there is a vivid understanding of who wanted news, the ways in which they were prepared to pay for it, the degree of trust they placed in it, and how their world was changed by exposure to news. The background to this is clearly laid out, so one sees a modern Europe emerging, bound together by networks of information and with a public that gained greater power the more it became informed of the world about it. News is both a by-product of, and the catalyst for profound changes in society. 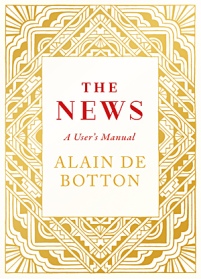 Alain de Botton's The News: A User's Manual (Hamish Hamilton, 2014) is the popular philosopher's attempt to question why we have the news that we do have, and what impact it has upon society. It is quite unlike the usual books on news or current affairs, in its elegant design quite as in its approach. De Botton's critique of news as presently constituted, and how it fails to find space for consideration of underlying causes or a more positive view of human activity, has been greeted with much scorn among news professionals and academics, not least for this lyrical call for a different definition of news:

"It is also the cloud floating right now unattended over the church spire, the gentle thought in the doctor's mind as he approaches the patient's bare arm with a needle, the field mice by the hedgerow,  the small child tapping on the surface of a newly hard-boiled egg while her mother looks on lovingly, the nuclear submarine patrolling the maritime borders with efficiency and courage..."

De Botton's call for a different kind of news is likely to find greater favour among some readers and viewers of news who are repelled, distressed or even simply bored by the common round of news stories. In doing so he may be tapping into a reluctance to engage with the news that has more to do with world-weariness and angst, a wish that the world were other than it is. He wants a form of news that will help make us better people, which is a dubious  - not to say improbable - goal. His understanding of news itself is unclear, sometimes seeming to be triggered by newspaper headlines, sometimes by TV news highlights, sometimes by web news sites, but with criticisms directed hapazardly at all three. Many news services are very good at providing the background context that he craves, and the diversity of news stories that he would like to see already exists: it just requires an active engagement with the different news sources available. But if news services end up serving themselves more than they serve their audiences, then there is a case to be answered. 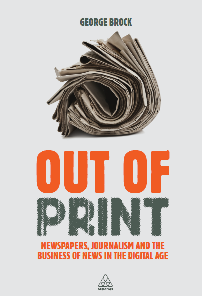 Our third title, George Brock's Out of Print: Newspapers, Journalism and the Business of News in the Digital Age (Kogan Page, 2013) is written by a former journalist turned journalism professor, but it is written in a very accessible way that should appeal equally to a public readership as to the student. It certainly touches on themes that are relevant to all of us. This is a guidebook for the world of news as we now have it, and for what it may be turning into.

As all will be aware, newspapers face an uncertain future, as the internet and digital technologies have completely overturned how news is distributed and consumed. This demands a complete rethink on what journalism is, what value it holds, and how it can be maintained. Brock provides a handy historical summary of news production in Britain from the Middle Ages to the present day, then introduces the reader to a clear and stimulating overview of the new world of social media, citizen journalism, news aggregators, pay walls, and information overload.

We have no inalienable right to good journalism. As Brock observes, in his introduction: "Journalists in the 21st century rarely stop to recall that 'mainstream' journalism has only been a short period in the history of public information. The supply of information to democratic societies only matured as a mass-market industry in the 20th century, allowing journalism to be practiced and controlled in more concentrated and organized ways. Journalism of an earlier era was smaller scale, more intimate, opinionated and much of it resembled the social networks now carried out by the internet."

Is news production as we have understood it, as something composed by journalists and transmitted by news organisations, only a phase in how public information is communicated? What connection is there between the world of the Internet and the social networks of earlier centuries that Andrew Pettegree describes? Do news organisations ignore the troubled thoughts about engagement with the news as we now have it that Alain de Botton identifies, or have they discovered the key to their future in socially-driven news aimed at young audiences, as exemplified by such vogue-ish services as Buzzfeed, Upworthy, Now this News and Reddit? If the latter, then who generates the news that gets shared, and if we want journalists to do so, then who will pay for them if the advertising revenues fall and too many expect to find their news for free?

The answers - whatever they may be - lie in best understanding our enduring "hunger for information" (in Andrew Pettegree's phrase), something that all three books address in different, but complementary ways. There is no more important debate than the one we are now having about news. It is what binds us together.

Posted by Luke McKernan at 9:05 PM