The Newsroom: Well of course we have to start with our own big news, which is that the Newsroom - the British Library's news reading room for news - opens at St Pancras on Monday 7 April. Is this first library space ever to be named after a blog...?

Named Entity Recognition for newspapers: Not the most exciting title for a blog post, but something worth reading closely by anyone interested in the future of digitised newspaper research. Europeana Newspapers explains how key terms can be extracted from newspaper text to enhance search and improve linkage of data.

News Archive Connected Studio: Build Studio: Keep an eye on what Peter Rippon and his team at the BBC are doing in planning how to open up their news archives. Much audience testing is coming first.

Why Twitter will never be a news organization: An interesting interview in Time with Twitter's Head of News, Vivian Schiller. "The Twitter news team is never going to pick and choose news stories, pick and choose winners. That’s not our job at all. But what we need to do is ... to make it easier for news organizations but also for our consumers to find what they’re looking for."

Why Twitter can't keep crashing: Mat Honan at Wired says that Twitter has become too important to how the world gains its news to have the crashes that it not infrequently does have. "It is the definition of breaking news. Twitter is increasingly the key place where information is born – stuff that maybe starts with one person but is important to the whole world."

Strictly algorithm: Really interesting article by Stuart Dredge at The Guardian on how the news we wants find us - through algorithms - and what this means for news, journalism and democracy.

Thomas Jewell Bennett: an early supporter of Indian Home Rule: Pat Farrington writes for the British Library's Untold Lives blog on her great-uncle, editor of the Times of India, some of whose letters are held here.

Russia’s information warriors are on the march – we must respond: Anne Applebaum at the Telegraph sets out to sort out the truth from lies in the Russian media's reporting of the crisis in Ukraine. 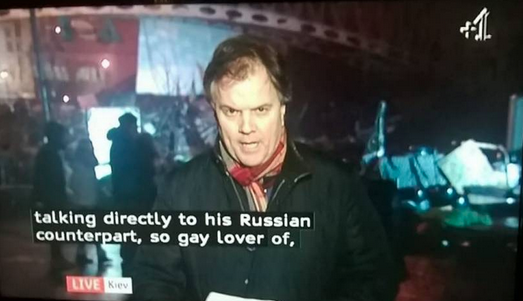 Ah, sweet irony: For afficianados of errors in TV subtitles, much joy was brought about by this misinterpretation of Matt Frei talking about Russian Foreign Minister Sergey Lavrov on Channel 4 News.

Fleet Street editors of the past were little different from those of today: Talking of which, Roy Greenslade reviews Dennis Griffiths' Blum & Taff: A tale of two editors, on R.D. Blumenfeld and H.A. Gwynne, Fleet Street greats from another age.

Why venture capitalists are suddenly investing in news: Adrienne LaFrance at Quartz looks at why the investment money is pouring into the new kids on the news block: Buzzfeed, Upworthy, Vice etc. As one interviewee puts it: "“They are all technology companies first ... They understand how people utilize technology and how to present and create content."

Journalism startups aren't a revolution if they're filled with all these white men: Emily Bell looks at the somewhat familiar make-up of some supposedly cutting edge news start-ups.

Robot reporters and the age of drone journalism: And finally, look out for Emily Bell's lecture on how new technogies are driving the future of journalism, at the British Library on 25 April.

Posted by Luke McKernan at 8:07 AM