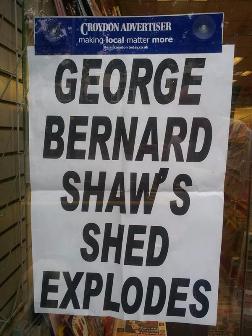 From The Poke via @jameshoggarth

45 local news stories that rocked the world: It started with Patrick Smith at Buzzfeed - now headlines from UK regional newspapers are fast becoming an Internet cult. The Poke collect 45 that show just why we love local newspapers so.

Against beautiful journalism: Thought-provoking article from Felix Salmon at the Reuter blog, who argues against the over-designed nature of some (mostly American) news sites. "Today, when you read a story at the New Republic, or Medium, or any of a thousand other sites, it looks great; every story looks great. Even something as simple as a competition announcement comes with a full-page header and whiz-bang scrollkit graphics. The result is a cognitive disconnect..."

How 3 publishers are innovating with online video: Journalism.co.uk looks at how Huffington Post, the Washington Post and BuzzFeed are taking different approaches to using video, as discussed at the FT Digital Media conference.

Harry Chapman Pincher: Perhaps the best-named journalist ever, certainly one of the most famous living British journalists, Chapman Pincher has turned 100 years old and is still writing. Nick Higham at BBC News profiles the man who became legendary for his espionage scoops.

Safeguarding the “first rough draft of history”: How pleasant to have a history of newspapers (with thank yous to the British Library for its newspaper preservation work from Sylvia Morris at the excellent Shakespeare Blog.

In praise of the almost-journalists: A fine piece by Dan Gillmor at Slate on the distinctive contribution to online news made by advocacy organisations such as Human Rights Watch and Cato Institute.

News Corp boss brands Washington Post journalists 'high priests': Not such good times for journalists of the old school. The Guardian reports how News Corp's Chief Executive Robert Thomson feels that the Washington Post's journalists have failed to embrace the transition to digital.

Apple Adds Talk Radio And News To iTunes Radio Starting With NPR: iTunes Radio gets its first non-music offering with this team up with NPR (National Public Radio), Techcrunch reports.

The Evolution of Automated Breaking News Stories: Is this the future of news? Technology Review reports on how a Google engineer has developed an algorithm, Wikipedia Live Monitor, that spots breaking news stories on the Web and illustrates them with pictures. Now it is tweeting them.

Debugging the backlash to data journalism: Data journalism has been all the rage, so inevitably there has been a backlash. Alexander Howard at Tow Center provides a good overview of the phenomenon, its strengths and its limitations.

Taming the news beast: The Newsroom blog goes to an International Society for Knowledge Orgaization event on news archives and news metadata, and comes back thoughtful.

The Guardian crowned newspaper of the year at Press Awards for government surveillance reports: Press Gazette names all the winners at the Press Awards. Meanwhile, former Guardian columnist Glenn Greenwald has won the University of Georgia's McGill Medal for Journalistic Courage.

Posted by Luke McKernan at 7:52 AM