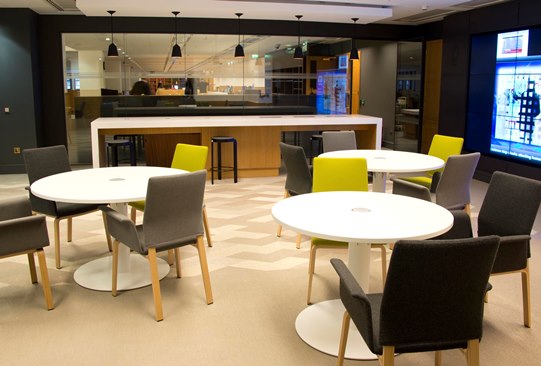 Opening day: So of course the British Library tops the week's news about news with the opening on April 7th of the Newsroom, its new reading room for news. Newspapers, television news, radio news and web news can now all be found in the one physical space - though for newspapers that means microfilm and digital for now, until the print papers become available again in the autumn. It all looks very beautiful - and has a lot more people in it than in this photo taken just before it opened.

Shift 2014: It's all been happening here this week, with Newsworks, the marketing body for UK national newspapers, holding its Shift 2014 conference at the British Library. The live blog of the event includes reactions to star turns such as the editors of The Guardian (Alan Rusbridger), The Independent (Amol Rajan) and The Telegraph (Jason Seiken) and Sir Martin Sorrell, chief executive of WPP. Jason Seiken's speech is here.

Here & Then: And there's more. The British Newspaper Archive, which provides digitised copies of British Library newspapers online, has issued a free iPhone app, Here & Then, with articles, images and adverts from the collection. Oh, and 135,000 pages were added to the BNA site in March.

What will yesterday’s news look like tomorrow?: Article of the week, by a mile. Adrienne LaFrance at Medium looks at the future of news archives, which focus on how they are catalogued and their data mapped for rediscovery in the future. "News organizations need to design archives that better mirror the experience of consuming news in real time, and reflect the idea that the fundamental nature of a story is ongoing".

News is still a man's world: A City University study reveals that male experts still outnumber female experts by a ratio of four to one on flagship radio and TV news programmes.

Has Thompson at the NYT given newspapers a new way to pull in extra cash and readers?: Mark Thompson, former BBC DG and now heading the New York Times, may have had a big idea - New York Times Premier, an added subscription to the online version of the newspaper, with additional content, offers (two free ebooks a month), even special crosswords. The Drum speculates.

Upvoting the news: long, engrossing article by Alex Leavitt for Medium on how news spreads across social media channels, with particular emphasis on Reddit.

A sample 'card' from Vox.com

Three good things about Ezra Klein’s new site Vox, plus three challenges that it faces: The much-hyped Vox.com site, with celebrity news blogger Ezra Klein, launched on April 6th. Mathew Ingram at Gigaom says what he likes (especially the user-friendly 'cards' with background information to stories) then wonders how it will thrive.

'Video-checking' the Clegg and Farage debate: Fact-checking videos - where videos of speeches are analysed to see whether or not the statements made stand up - have been popularised by The Washington Post's Truth Teller. Now the fact-checking organisation Full Fact have done the same for LBC's Nick Clegg v Nigel Farage debate.

Peaches Geldof – was the coverage by newspapers, and TV, over the top?: Roy Greenslade ponders on what would have been proptionate news coverage for the sad death of Peaches Geldof.

More UGC, fewer photographers – and no paywalls:  Editors set out visions of future: Hold the Front Page reports on the Society of Editors Regional Conference, where likely changes to the regional newspaper world were set out: user-generated content, smaller offices, cover price rises,  no staff photographers, and no paywalls.

One easy, transparent way of making accuracy visible: open sourcing: George Brock argues that the way for news providers to build up trust is through links to source material - footnotes, sort of, though he prefers the term open sourcing.

How some journalists are using anonymous secret-sharing apps: Using apps like Whisper and Secret to turn rumour into news.

We need to talk: Raju Narisetti, senior vice president of strategy at News Corp, poses 26 questions to ask news organisations about the move to digital. Fascinating insight into a business in transition.

Posted by Luke McKernan at 8:57 AM