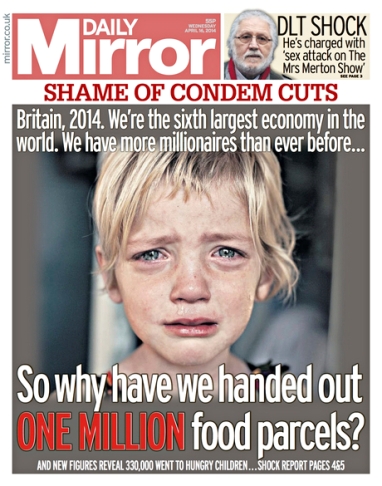 The Mirror’s Crying Child Photo – Not All That it Seems: Ethical conumdrum and news image of the week was the Daily Mirror's hotly debated selection of an image of a crying child for a front page story on food parcels in Britain.  Blogger Dan Barker points out that the children isn't hungry (she was crying over an earthworm), she's American, and it was taken in 2009.

Pulitzer Prizes Awarded for Coverage of N.S.A. Secrets and Boston Bombing: Some would imprison them; others hand them garlands - The Washington Post and The Guardian have been awarded the Pulitzer Prize for public service for their reports based on the National Security Agency documents leaked by Edward Snowden. The Boston Globe won the breaking news prize for coverage of the Boston Marathon bombing, a year ago this week.

To the Snowden story system a crowning Pulitzer might have gone: No prizes should be awarded for the grammar in the title of Jay Rosen's article for his PressThink blog, but he argues that how the Snowden story was developed and shared internationally, outflanking national attempts to prevents its publication, is what merits a Pulitzer prize.

Tusrkey is a case study in the value of citizen journalists, thanks to the ones behind @140journos: Fascinating account by Mathew Ingram on how journalists use social media  in some countries when the traditional news media are perceieved to have failed - here the example of a citizien journalism initative in Turkey, crowdsourcing verification of poll results.

Appeals court says blogs are not only media, they're an important source of news and commentary: Mathew Ingram again, on the implications of a legal decision from a Florida court case on the status of blogs in a defamation case.

Digital journalism: we're still waiting for the third model of news publishing: Emily Bell asks what the recent launches in America of news sites such as Vox.com and the FiveThirtyEight mean for the development of the news media.

Vox.com 's Melissa Bell: 'This is a chance to do journalism differently': Talking of which, Vox's co-founder Melissa Bell explains what the sites aims are, and what explanatory news (its special selling point) aims to achieve.

The IMPRESS Project's plans for press regulation: Journalism.co.uk reports on a crowdfunding initative to create a regulator for small regional and hyperlocal publishers.

Pathe Gazette's report on the evacuation from Dunkirk (1940), filmed by Charles Martin

British Pathé releases 85,000 film on YouTube: The British Pathé newsreel has released its entire archive of 3,500 hours of newsfilms 1896-1970 on YouTube. The films have all been available on the site www.britishpathe.com for twelve years, but this bold gesture should greatly increase their reach and profile.

A ... is for Advertising: The Newsroom blog gets its scond contributor, Jaimee McRoberts from the British Library's newspaper reference team, who kicks off an A-Z series on newspapers with Advertising.

The only way is ethics: Will Gore at The Independent is very interesting on the reporting of the Oscar Pistorious trial by the South African media, with its more permissive approach to what gets reported - and the different news imperatives between print and web news outlets.

... a visual history of violence in Venezuela; the relationship between Venezuela and Columbia in the trafficking of cocaine; analysis of various epidemics and outbreaks; live-tracking of how long ships sit in ports waiting to be unloaded of much-needed staples like sugar; an investigation into the paper shortage facing newspapers; a Twitter analysis of candidates in a recent election; and deep search into the network behind several Venezuelans who were charged in the U.S. for finance-related crimes, which was not well reported in Venezuela itself.

Pickles pursues the wrong policy as people reject local newspapers: Thought-provoking piece from Roy Greenslade on the closure of a local paper (the Fulham & Hammersmith Chronicle), the supposed competition from the local council's free paper, and how demographics are as much of a theatre to local newspapers as rival news sources.

BBC is the most-shared news brand on Twitter: 96 million unique users in March 2014;  user figures up 26 per cent on the monthly average of 76 million; news stories shared 2.71 million times across the month on Twitter - the BBC website marches on, having celebrated its 20th anniversary last week. The Drum reports.

A print newspaper generated by robots: The Guardian has been experimenting with a limited edition printed newspaper - called #Open001 - that is produced by algorithms based on social-sharing activity. So the robots are gathering the stories, not writing them. Yet.

Well, this is hawkward: Hmm, how good are robots at spotting humour? Press Gazette gleefully reports how The Guardian was fooled by a Vatican April Fool's Day story (about hiring a hawk to protect the Pope's doves).

Posted by Luke McKernan at 9:57 AM