Local papers are far more than their weird and wonderful slow news day stories – an aspect often derided in the media, as demonstrated by a marvellous April Fool’s Day joke from the Harrogate Advertiser (seen here in the Wetherby News) which managed to convince even the hardiest of journalists that a lost hat was in fact breaking news! In actuality, they contain some exceptionally influential editorial campaigns that help the communities they support, for example: keeping museums from closure; raising money for people in need of  medical treatment; and raising awareness of important issues, such as  poverty. 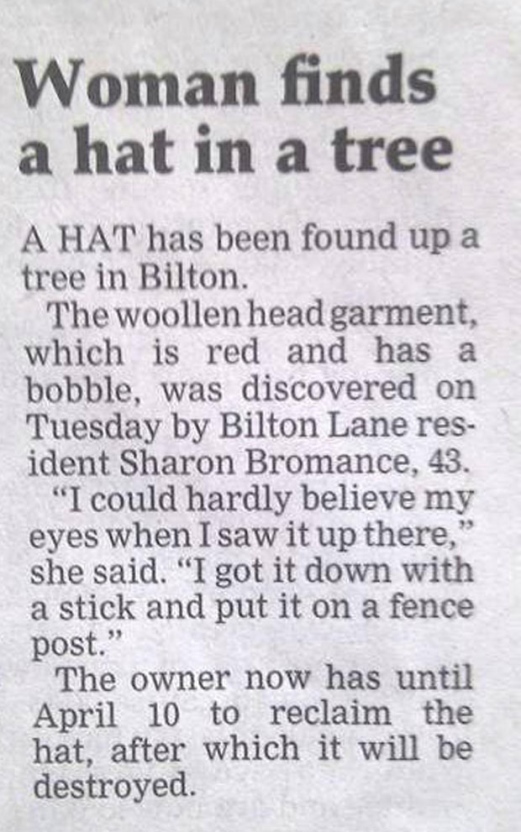 Regional press evolved in tandem with the national papers, the first known example is purported to be the Norwich Post, established in 1701 by the printer Francis Burges. By 1805, there were more than 100 provincial papers in production throughout England, and many towns had more than one title to compete for readership. Despite their contents generally being little more than a cut and paste version of the national news, rivalry was rife – the York Gazetteer was founded “to correct the weekly poison of the York Courant” (Black 1992: 13 in The Encyclopedia of the British Press)!

The foundation of the Press Association in 1868 enabled regional papers to gather news via an annual subscription, likewise, the supply of telegrams from Reuters was only 1 pound per week, enabling the provincial papers to fill their columns with important news. Local papers were, originally, local in almost every aspect: owned, produced and read around their communities in addition to covering stories of regional interest. They also presented the news through the eyes of the community, concentrating on important local issues, “letters to the editor” and human interest stories. The below poem from the Newcastle Courant (British Newspaper Archive: 18 February 1876) explains what a [local] newspaper ought to be: reading matter suitable for “all classes of the community”. 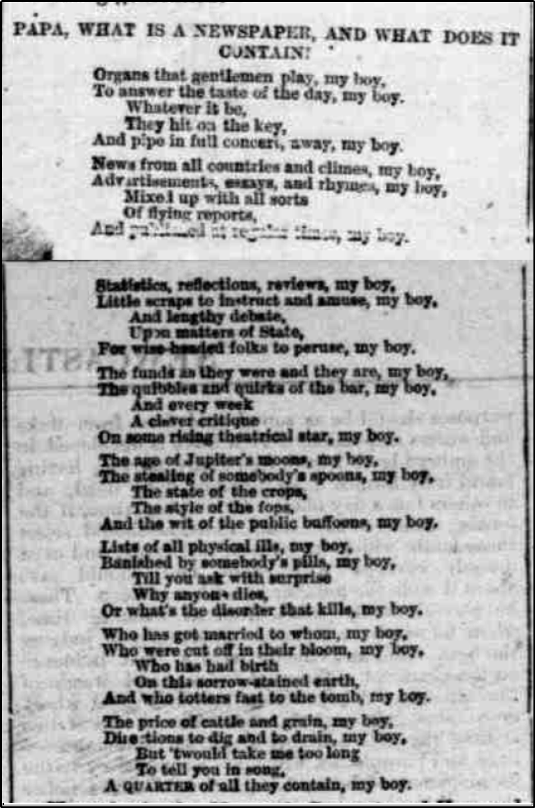 Papa, what is a newspaper, and what does it contain? Newcastle Courant 18 February 1876.
Image © D.C.Thomson & Co. Ltd. Image created courtesy of THE BRITISH LIBRARY BOARD.

Local papers are a far cry from merely containing pieces of fluff or absurdity – compare the following two pieces from Bradford’s Telegraph and Argus: Wedding brawl - over a pork pie and Stop the cut - save our national media museum.

Scholarly research frequently emphasises the declining number of local newspapers, their loss of readership and the subsequent ending of long-running papers such as the Liverpool Post (1855 – 2013); the catalyst being that regional papers are now local in name only (Franklin 2006: xxi). Such papers are now owned by monopoly newspaper groups and often based outside their town centres, potentially causing the newspapers to lose touch with the communities that they support.

Despite this decrease in the amount of regional papers produced, there are still 1,100 local newspapers and 1,700 associated websites in the UK that are read by 79 million unique users per month from all over the world (Newspaper Society 2014). Additionally, a new local paper, the Peckham Peculiar, was created in January 2014 !

Now that your curiosity has been piqued, here is a quick guide as to how you can view these regional gems yourselves.

The British Library provides access to the print (or microfilm-surrogate) copies of regional papers via the Legal Deposit Act –approximately 1,500  UK and Irish titles are collected per week. These can be ordered via Explore and viewed within the Newsroom. (Please bear in mind that hard copies will remain embargoed until the Colindale collection move has been completed in Autumn 2014.)

News websites with a .uk domain have been harvested since the 2013 Non-Print Legal Deposit Act, and again these can be accessed from the Reading Rooms.

Alternatively, researchers can access historical archives via our e-resources platforms available such as the British Newspaper Archive and NewsBank within the British Library Reading Rooms. These platforms offer the full-text search facilities, making the researching process a lot easier (though some have fallen foul to OCR software, so don’t be too disheartened if you can’t find your article the first time round. Readers are encouraged to submit their corrections to improve the service! We'll also be giving workshops on how to use these e-resources in the near future. Keep an eye out for more details here.)

Your local libraries and archives may also have their own collection of regional press available for viewing.

I'll leave you with a couple of my favourite historical articles from local press, courtesy of the British Newspaper Archive. You'll notice a theme of soldiers and ducks... 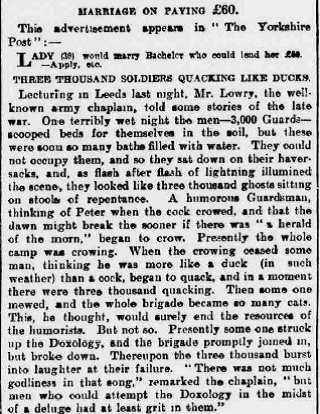 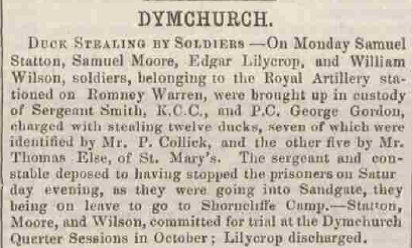