The New York Times KPI’s: In another piece on the NYT report, Frederic Filloux at Monday Note comes up with this thought-provoking quote: "In theory, the Times can get rid of print. Digital revenue far exceeds the cost of running the newsroom..."

The New York Times and innovation: are they asking the right question?: And there's more. George Brock points out that nowhere in the Innovation report does is say what journalism is, or that its authors graps that it is changing. He asks:

UK daily newspapers have doubled in price since 2004 and shrunk in size - no wonder sales are down: William Turvill at Press Gazette looks at the rise in cover prices for UK daily and Sunday national newspapers over the past ten years.

How Niuzly wants to put control into the hands of journalists: Journalism.co.uk reports on publishing platform Niuzly which  allows writers to sell their articles to readers on for individual micropayments.

Guardian launches redesigned app: The Guardian has issued a new version of its app, available across all Android and iOS phones and tablets running Android 4 and iOS 7, with increased personalisation features and incorporating the user-generated content platform GuardianWitness.

BBC issues new guidance for journalists on using Twitter: 'Don't do anything stupid': Sage advice after head of the BBC newsroom Mary Hockaday tweeted "#WhyImVotingUkip – to stand up for white, middle class, middle aged men w sexist/racist views, totally under represented in politics today", just ahead of the European elections. She subsequently took no part in the BBC's election coverage.

With Farage on the loose, broadcasters and newspapers must realise they are no longer king-makers: Reflecting on the results of said European elections in the UK, Ian Burrell at The Independent observes that the media's assumed power to influence voting (no UK national newspaper came out in support of UKIP) is waning. 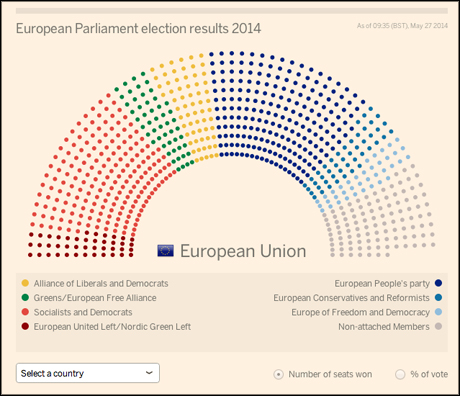 Metaio unveils Thermal Touch technology for making user interfaces out of thin air: Let's face it, we're all still hoping for our newspapers to become fabulously interactive. German company Metaio may have made a significant step towards this by developing its 'Thermal Touch' interface concept which could make any surface a use interface through a combination of thermal imaging and augmented reality. Applications they see for this include newspaper ads with clickable links. We'll just have to wait five years until they develop it.

Watch Skype translate a video conversation in real time: Another potentially transformative technology is speech-to-text (coverting audio files into printed words), which could have a huge impact on the use of audiovisual news archives. Microsoft are applying the technology - along with translation software - to Skype. Watch the video on the Quartz site and ponder the possibilities.

Royal privacy row as German tabloid publishes picture of the Duchess of Cambridge’s bare behind when her skirt blew up during Australia tour: Because it is news about news, we have to report the furore over the German magazine Bild's decision to publish a photograph of the Duchess of Cambridge's backside, and the decision by British newspapers not to do so. The Daily Mail report features a pixilated version of the image.

We're all aggregators now: Anyone can become a news publisher online simply by aggregating the news produced by others. Ann Friedman at Columbia Journalism Review comes up with three simple cardinal rules of being an ethical aggregator.

Preserving early periodicals and newspapers of Tamilnadu and Pondichery: The British Library's Endangered Archives Project has made 10,000 issues of rare periodicals from Tamilnadu & Pondicherry dating back to 1892 available online.

We just aggregated over 15.000 historical newspaper issues from Poland: More on digitised newspapers, which were already online but have now been incorporated in the Europeana portal. The Europeana Newspapers blog gives the background to these Polish additions.

John Humphrys offers advice to aspiring journalists: 'Don't do it': Today programme presenter John Humphrys tells Press Gazette he is advises not to go into journalism as a profession. "I am deeply pessimistic for the future of serious print journalism and I tell my own children and grandchildren to train for a profession where they're more likely to get a decent job with some hope of security". But Piers Morgan, Jon Snow, Ian Hislop, John Witherow and Kay Burley  and many others all disagree.

A journalist goes missing nearly every day in Ukraine: The week's most sobering news media statistic, from The Independent.