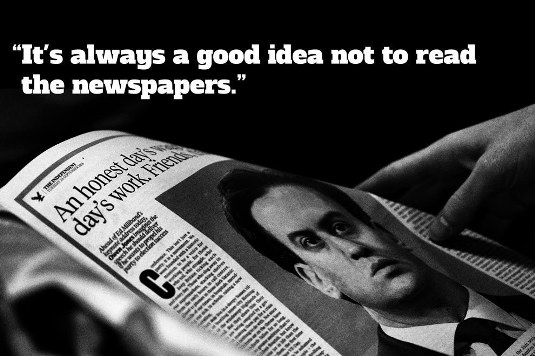 Ed Miliband: “It’s Important To Follow Your Own Path”: Ed Miliband's comments on his news-reading in this Buzzfeed interview became the news about news debate of the week, in all the newspapers. None were impressed:

Instead he prefers to get his information for the US site RealClearPolitics. The St Pancras Intelligencer would of course advise us all to read newspapers, TV news and news websites. The more and diverse news sources the better.

Benedict Cumberbatch reads the 8am news from D-Day: On the 70th anniversary of D-Day, June 6th, Benedict Cumberbatch is reading out original BBC radio news scripts of those events for the Today programme. The scripts have been taken from the British Library's collection. More on this anon.

Sensitive Words: June 4th: The twenty-fifth anniversary of the protests at Tiananmen Square has been widely covered by the world's news media, and in China not at all. The US-based China Digital Times provides an instructive list of search terms which have been blocked on the Chinese search engine Weibo. They include 'today', 'candle', 'six+four' and '占占点' (tanks crushing a protestor illustrated through Chinese letters).

How Hostwriter wants to connect journalists around the world: Journalism.co.uk reports on Hostwriter, a new platform enabling journalists to contact each other for world-wide collaboration opportunities.

A retiree digitizes 27 million old newspaper pages in his livingroom (and libraries fight to catch up): Anyone who has gone searching for newspapers online is likely to stumbled across Tom Tryniski's remarkable one-man effort, Old Fulton New York Post Cards, a collection of 27 million American newspapers digitised by this one retiree. This piece from Reason.com is actually about Brooklyn Public Library's struggle to find the funding to digitise all 115 years of the Brooklyn Daily Eagle - something that Trykiski did solo in five months. In the end they got Newspapers.com to do it for them, without payment, with the BPL being offered for free on the Library's portal but also as part of Newspaper.com's subscription package of 3,000 newspaper titles.

Telegraph increases operating profit to £61.1m and is UK's most profitable 'quality' newspaper: Press Gazette reports that the Telegraph Media Group increased operating profit by £2.7m to £61.2m in 2013, making it "by far the most profitable of the UK's 'quality' newspaper titles", despite falling print circulation. No information has been revealed as yet about the performance of its website metered paywall, introduced in April 2013.

BBC News Division To Cut 500 Jobs: Neil Midgley at Forbes scored a major news media news scoop with his revelation that the BBC is to cut between 475 and 500 jobs from News, with a further 75 to 85 from Radio. The BBC is now indicating that this could be true.

BBC receives almost 1,200 complaints over Ukip election coverage: Talking of whom, The Guardian reports on the barrage of complaints sayig that it had been biased in favour of UKIP and/or Nigel Farage during the European and local elections. It also received 149 complaints that it was biased against UKIP.

Who's behind that tweet?: An interesting piece from Nieman Journalism Lab on how seven news organisations make use of Twitter and Facebook: ABC News, AP, CNN, NBC News, The New York Times, USA Today, and The Wall Street Journal,

Newsquest launches responsive mobile platform for each of its 140 titles across England and Wales: Regional newspapers in the UK are getting that bit more responsvie and smart with Newsquest's launch of a mobile platform for such titles as Northern Echo, Southern Daily Echo and The Argus.

Virtual Newsroom: getting journalism done in a digital age: Sandra Oshiro writes for Poynter on the challenges and opportunities for a journalist working remotely for a news organisation.

A Ukrainian factchecking site is trying to spot fake photos in social media — and building audience: Lydia Tomkiw at Nieman Journalism Lab has a good story on the success of Ukrainian fact-checking site StopFake. 30% of the donations the site receives come from Russia.

How the Kremlin is killing off the last of Russia’s independent media: Russian-American journalist Masha Gessen reports for Quartz on the impending death of Russia's independent news media.

Media outlets love to use citizen journalism, but don't like to say where they got it or how: Mathew Ingram at Gigaom summarises a Tow Center report on the use of user-generated content by TV news organisations, including Al Jazeera, BBC World, CNN and France 24. It gets used, but it doesn't always get acknowledged - for various reasons.

The Art and Science of Data-Driven Journalism: Another Tow Center report, introduced by Alexander Howard, on the important trend towards data journalism, with 14 findings, recommendations and predictions, among which are:

Publishers: There's money in your archives: They are still going on about the New York Times' Innovation report (see previous St Pancras Intelligencers). Here DigiDay focusses on the report's complaint that insufficient advantage was being made of the newspaper's archives. "There may not be much money in reselling archived content, but at least it’s not expensive to produce", says The Economist’s Paul Rossi.

The news in India is all about the news: Handy piece from Quartz on news publishing in India.

India has 12,511 daily newspapers, 161 million TV households, some 2,000 multiplexes and 214 million internet users, according to a report by consulting firm KPMG, which estimates the size of the industry more than 1 trillion rupees ($16.9 billion) in 2014.

Duchess to turn Hogwarts into school for cage-fighters: Thank you Daily Mirror for the headline of the week.

Posted by Luke McKernan at 8:20 AM