Forgotten, but not gone

Google Removes Robert Peston's BBC Article Because Someone Wanted It 'Forgotten': The European court decision allowing individual to request that Google remove links to historical articles which have personal information that they would rather was forgotten may have backfired in this case. The request to have a 2007 BBC News article on former Merrill Lynch boss Stan O' Neal by economics editor Robert Peston taken down has caused the article in question to go viral, as Huffington Post reports. On the same subject, David Meyer at Gigaom looks at other examples of news stories that have been taken down and asks Why is Google really removing links to news articles in Europe?

Welcome: our website is now open to the world: Good news for international journalism students - the BBC's College of Journalism site is now free to use for anyone worldwide (previously there was a paywall for non-UK users), at least for a trial 12-month period.

Once humbled, but now risen: the Murdochs march ahead: How badly do you think things have been going for the Murdochs recently. Peter Preston looks at the numbers - three years ago News Corps' value was $35Bn. Today it is $88Bn.

Attorney General backs down on plan to censor news archives to avoid contempt risk: Attorney General Dominic Grieve has withdrawn clauses in the Criminal Justice and Courts Bill that would have given him powers to order the removal of online archive news stories in the run-up to a criminal trial, reports Press Gazette.

AP will use robots to write some business stories: The future is now. Poynter reports that AP is to start using automation technology to produce stories about earnings reports. "Instead of providing 300 stories manually, we can provide up to 4,400 automatically for companies throughout the United States each quarter", says the managing editor. 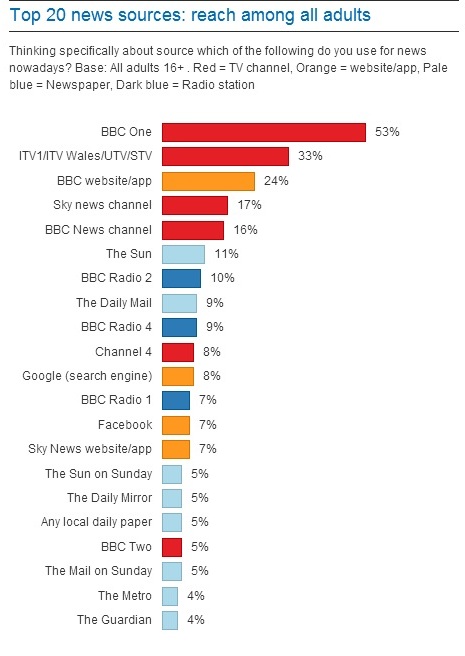 How popular are the internet and apps for news consumption?: Guardian DataBlog looks behind the figures from the recent Ofcom report into news consumption in the UK, whose headline finding was that 41% of UK adults get their news from the internet or apps, just ahead of those who do so through newspapers (40%). Where is Mail Online on the above graphic? Is it not viewed as a news source?

The goal: to provide data for journalists and researchers interested in tracking the media landscape and understanding how political messages — and dollars — move through the system. Using text from closed captioning as well as metadata organized by volunteer viewers, the Philadelphia archive will be searchable by region, station, and date, as well as by campaign issue or ad sponsor.

Citizen journalism pioneer Brown Moses is launching a site for crowdsourced reporting: Brown Moses (aka British blogger Elliot Higgins) has built up great expertise and reputation through his sifting of social media and YouTube to concover information on the war in Syria. Now he's planning a site to be called Bellingcat which will be a home for other citizen journalists, with tools to teach them his trade.

News reference workshops: The British Library is setting up a series of regular workshops for anyone who wants to know how to use our news research services. They're free, and we hope useful.

Why is this lying bastard lying to me?: This blog traces the history of the news interview from the mid-19th century through to Twitter.

'A concrete box full of stories...a building packed with life' - Yorkshire Post's Leeds HQ is razed to the ground: Jill Parkin, a former Yorkshire Post writer, writes wistfully about the demolishing of the newspaper's old home and a lost era of newspaper production.

On-the-run prisoner contacts newspaper over ‘mistake’: We all want our newspapers to tell the truth, even if we are a prisoner on the run contacting the Sheffield Star to tell them they have got details of our home area wrong. Hold the Front Page has the heartening story.