Welcome to the latest edition of the St Pancras Intelligencer, our weekly round-up of news about news. It may be summer holiday time, but there is so much going on - George Clooney taking on Mail Online (and winning), the fallout from the phone hacking trial, BBC TV news at 60 (supposedly), the rise of hyperlocal news, and lots of digitised newspapers being added online. 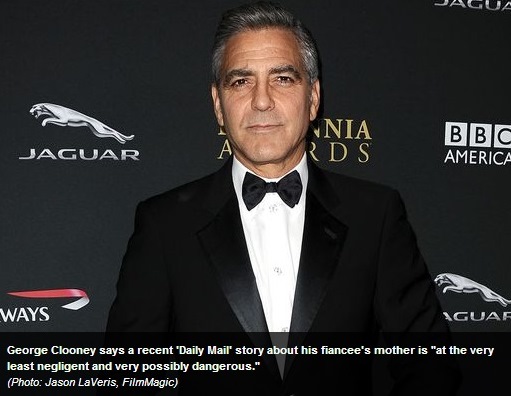 Exclusive: Clooney responds to 'Daily Mail' report: This week's news lesson is that there are some things in this world that wield greater power than Mail Online, and one of those is George Clooney. The American actor reacted furiously to a story about his future mother-in-law via USA Today with a strong critique of its newsgathering ethos. An apology from Mail Online followed swiftly after, and the story was removed  from its website (it still exists, in reduced form, in the separately edited print version).

Of course journalists are "not above the law". But neither should they be subject to special prosecution and persecution, as has happened in the UK over the past three years with the arrest of more than 60 tabloid journalists. Strangely, few of those high-minded media types at the BBC or Channel 4 news now protesting about the jailing of journalists in Egypt have offered a peep of protest about the criminalisation of tabloid journalism in Britain – and not because anybody has taped over their mouths.

BBC TV News reaches 60-year milestone: BBC News celebrates the sixtienth anniversary of its first TV news bulletin  on 5 July 1954., with Richard Baker reading the headlines (he wouldn't be seen on screen for another three years). Strictly speaking, BBC TV news started in January 1948 with Television Newsreel, unmentioned in this anniversary piece, which is otherwise a great summary of how its news has developed into the age of 24-hour channels and the Internet.

Sun on Sunday editor Victoria Newton on Rebekah, Rupert, paywalls and filling the gap left by the News of the World: A great interview in Press Gazette with Victoria Newton, editor of Sun of Sunday, on thriving in a changing world:

Obviously in terms of print it’s a declining market ... A huge chunk of readers went out of the market with the News of the World. About 800,000 readers just went, which is devastating because you find it very hard to get them back – especially in the digital world.

Newspaper industry to review audience count metrics: Interesting. The Drum reports that Newsworks, the marketing body for UK national newspapers is to conduct a review of audience measurement metrics for the industry to reflect the changing ways in which we now read the papers, from print and laptops to tablets and mobile.

The New Yorker alters its online strategy: and while it does so, the magazine will be making making all the articles it has published since 2007 available free for three months before introducing a paywall for online subscribers. The offer starts 21 July.

240,000 extra newspaper pages from 1752-1954: Keen-eyed newspaper archive watchers will have noticed that the number of pages being added to the British Newspaper Archive is double or more per month what it used to be. 240,000 extra pages were added in June for the period 1752-1954, including the Lichfield Mercury, Selkirk’s Southern Reporter, the Whitstable Times and Herne Bay Herald and the Illustrated Times.

Press freedom is being frustrated as privacy becomes new libel: Thought-provoking piece in The Standard from Roy Greenslade on the threats to journalism he sees in the European Court of Justice's 'right to be forgotten' ruling and the UK's Data Protection Act:

Privacy has become the new libel, and the loser in the long run will be the people who misguidedly think of “the media” as some kind of homogeneous evil institution. In fact, it is there for them, not against them.

A $52 million loss, but a good year for The Guardian: Columbia Journalism Review looks admiringly at how The Guardian's ownership by the Scott Trust has enabled it to paper to experiment and expand digitally across the globe. On the same theme, Gideon Spanier at The Independent interviews Andrew Millar, chief executive of the Guardian Media Group in a post strikingly titled The death of the newspaper has been exaggerated (which is not the same thing as the print newspaper, please note). Having an £843M investment fund certainly helps.

Why you can no longer expect that the news will find you: Tom Krazit at Gigaom warns us on how corporations such as Facebook and Google control the flow of news they think we want to see. Talking of which, All Tech Considered looks at searching for news stories on the World Cup and discovers that in Google Newsroom, Brazil defeat is not a headline.

Rolf Harris sentencing made Saturday a good day to bury bad news about the jailing of a national newspaper editor: How Rolf helped bury Andy, with Press Gazette asking why.