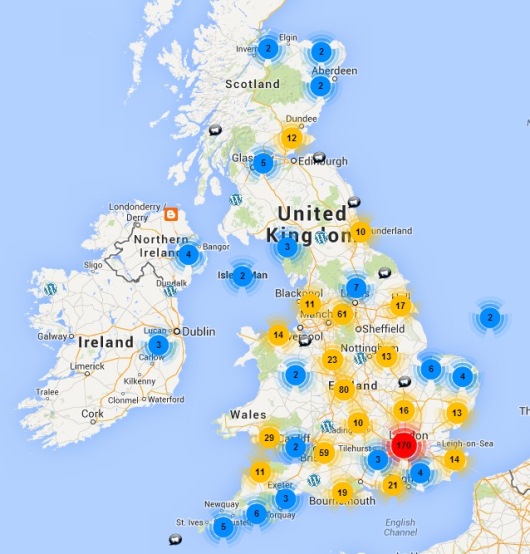 Hyperlocal map: Talk About Local has produced a 'heat map' of the hyperlocal sites around the UK, based on data from the Openly Local database. Delve in and see how the local news made locally revolution has spread.

Report around the clock: Fascinating piece by Joseph Lichterman at Nieman Journalism Lab on how news organisations use time zones to their advantage to operate a 24/7 service, including Bild, The Guardian and Wall Street Journal.

Robots are invading the news business, and it’s great for journalists: So here's a piece of journalism for you:

Alcoa Inc. (AA) on Tuesday reported a second-quarter profit of $138 million, reversing a year-ago loss, and the results beat analysts' expectation. The company reported strong results in its engineered-products business, which makes parts for industrial customers, while looking to cut costs in its aluminum-smelting segment.

It was produced by a robot (a piece of software anywhere) which is generating business news stories for AP. Kevin Roose at New York magazine reckons this bright new future will give human journalists more time to concentrate on less humdrum stories.

The Daily Mail's 'historic 1914 edition' is not quite as billed...: The Daily Mail produced a First World War facsimile issue. Roy Greenslade takes in to task for not being up front about the fact that the 'paper' has been set like a modern newspaper.

Latest ABCs show newspaper market decline running at 8% a year: More from Greenslade, reporting on the latest ABC figures for newspapers, which show a general market decline, though some times (The Times, The Guardian) and beginning to buck the trend.

About i100: First there was The Independent, then there was i, now we have i100, a Buzzfeed-style news site launched this week by ESI Media with a list of numbered stories (called The List), the top one being the most popular (there's a voting system with each story having an 'upvote' button). The top 5 for today are all on the shooting down of MH17 over Ukraine.

The tale of the women who turned vigilante: the BBC News Magazine has been running a series of entertaining pieces by Jeremy Clay on bizarre stories culled from nineteenth-century newspapers. Entitled 'Victorian Strangeness', this example from the series retells an incident from 1878, the moral of which is don't mess with the women of the Forest of Dean.

British blogger Brown Moses launches new site to train others in crowdsourced reporting: Self-taught investigative journalist Brown Moses (aka Elliott Higgins) is looking to pass on his skills to others through a new site called Bellingcat. The admiring Mathew Ingram at Gigaom tells the story.

If newspapers are dying, no one's told the Farnham Herald: Peter Preston agrees with local newspaper publisher Sir Ray Tindle's optimism that print's not dead, yet.

Journalism that matters: Jon Slattery at InPublishing writes in praises of the many examples of serious journalism practised in the UK that make a real difference to the communities that they serve.

The reading experience: This blog writes admiringly of the excellent Reading Experience Database, which reproduces written testimony of reading 1450-1945, including newspapers, and asks what sort of a newspaper history we have if it doesn't consider the readers.

Posted by Luke McKernan at 8:18 AM