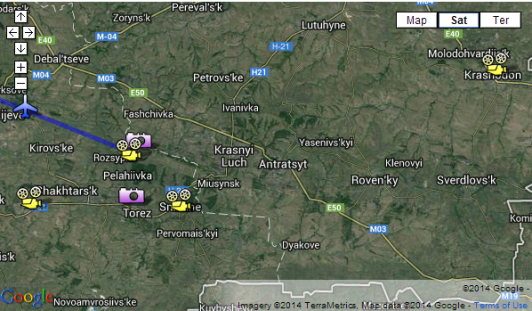 How social sleuthing uncovered evidence of surface-to-air missile systems in eastern Ukraine: News about news has been dominated this week by the shooting down of Malaysian Airlines flight MH17 over Ukraine. This powerful blog post from the NewsCorp-owned verification service Storyful shows how effective it has been at analysing information from social networks, YouTube and other sources to get at the truth behind the claims and counter-claims.

There have been a number of other pieces this week which focus on the verification of information, particularly images and videos, with a focus on Ukraine. The title of Julie Posetti's piece for PBS Mediashift, When Good People Share Bad Things: The Basics of Social Media Verification picks up on the worry people have about sharing false information and explains the verifcation process, which involves the source of a piece of content, and the content itself. Jihii Jolly at Columbia Journalism Review offers help  on How to check if that viral video is true, steessing that the rise in user-generated contents makes it imperative for journalists to question before using. Kevin Loker at American Press Institute gives us How to find out if a photo your friend posted online is fake, and at Gigaom Mathew Ingram says Want to help fact-check breaking news like the Malaysian airplane disaster? Here's how and where you can do it, providing a handy a guide to verification communities and tools.

Graphic content: when photographs of carnage are too upsetting to publish: Roger Tooth, The Guardian's Head of Photography, explains the decision-making process behind selection or otherwise of news images from stories such as Gaza and MH17. (Warning: graphic content).

RT “Covers” the Shooting Down of MH17: Adam Holland at The Interpreter (an online journal presented translated material from the Russian press and blogosphere) offers a scathing analysis of how RT, aka Russia Today, the state-owned TV channel, reacted to the downing of MH17.

Russia Today London correspondent resigns in protest at 'disrespect for facts' over Malaysian plane crash: Press Gazette piece on Sarah Firth who declared that RT's coverage of the air crash was the last straw. "[I]t’s the level of disrespect for the facts that really bugs me." she says. RT commented:

Sara has declared that she chooses the truth; apparently we have different definitions of truth. We believe that truth is what our reporters see on the ground, with their own eyes, and not what’s printed in the morning London newspaper. In our coverage, RT, unlike the rest of the media, did not draw conclusions before the official investigation has even begun. We show all sides of the story, even if everyone else has already decided which side is to blame.

From outrage to recrimination: How the media covered the Malaysia Airlines flight MH17 crash: Chris Boffey at The Drum looks at how the British news media reacted to the immediate news of the MH17 crash.

MH17, my error of judgment: Sky News' Colin Brazier has been roundly condemned for a live news broadcast, lunchimte July 20th, when he briefly looked through the content of the luggage of one of the victims of MH17. Here he apologies via The Guardian in a sincere and interesting piece of how a journalist faces up to horror, while live on air.

South Sudan humanitarian crisis: The poor media coverage highlights the flaws in news gathering: Perhaps the most powerful piece about news production this week has come from Ian Burrell at The Independent, looking at how the absence of media coverage in South Sudan has had a tragic impact on people's lives:

The tragedy of South Sudan highlights a number of basic flaws in modern news. Despite the breadth of online information, the major news providers still play an essential role in bringing humanitarian stories to the public’s attention. It is the misfortune of the starving and homeless in South Sudan that their agony coincides with the appalling turmoil in Syria, Gaza and Ukraine.

Minus proper archives, news outlets risk losing years of backstories forever: Another essential read, this time from Columbia Journalism Review, looking at the possibility and dangers of losing news archives in the digital area.

The 'Fake Sheikh' Mazher Mahmood’s extraordinary career: The career of The Sun and The News of the World's notorious entrapment specialist, Mazeer Mahmood - the 'fake Sheikh' - may have come to an end after the collapse of the trial of singer Tulisa Contostavlos. Ian Burrell tells his story.

High value, low income: report reveals trends in hyperlocal publishing: A handy summary from Journalism.co.uk of the key points from the recent academic report The State of Hyperlocal Community News in the UK.

Readers, viewers, browsers: it's time to count them all and unify the ratings: Peter Preston at The Observer calls for the unification of audience research.

I don’t want cannabilisation of what is our biggest source of revenue (print). The great thing about the regional press is it’s not like the Guardian where people stop buying print and consume online. Actually we have pretty much created a new audience online who never bought us in print.

The Sun says farewell to Wapping with special souvenir staff issue: The staff of The Sun left Wapping on 18 July, as they set up home in London Bridge. Roy Greenslade looks at the souvenir issue produced for staff to mark the momentous occasion.

Posted by Luke McKernan at 8:21 AM