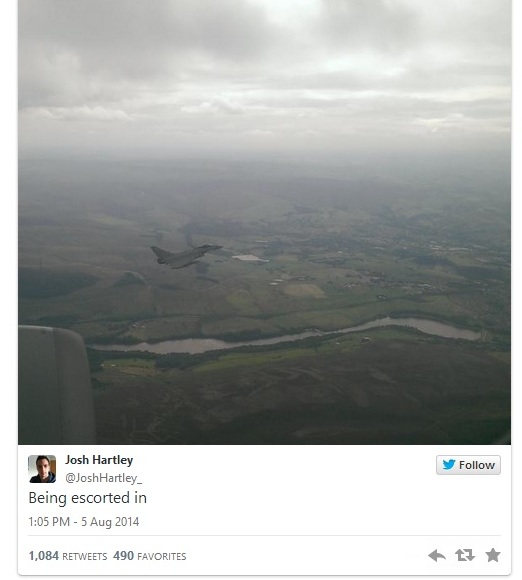 Passenger on plane escorted by RAF to Manchester Airport breaks bomb threat story - social scoops news media again: Anyone can be a journalist - you just have to be in the right place at the right time. Josh Hartley, a passenger on board a Qatar Aiways flight turned unwitting citizen journalist when he tweeted images of a fighter jet escorting the plane to Manchester airport after someone on board made a hoax bomb threat. The Drum reproduces his tweets and those of others and calls it "the latest example of how social media is changing the face of modern journalism".

The bad guys hate me... but most journalists are decent people and are glad I exposed phone-hacking: Nick Davies book Hack Attack, on the phone hacking scandal, which he was instrumental in exposing, has been the hot topic of discussion this week. He doesn't mince his words in this incendiary interview for Press Gazette.

Anonymous sources are vital, but in the end we need to put a name to them: Peter Preston, commenting on Nick Davies' work, argues that the whole truth requires more than "faceless whistleblowers".

How the smartphone ushered in a golden age of journalism: Frank Rose supplies a handy overview of the revolution in how we read the news today, for Wired.

There is only one major news site that both pro-Israelis and pro-Palestinians read: and it is left-wing Israeli paper Ha’aretz, according to Quartz, also our source for this striking graphic by Gilad Lotan for Betaworks.

What Ebola on a plane means for the U.S.: The Ebola outbreak in West Africa is causing alarmist headlines across the world. You wouldn't think Ebola would be high among the concerns of the average American, but it's exciting an obsessive amount of interest there, as in this Daily Beast piece.

Russia enacts 'draconian' law for bloggers and online media: The BBC reports on the new law passed in Russia which says that bloggers with more than 3,000 daily readers must register with Roskomnadzor, the mass media regulator, and conform to regulations that govern the country's larger media outlets.

Should news get personal? Emotion and objectivity in the face of suffering: We were a bit late in discovering this post from Charlie Beckett at the LSE's Journalism and Society Think Tank Polis blog, but it's a thought-provoking (and comment-provoking) piece on whether journalists should get emotionally involved in their stories (with specific reference to Channel 4 News' Jon Snow's The Children of Gaza video.

Posted by Luke McKernan at 8:09 AM